If your methods are good, or even just ok, keeping going at language learning may be the most important ingredient of all when you want to get fluent.  ln a recent post, I looked at the things that fill me with enthusiasm about learning a language.  But what about when enthusiasm starts to wane?  It’s time to move from language learning carrots to things that may work more like the proverbial stick.

We’ve all started a that after a while, some of that excitement and shine can wear off any new project.  In language learning, it’s often called “chapter three syndrome”.  The initial thrill that you’re off on a journey and can already say a few phrases starts to pall as the structures suddenly start to get complicated and new vocab seems to be flying at you from all directions.  Once you’re properly on the road, though it can hit at every and any stage of your language learning journey.

LIke the “Excited by fluency” post, this one is part of the “Dr Popkins Method?” series, in which I’m telling the story of how I’ve got fluent in several languages, to try and lay bare some of the ingredients of success (or warnings about what not to do). There’s an accompanying video to each post, too (link at the bottom).

My clear need for the language (“extrinsic motivation”)

For me a pressing need for my new language has sometimes been a driving force.

The first language focussed on seriously as an independent adult learner was French.

I was eighteen and I’d already become fascinated by languages but I wasn’t just dabbling because of a rising fancy. To pass the entrance exam to study history at my university, you had to translate a short passage (about 300 words, I think) into English from Latin, Greek, French, German, Italian, Spanish or Russian.

I’d done German for two years aged 12 to 14 and dropped it at the first opportunity.  The only other language I’d done was French, for five years (aged 11 to 16). Although I could barely say a thing in it, for me it was only the only game in town, like it or not.

Three years later, I chose to stay on at the university to do postgraduate work in Russian history.  The choice of specialism was party because it would give me the chance to learn Russian and spend a year in Russia.

Once I was on that Russian history path, though, getting good enough at Russian to read my sources was imperative.

It had to happen as quickly as possible, too, as every month of delay meant burning through a month more of my grant funding.

To add to my feeling of discomfort as a newbie to Russian studies, most of my fellow beginning doctoral students already had a master’s degree in some aspect of the subject and a good knowledge (at least in reading) of the language.

I couldn’t get started at the research proper until I’d made great strides with the language.  If I failed at the first hurdle, it would have meant abandoning my doctoral plans, with all the disruption and embarrassment that this could have caused. 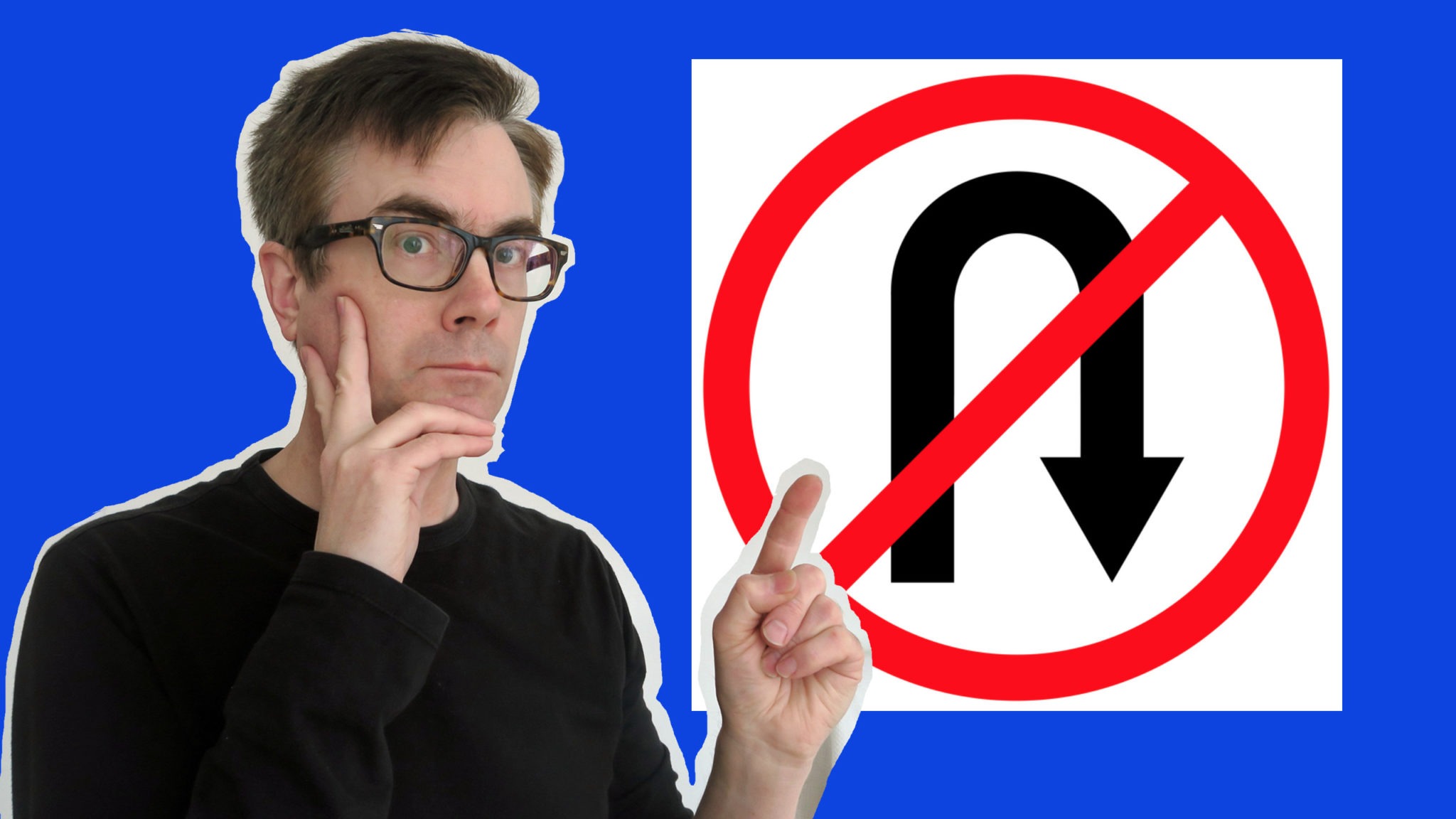 You turn if you want to. The Dr’s not for turining.

German is useful for a specialist in Russia, but it wasn’t essential.  I began German towards the end of my first year as a grad student simply out of unbridled enthusiasm.  The prospect of getting fluent in Russian and living in Russia was not enough, you know?  l wanted to speak German and live in Germany too.  Greedy?  Moi?

My travel plans worked out and I actually got to spend eight months in Germany directly before my research year in Russia.

When I arrived I Freiburg-im-Breisgau, I needed the language in order to find somewhere to live.  Isn’t that what they mean by being thrown in at the deep end.

I returned to Germany two years later.  By this stage my post-grad grant funding was exhausted but I still hadn’t finished writing up my thesis.

By a stroke of luck, my supervisor had moved to Heidelberg and offered me a one-year part-time job as his research assistant.

The only hitch was that, to take this up, I needed to matriculate at Heidelberg university.  My fluent but still rough-and-ready everyday German was not going to suffice to get me through the necessary language exam, the Prüfung zum Nachweis deutscher Sprachkenntnisse (now the Deutsche Sprachprüfung für den Hochschulzugang).

No certificate, no job.  A summer of focussed work on German was called for.

After the research job finished, I made my living in Heidelberg by combining English teaching with work as a waiter with a company who sent teams of serving staff to large one-off functions such as weddings, New Year parties and corporate celebrations.  Everything was in German and the more formal the functions, the less comfortable it felt if you couldn’t understand something. I remember the supervisor barking at me one New Year’s Eve event that I should “learn German first” after I had got the wrong end of some instruction.

After my first degree and before I started as a post-grad, I took a “gap year” in Wales to learn Welsh.

With that language there was no such concrete push factor.  It was a project purely for my own satisfaction.

You don’t even need Welsh to “get by” in Wales as the dominant language is English.

All the same, there was still a milder driver in play.

My family and friends all knew that I had “gone to Wales to learn Welsh”.  I would have looked pretty silly if I’d given up without actually getting fluent.  Some “face” was at stake.

Having a plan, goal setting and a study habit

Some people prefer a “take-it-as it comes” approach, but I like a plan to structure my language learning.

I usually had a main self-study textbook or two to provide roadmap to my language learning projects.  I’ve also used themed vocabulary book for a systematic full-frontal attack the mass of vocab you need to get fluent in a language.

I could then set completion of such textbooks or vocab collections as the goal for the first stage of learning a language.  For example, I’d give myself six months to work through a course book or a year to learn several thousand words.

I could then work out intermediate, shorter-term goals, for example one chapter every two weeks or one hundred new words week.

My regular work to move towards such goals became a learning habit.

I’ve become convinced over the years that habit is actually more important than motivation in language learning. After all, motivation waxes and wanes.  It can be influenced by random factors like how bright and sunny the day is and what we had to eat for lunch.

Not that motivation and habit are necessarily opposites, though.

Keeping to a plan and thus achieving those short-term goals sometimes also boosted my enthusiasm.  Even not wanting to break a successful “run” of sticking to a daily or weekly study plan (e.g. thirty minutes at least five days a week) would sometimes spur me on.

This could sometimes be a double-edged sword when I fell off the wagon.  Yes, of course, I’d often fail to achieve what I’d planned or break my habit for a while.

But with good materials charting a clear pathway that broken up into clear, natural segments (units of the book) I knew what to do to get back on track.  I could adjust short-term goals quite easily and maybe still even meet the larger goal (or at least just push that back a bit and reschedule the interim stages).

Judicious use of group classes

Another way I’ve tried to keep myself on the straight and narrow at various stages in my language learning life has been to take evening or weekend classes or an intensive summer or easter school in the language.

Now, I’m always cautious with classes.  In a group  you’re getting less focussed attention than in a one-to-one lesson.  It’s easier to hide behind other students or put responsibility for your progress onto the teacher.

Still, from time to time, over the years, I’ve taken once-a-week lunchtime or evening classes in French, Russian and Basque and some other languages (Hungarian, Finnish).

I don’t expect any magic from such classes. They have helped, sometimes just for a change, sometimes.  Classes have been a chance to get corrective feedback, build some camaraderie….and (yes) benefit from some great content from inspiring teachers.

It’s harder to do intensive courses now I have a job.  Two years ago, though, I did a month’s residential Basque course at the Maizpide residential language school at Lazkao (south of Donostia/San Sebastian).  I did this by combining some regular annual paid vacation with a some unpaid leave.

Creating a social context and community

Another thing I’ve always done over the years to reinforce my learning has been to make sure as soon as possible I put myself “in harm’s way”, in situations where I’ll be expected to speak the language.

This works better if I’ve already done some effective foundation work. That’s usually been the case before I visit a country where my target language is spoken. There’s a balance to be struck between “speaking from day one” and blundering out into the field with no structures and no phrases to draw on, isn’t there?.

I’ve certainly found that by insisting on using the language, avoiding the “ex-pat bubble” and getting involved in activities around a shared interest (not related to the language through which it is pursued) creates situations use of the language, erm, goes without saying.

Over the years, the initial push factors that have spurred me with a language have fallen away.  That’s only natural.

I passed that French exam. I do not need Russian or German at the moment with my job.  But, because of other choices I’ve made, other interests and personal connections that have developed, I’ve continued to use the languages and thus to get better at them.

The more I’ve got into the culture that comes with a language, the more I’ve wanted to continue to learn.

Then I can go back, set myself goals, start studying again when I want to improve my abilities in a certain area, talk about new topics, use the language in a new context, or just to freshen things up. Doing language exams have been a great way for me to do this.

What about you and what’s next up in the “Dr Popkins Method?” series?

So, those are some of the ways I’ve kept going with my language, even at times when I might have feel like giving up.

Have these strategies worked for you too….or not?  Are there other ways you’ve found to keep yourself moving forward? Let me know in the comments below or drop me an email (address under the “About” tab).

Next up in the “Dr Popkins Method?” series will be some quick-fire takeaways on how I’ve got fluent and how you can too.

(1) Is there a Dr Popkins Method to get fluent?