This is the first occasional post in which I’ll be sharing personal stories from my language learning life.  Highs or lows, big or small, they’re some of the things I have in mind when I say that languages have enriched my life so much. I hope they’ll help inspire you to get started or to keep going on your own language journey.

It’s often those small practical triumphs when you’ve recently started a language that stick in the mind.

One of mine in German was particularly urgent.

I’ve spent three extended periods in Germany.  This win comes from my first visit, when the aim of the trip was to learn to speak the language.

It was 1991 and I was a twenty-three year-old second year doctoral student. I was going to Freiburg at the start of a semester at the university on the European Union “Erasmus” mobility scheme.  It wasn’t the regular, undergraduate programme.  The scheme – I think it was called “Free Mover” – gave me a small travel grant and, crucially, allowed me to register at the university without satisfying the usual German language requirements.

My research field was late Tsarist Russian history.  Although I’d barely started learning Russian before I returned to Oxford as a doctoral student, during my first year back I greedily started learning German too.  The beginning doctoral research is challenging enough even if you’re already good at the language(s) you’ll need, this is not a responsible course of action.  It was very hair-rasing, but it worked…in the end. 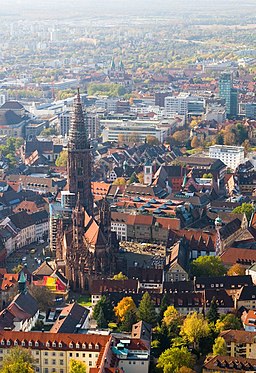 I chose Freiburg for my Erasmus stay because it’s one of the centres of Russian and East European Studies in Germany.  One of my Oxford supervisors had himself done his doctorate there and then worked there as an assistant professor.  He was thus able and willing to help me arrange the stay with his Freiburg professor, Gottfried Schramm.

My one German acquaintance in the town was a super bright Egyptologist by the name of Jörg, who’d been a visiting student in Oxford the year before. He kindly offered to let me sleep on his floor until I found somewhere to live.

This was quite inconvenient for him, as he only had a small studio flat. I needed to get myself set up fast.

In Oxford a Welsh friend of mine knew a girl who’d had spent a year in Freiburg eighteen months before and from her I had a list of phone numbers of potential landlords. That was a godsend in those pre-internet days. My task was to work down the list of numbers from the payphone on the street outside Jörg’s apartment (no cellphone then, either).

I’d been learning the German for about six months and had covered all the grammar and a core vocabulary, but was unable actually to say much beyond “Student, Student, Zimmer bitte”.

It wasn’t quite what you’d call fluency, but it worked.  There was a string of negative calls.  Then, one one call, an  elderly lady paused at the other end of the line and said that she “might have a room”.

I went to visit her and the deal was sealed.

She was the daughter of a university professor and the house was a lovely dorma bungalow in a lovely, leafy bourgeois suburb of the city.  I think the family had the house built in the interwar period and not much had been done to it since, apart from the occasional lick of paint.

The house was full of her father’s books and her own acquisitions. Often on a Sunday, she’d invite me to share a meal with her. She wasn’t a very good cook, but it was a nice gesture.

She’d been a young woman during the war and when French set up their HQ in Freiburg at the end of the war and we had interesting conversations about the Nazi and immediate post-war period. I remember my shock when I once opened an interesting looking volume and saw that the postcard lodged inside it as a bookmark happened to have a stamp with Hitler’s head on it.

The war had finished forty-six years before but the consequences – the divided, occupied Germany – were very much present.  The country had only been unified three months before I arrived.  In Freiburg, the French still had barracks.

The Canadian army base was a short distance away at Lahr.  I spent a weekend there, staying with my Godmother’s brother and his (Canadian) wife, who was a librarian at the Canadian camp.

Another weekend, they took me on a trip to Heidelberg.  That was my first visit to a city that, two years later, would become my home. 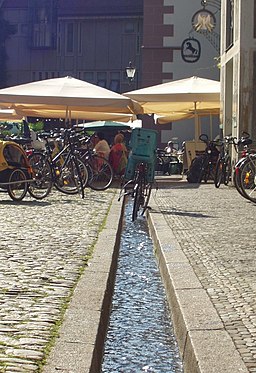 One of the Bächle in central Freiburg (photo: Phillipp Herzog)

Freiburg itself was beautiful, with its sandstone minster, historic gates and little gutters of glistening water- the Bächle – running  down some of the streets of the old town.  Major local pastimes were walking, skiing and cycling in the hills of the just outside the town.

The geography of Freiburg, tucked in the far south-western corner of Germany means that the French and Swiss influences are very strong.  During the long vacation, students went to Switzerland to earn even better money than they could earn in vacation jobs in Germany. It was common for people to make trips to Strasbourg and a group of us went to the opera in Basel.

Back at Frau Frickenhaus’s, my room had an old wooden bed which wasn’t quite long enough (and I’m only 5’8″).

My room also had a bulky antique wooden wardrobe and a work table (the absence of the latter is always a deal-breaker when I’m looking for a room).

To this furniture I added that essential high-tech learning aid in those pre-internet days a weighty “portable” television, bought out of my severely limited fund of precious Deutschmarks.

Ok, so my new accommodation wasn’t the dream billet but it was ok and – a really important factor – at around (if I recall correctly) about three hundred DM a month, really very cheap.

Germany seemed in some ways quite exotic.  Oddities included having to register my residency (Frau F kept saying “anmelden” (which I had to look up), vending machines on the street corners which sold cigarettes (3 DM 50 or 4 DM), students who always seemed to be drinking milk, students in leather jeans… Then there were the iconic “so bad they’re good” East German “Trabant” cars which it was fashionable at the time for students to pick up for a knockdown price and bring west.

The university was my first introduction to the relatively impersonal “mass” higher education system of Germany, with its complete separation between administration and teaching.  Relations between students and faculty members were generally much more distant (at least at the undergraduate stage)  than I was used to.

The “mensa” was a massive cafeteria which fed huge numbers of students cheaply and quickly……  Mostly the food was fine, some sort of soup with breadcrumbs, curry or bolognese, Schnitzel and fries, a side salad and some fruit or a pudding made from a powder.  One day, though a German dumpling (Klöse) was served, bigger than a tennis ball, with some sweet red berry sauce as the main (and only) course.

I was a bit of an oddity to them due to my young age (for a doctoral student).  Many of the undergrads were the same age as me and astonished to hear that in Britain, we usually finish our first degree aged 21.

During my stay, the first Iraq war was raging and I remember a protest of taxi drivers.  They snaked slowly round the town in a cavalcade of gas-guzzling Mercedes, horns blaring.  The seemed unaware of the irony that they could only do this thanks to cheap oil secured by American power.

It was an intensely frustrating and dispiriting time for me on the academic front, narrowly defined. I was struggling (and I mean struggling) to read nineteenth century Russian law reports in the university library. I spent the next year in St Petersburg and it was only many months into that trip that I started to get a sense of progress in my research.

In the wider academic and social sense, though, things were good. I was also taking part in Professor Gottfried Schramm’s undergraduate and post-graduate seminars, if rather passively….I remember he once swung round and pointed at me during some discussion: “Sie haben noch nichts gesagt”. Cue flustered banality in broken German. 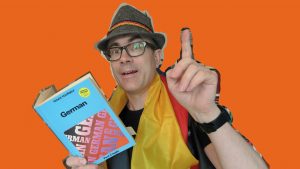 Thanks to my basic German, I got a good circle of friends amongst the German students, including a couple who went on to have careers in Russian history and another who is a successful journalist.

A small group of us Russianists used to meet in one student’s apartment on a Sunday night to read Eugene Onegin out loud in Russian.  One of the professors in the English language and literature faculty ran a class on the side in Welsh, so I got to know a couple of German students who were learning the language, one of whom later went on to write a German-Welsh phrasebook.

One student I knew dropped out to study bookbinding.  A good aspect of the German system is that there are respected apprenticeship routes available to high-status, well-paid craft and practical careers if you decide that academic study is not for you.

Today, some of my closest friends are those I met at Heidelberg on my second German sojourn two years later.  I did make a trip down from there to Freiburg from there to meet up with some of the old Freiburg crowd.  I’m afraid, though, that I lost touch with all of them pretty quickly after.

That’s unusual for me.  I’m not sure why….Maybe because there was so much going on and I was so mobile for the coming few years and….once again….because it before the internet made it so much easier to keep in touch, however tenuously. 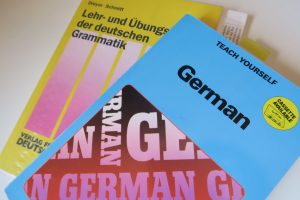 Some materials from my “Freiburger Zeit”

After the end of the summer semester, I stayed on as long as I could, making the most of summer life in lovely Freiburg and the surrounding Black Forest.  I had the house to myself for several weeks as Frau Frickenhaus fell and was laid up in hospital.

On the 18th August 1991, it was finally time to return to the UK for a two-week turn around before my upcoming year in the Soviet Union working in the Central State Historical Archive in Leningrad.

My first night back in Oxford, I stayed in the house that my sister shared with other undergraduates from her college. The following morning she woke me to tell me that there had been a coup in the USSR. For a day or two, it looked very unlikely that I’d able to start my stay in Leningrad in September.

The rest is history…. The coup failed and on 1 September I flew to Leningrad. During the year that I was there, the city became St Petersburg again and the Soviet Union ceased to exsit….But that’s a whole other story.

Back in lovely Freiburg, I was thrilled that I’d finally realised my dream of living abroad.

Aside from that Russian reading, I was totally immersed in German, working on the language and making a lot of progress.  I only knew very basic German when I arrived, but I was certainly at intermediate level when the time came to leave.

It all started with that early win in on the accommodation front….Thanks to my broken German, a list of telephone numbers, Jörg and Frau Frickenhaus.

Do you have stories from your language learning life that mean a lot?  Let me know in the comments below or drop me an email.

If you’re interested in starting German, drop me a mail or let me know via the Facebook page.  I’ll be running a three-month on-line course with mentoring for beginners and re-starters starting in September.

Which German exam is best?

How to prepare for an advanced language exam. Lessons from my Goethe-Intitut C1 success