Should I do a Goethe Institute Exam? Should I do the DALF? Should I take a TRKI Russian exam? Should I take the HSK exam? Do I need the IELTS? If you’ve asked yourself questions like these and are wondering is it worth taking foreign language exams and getting a langauge certificate, this piece is for you. It’s the first in a short series of posts on whether and how to do language exams.

If you’re studying a language in school or college, you’re obviously going to have to take exams to graduate. In other disciplines, your institution may require you to pass a minor in a language. The exams you’ll take will probably be “internal” to your institution.

Our focus today, though, is on “external” exams, open to the general public. Besides the Goethe Institut exams, French ones such as the DILF, DELF and DALF, the English IELTS and the Russian TRKI, there are a host of other tests in these or other languages.

In general, all these exams share two key features.

First, they are “official” (often administered directly (or to some degree supported indirectly) by the relevant governments, other public agencies or a respected body such as a university).

Second, they are designed to reflect an agreed attainment scale. For the European languages, this is usually the Common European Framework of Reference for Languages. They range from Level A (“Basic user”), through B (“Independent user) to C (“Proficient user”). 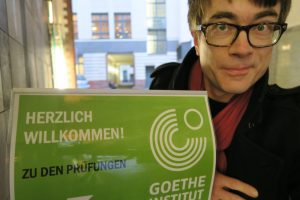 Exam day at the Goethe-Institut, Berlin

When is certification compulsory?

Beyond your high school or college, there are some situations in which you simply have to get certified.

Admission to post-graduate courses in language-related vocational disciplines such as translating and interpreting often require a language certificate.

If you want to go and study another subject in a country where your foreign langauge is the medium of instruction, you’ll probably have to have a langauge certificate.

There’s no escaping that a language certificate is sometimes a prerequisite for gaining a visa or for citizenship.

With thousands of applicants for the stamp or the passport, a certificate at least provides the authorities with a rough indication that applicants are serious about their commitment to their new country and are going to be able to integrate linguistically.

You may also have to be able to certify your level to be considered for some jobs. Here, the piece of paper may be useful to narrow down the field before the real selection process begins.

Otherwise, though, when the choice is up to you, is it worth the hassle?

It isn’t difficult to find critics of the whole exam shebang.

Exams only make you good at exams

There’s no denying that foreign language exams can be pretty artificial. I mean, how often except in exams do you have to write an essay with a strict word limit under time pressure?

Unless you’re a journalist, copywriter or maybe, erm, a blogger….

The tasks you’re asked may seem of limited relevant to real life.

It’s as if you’re jumping through hoops just to impress a teacher, some other authority or your family and friends.

Yet as a learner once you’re outside formal education system, it’s likely that impressing others is not what you’re about.

You’ll want to get up and running as quickly as possible to use the language in real life situations: to get things done, travel better enjoy culture, or connect with people.

You don’t just want to be working to the test.

If you need a language for a job, you may find that a potential employer will be more interested in your practical skills than in any piece of paper. Selectors may simply get you using the language as part of the selection process. Maybe on a tour of the workplace or during the interview.

I’ve been interviewed entirely in Welsh and Russian (successfully). I once went through a whole assessment day for a management consultancy role in Münich in German (I didn’t get the job, for reasons other than language. I still felt I’d done rather well to get that far as a realistic candidate).

Nobody asked me for a certificate on any of these occasions.

Certificates are not always a reliable indicator of current ability

After all, you are either at a certain level or you aren’t. If you are, you can strut your stuff without a certificate.

If you aren’t, a certificate won’t magic away the problem.

I have met people with certificates who say they don’t feel that they are really at the certified level (I still feel a bit that way myself with my C1 Russian writing).

From an objective perspective, though, as the corners of that shiny once-shiny certificate turn yellow, perhaps your language skills will go rusty too.

Your result is just a snapshot of your level at a particular point in time.

Also, not all exams test all four skills (reading, writing, speaking and listening). The first two HSK Mandarin exams, for example, do not test writing, for example.

Getting a certificate costs too much money

To sit foreign language exams, you usually have to pay a fee.

If you’re on an average salary in a wealthier country, the cost may not be the issue.

It’s always worth doing some work with a teacher though.

For that all-important corrective feedback you need more than the casual, inexperienced encouragement of the typical exchange partner. A good teacher is great for help with techniques and tactics, too. Yet the lessons can get expensive.

Getting a certificate wastes too much time

Are there any negatives that I’ve missed?

If you let me know in the comments below, I’ll try to counter them 🙂

Here’s the thing: as regular readers will know, I’m a bit of a fan of exams.

Of course, this is partly because I need certificates to shore up my low self-esteem. It’s a (doomed) attempt to look good in front of others 😉

Still, I’m sure that YOU don’t have such needs, so let’s look at some more worthy arguments in favour of running the exam gauntlet.

From Russia with love? Me and my TRKI 3rd Certificate

Taking an exam is a great motivator

If you book yourself in for an exam in good time, you’ve at once set yourself a measurable, medium-term goal to aim towards.

Choose a level which will stretch you, but not too much.  Or, if you prefer, aim really high on the principle that if you shoot for the stars, you may, at least, get to the moon.

I like to have a six-month run up period, though most of the serious hours get put in during the final three months. By then, the exam is firmly on the horizon. It’s sufficient time to be able to make a difference, but not so much that you can keep putting off work.

As the pressure mounts, you’re likely to get more done to improve your grasp of the language than would otherwise have been the case.

For me, it’s no difference from training for a marathon or to climb a mountain.

I do recognise that the motivational value of the aiming preparing for an exam will vary from person to person, though. I guess it’s mainly going to appeal to more introverted types.

Putting an objective yard-stick up to your language abilities may sometimes hurt but better the truth than self-deception.

Let’s face it, people are notoriously subjective in their claims about their own linguistic abilities. Once you’re in that exam room, there’s nowhere to hide.

Even if others are sceptical of your subjective claims, it can be difficult for them to assess you themselves on the basis of a short encounters such as a job interview.

You may talk quite a good talk, but what are you like on paper? Will you be able to read those technical reports quickly? It makes sense to ask for a certificate, at least as a first step.

More than this, if your foreign language exam is from a well-known board or otherwise calibrated on an international scale such as the CEFRL, this objectivity will travel wherever you need to prove your skills.

It also provides a way of comparing abilities across different languages.

If you only want to speak or are a book-worm who just wants to read, you may object. Then again, the skills cross-fertilise. You may be able to say quite a lot, but how much value is that if you’re listening skills lag behind and you can’t follow the answers?

At the higher levels in particular, you are much less likely to get good at speaking like a literate native if you haven’t read and written a lot.

It’s an absolute benefit to be forced through your paces in all the skills. It’s cross-fertilisation and it’s for your own good, whether you like it or not 🙂

The skills tested are transferable

Of course, there is an element of artificiality in any examination exercise. That doesn’t mean that what your asked to do is a total irrelevance to “real life”, though. It’s true that some exams have a more real-world orientation while some may still take a more academic approach and may stress more formal registers.

In general, though, the examination boards want their qualifications to be seen as relevant and aim to make them so.

Reaching the level once proves you can do it again

I don’t totally buy the argument that certificates provide a snapshot of little use later on.

It’s true that if you don’t use a language you can go rusty.

It isn’t a black-and-while “use it or lose it”, though. At the higher levels in particular, you can put your language on ice and then defrost it later.

If you need to, you’ll be back up there in a matter of days. I’ve done it with French, German and Russian over decades.

The “stale certificate” argument has more force when you have only attained an elementary or intermediate level. If you stop flapping your wings before you’re into orbit, you’ll probably crash back to earth.

Nevertheless, you’ve shown that you had it in you to reach A1, A2 or B1.  So, you can do it again – from scratch if necessary (if practice, I bet you’d find there’s still “something in there” to dredge up from your previous efforts).

What do you think?

There are the pros and cons of getting a language certificate, as I see them.

For me, language exams are a very useful motivational tool. They have provided useful structure to my language learning and propelled me further than I think I’d otherwise have gone.

If you want to know more about what it’s like preparing for a language exam, you may like to catch up on my own experiences sitting exams in German and Russian.

Do you agree with my up-beat views on the exam game or do you get your motivation in a different way?

Let me know in the comments below and look out for the next articles in this language exam/language certificate series.  Number two is “How to pass a foreign language exam“.  Number three is on dealing with exam nerves. 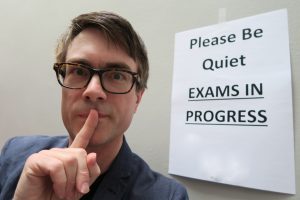