In April I paid my first visit to Tenerife. The reason: to take part in a workshop with fellow language teachers, bloggers and vloggers. We spent four days in a beautiful villa near Los Christianos in the south of the island. 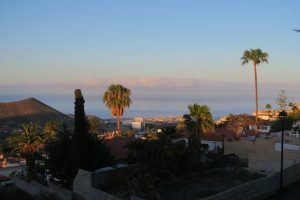 The view from our villa

We also did a day trip up to La Laguna, the original capital of the island and to the beautiful hills and coastline around.

During the workshop, we were taking apart each other’s work and assumptions and suggesting ways we could each improve.

My colleagues challenged me to explain to you in a more personal way how I’ve got fluent in several languages and got up and running – after a fashion – in several others.

Does what I do amount to a bespoke “Dr Popkins Method”?

If so, am I putting that out there as well as I might to help you in your language learning? 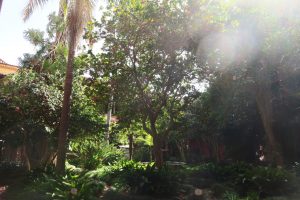 A courtyard garden in La Laguna

It’s four years since I started blogging here on Howtogetfluent. In that time, I’ve covered several of my own language learning projects in detail.

From the start I’ve been talking about learning Basque. I’m doing this from scratch, snatching such time as I can from quite a demanding job in the law and alongside the rest of my life.

I’ve also told you about how I’ve been levelling up my already not-too-bad German and Russian. I blogged on taking the German Goethe C1 exam in 2015. Then I went for the equivalent Russian exam, the TRKI third certificate, passing four parts in 2016 and the final part (and thus the whole exam) in 2017.

The first was a week learning basic Indonesian on the beautiful island of Java (check out the daily travel vlogs if you haven’t seen them; I think they’re among my best).

Then, last autumn, I threw myself into beginners’ Icelandic, before my first trip to Iceland.

This year, though, I’ve been focussing much more on considering general language learning questions. This site is called “How to get fluent”, after all.

But what about learning principles?

The challenge, then, is to bring these two strands together: practical projects and underlying principles.

More than that, I want to bring in my thirty year back story as a serious language learner.

I’m up for the challenge of telling my own story in more detail and we’ll see what emerges at the other end.

I’ll say now, if you’re expecting some magic method or a silver bullet, you’ll be disappointed.

It’s not an accident that there’s a question mark at the end of the title to this series. I’m instinctively sceptical of magical language learning methods…

I think, though, that most of you will be too.

The thing is, as I correspond with Email Club members and read comments at the bottom of posts, I’m struck by the high calibre and sheer accomplishment of the average Howtogetfluent reader.  You may be unsure what to do in language learning, but you’re not expecting “something for nothing” in the quest for fluency….

There’s been a good deal of trial and error along the way.

Often it’s felt like the weakest link has been, erm, me.

Straight in at the deep end!

The “Dr Popkins Method?” project kicked off straight away in Tenerife, in vlog form.

I shot the first video in the series on the side of the pool.

At the end, I was actually a little too close to the side of the pool….. The camera was running as I was edging along, trying to find the best position from which to dive dynamically into to the water and swim off determinedly into the distance.

That, at least was the plan.

Instead, I slipped right in.

I’m sure there must be an EU Regulation against using gloss paint on the edge of pools.  It took my ankle three months to recover from the sprain.

Before you say it….several wags have already pointed out that this clears up the question of my method. 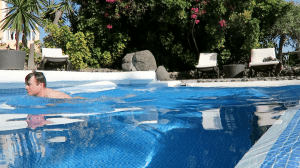 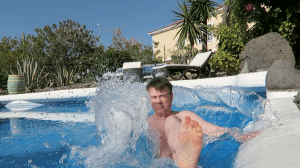 In addition, I’ve begun the “Momentos” occasional series here on the blog. They vignettes here on the site from my own language learning life over the last three decades.

Some of them “Dr Popkins Method?” videos are already up over on the YouTube channel.

At the moment the plan is for six video instalments.

I’ve decided to post on this here on the site too. The written word gives me more space for a bit more detail. Plus, I know that some of you are a lot less into YouTube than I am.

I want to tell my own personal story, with my best languages: French, Welsh, German and Russian but also with the five or six others I’ve worked on to a less than fluent level.

I’ll look at my personal strengths and weaknesses.

Then I want to look at why I was – and am – excited by languages in the first place….

…and how I keep going even when it doesn’t feel like there’s any progress or when that initial excitement starts to wane.

At the very least, this project will help me get clear on what I’ve done and how it’s changed over the years.

Fact is, even if I still have to go, I’ve gained massively in experience over the years.

I’ve trained as a Welsh and English teacher…. What could possibly go wrong 😉 ?

As you follow my story maybe you’ll think “Ah-ha! that’s where I’ve been missing the ponit”.

You could equally think “Ah-ha! glad I haven’t made the same dumb mistakes as you, Gareth”.

Either way, I hope you’ll find the series worth checking out.

It’s a good opportunity for us to get to know each other better as language learners and as people…..So please tell your own story in the comments below or get in touch by email (address under the about tab).

And for those of you who DO share my love of video, here’s the first episode in vlog form too.

Look out for upcoming posts in the “Dr Popkins Method?” series!