I’ve been back from my first ever visit to Iceland for three full weeks now. Since then, I’ve also been on a work trip to Dubai. That’s my excuse for the delay in reporting back at the end of my 30 Day Focus on Icelandic. This language “sprint” culminated in a three-afternoon class in Reykjavík. I’ve made a short video of my experiences which I hope will inspire you to try combining language classes with travel, whatever your chosen language. The link to the video is at the bottom of this post.

To recap, I had the goal of studying thirty minutes Icelandic a day in the month before my trip.

Altogether, during the thirty days, I did something every day except two.

In total, I clocked up twenty-four hours preparation, including seven and a half hours’ Skype lessons.

Here’s the time breakdown of how it went:

How I used the pre-course study time

As previously reported, I’d already been doing some basic study on and (mainly) off for the previous nine months. I had clocked up ten thirty-minute sessions with a teacher on italki.

We focussed on the pronunciation of the dialogues in Colloquial Icelandic by Diasy L Neijmann. I’d worked through to the end of Chapter 5 (out of 16) of the book, although I didn’t fee I’d internalised the content.

During the thirty days I continued working with my original teacher and also started to take lessons with a second teacher, also through italki, to keep it varied (and to give me an increased number of potential timing slots to choose from).

Colloquial Icelandic continued to be very useful both for self-study and with my teachers. Due to time pressure (the need to complete the Icelandic Online course – see below), I stopped working thoroughly chapter by chapter. Instead, I did more skipping ahead to focus on the dialogues in each chapter, reading them and trying to work them out. I got through the dialogues up to the end of chapter 8 (that’s halfway through the book). When I return to the chapters more thoroughly, more will stick.

My new teacher also used Íslenska fyrir alla by Ólborg Jónsdóttir. It’s a multi-volume series all in Icelandic, with lots of clear, illustrated exercises, which we did during the lessons.

Much of my self-study went on trying to complete the Levels One and Two of the free Icelandic Online course which we had been told to get through before our classes in Reykjavík began.

The online course turned out to be extremely time-consuming. It didn’t help that there is no indication on the course how long each unit is supposed to take. There’s a huge amount of material.  I quite liked the intuitive approach but I still think a physical book and exercises with a key gives me the change to get more of an overview.  Old-style study also gives me more control and a break from the world of screens.

In the pre-course Facebook group people were getting increasingly panicky or frustrated about not having completed it. I only got to the end of lesson 2 (of six) of unit 5 (of six) of the first course. I was worried I would not be admitted to the course. It was a relief, shortly before I left for Iceland, when the organisers told us not to worry. 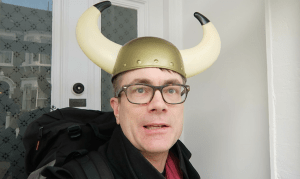 Top tip: dress to blend in to increase your chances of striking up a conversation with the locals

I had a spacious airbnb apartment Reykjavík for eight nights, Sunday to Monday.

Monday was for exploring. I was unlucky in that a lot of the museums and galleries are closed (Berlin-style) on Mondays. Still, got a good sense of the layout of the city and climbed the tower of the famous Hallgrímskirkja. 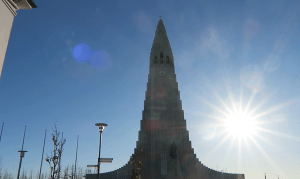 Let there be light! Hallgrímskirkja (the day after the grey day I forked out to go it the tower) 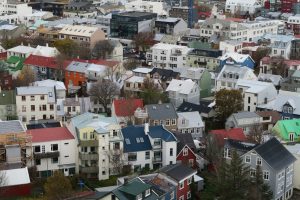 Colourful Reykjavík, from atop Hallgrímskirkja

The Monday weather was grey, in contrast to the three days of blue sky and sun on Tuesday, Wednesday and Thursday.

It was on these three mid-week afternoons that the “crash course” took place, as part of the programme of the fifth Polyglot Conference.

In class and after

Only one or two of the ten students had finished the whole of the two Icelandic Online courses. We had all done varying degrees of other preparation. As a result, there was some variation in levels, with one or two students already being able to converse quite freely and others of us (such as me) hardly able to say a thing. There was no feeling of judgement, though. Everyone was simply very engaged and enthusiastic about learning the language. 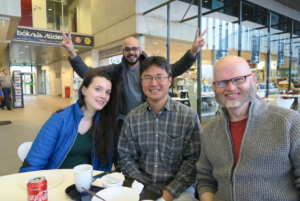 Our teacher Sirí (also a speaker at the Polyglot Conference) is a very experienced created a very relaxed ambiance with lots of breaks (which always goes down well with me, especially as there was a good espresso machine in the kitchenette in the corridor outside our classroom).

Sirí generally stuck to Icelandic as the medium of instruction. This is where my preparation really helped. I found that I could follow enough of what was going on to feel at home. I had lots of hooks and context. This was true when I was out and about in the country as well.

There was lots of basic free conversation and Sirí was constantly throwing new words and structures up on the board.

We worked with handouts rather than a textbook.

After the classes proper we had an informal one-hour conversation session with five or six of the University of Iceland’s full-time foreign students of Icelandic.

This was a great opportunity. We had about twenty minutes in pairs with one student, before moving tables to speak to another. They came armed with pictures to prompt further conversation.

There was also a certain amount of chatting (in English) about their experiences of a longer stay in the country to learn the language: the (surmountable) challenges of Icelandic grammar, maintaining motivation and building relationships with the locals. 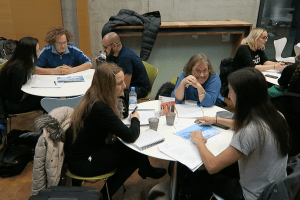 After the last session with the advanced students there was as chance to join some local language lovers other Polyglot Conference participants (who were now starting to arrive in Iceland en masse) at Café Lingua, a local monthly language learners’ meetup.

There, I got to practise Russian, German, Welsh and Basque. It was a chance to tune-up for the Polyglot Conference day-trip into the Icelandic countryside the next day (Friday) and the conference proper on Saturday and Sunday.

After Café Lingua, I popped by the student bar where some other veterans of the course had occupied a table. Bizarrely, a man was performing a version of Tom Jones’ Delilah with satirical words in Icelandic (connected, I think, with the general election which took place a few days later).

That made for a rather surreal end to the beginning of my Icelandic learning journey.

Altogether, I’d had a lovely experience, even if I’d say the course would have been better described as a “taster” rather than a “crash course”. Be that as it may, I certainly liked the flavour!

Look out for three more vlogs from the Iceland trip. One will be my annual round-up of the Polyglot Conference itself. There’ll be an Iceland edition in my “Smash and Grab” language and culture series.

For the first time I’ve also preparing a vlog in Welsh, exploring the relatively strong position of Icelandic in public life in Iceland compared with the position of Welsh in Wales.  The Icelanders can really show the Welsh how it’s done, with only half the number of speakers, fewer natural resources, a harder climate but a much more independent spirit.

The course was provided by the Árni Magnusson Institute, which offers a one-month summer school in Icelandic.