How much progress can you make learning a new langauge for thirty minutes a day for a month and how should you go about it? That’s what I’m set to explore in a new mini project: an Icelandic 30 day focus.

Why Icelandic?  The superficial answer.

The immediate spur is that this year’s Polyglot Conference is taking place in the Icelandic capital, Reykjavík, 27th to 29th October, just over a month from now.  It’ll be my first visit to Iceland.

Regular readers will know from my reviews and vlogs that I’m a fan of this annual event. You don’t have to be a polyglot to attend. It is, as they say, “for everyone who loves languages”.

It’s only a weekend but I’ll be in Iceland for a full week before.

It would be positively impolite not to have applied 🙂

I certainly wouldn’t be having a go at Icelandic now if it wasn’t for the Conference and the course. In a sense, it’s a pure accident that I’m getting a flavour of this ancient tongue.

Initial steps in a language: tourist phrases and the “core”.

In a way, then, this is just a taster for a tourist trip.

There’s nothing wrong with trying to learn a bit of langauge for that, of course.

The classic approach would be some useful tourist phrases.

So I’m using the early chapters of beginners’ courses to kit myself out.

You know the sort of thing: “my name is Gareth”, “I live in London”, “Please ensure that my luggage is conveyed direct to my suite while I have a cocktail in the bar, my man”, “How do I get to the Blue Lagoon?”.

I’m paying a lot of attention to the sound of the language, too.  We shouldn’t neglect that “boring” pronunciation and intonation section at the start of our textbooks.  We shouldn’t skimp on getting help from a teacher, tandem partner or native-speaking friends when we’re starting at a language, either.

No point knowing some basic words and phrases if nobody can understand your attempts to say them.

The other thing I can make a start at – something I could then build on longer term – is the “core” of the language.

By that I don’t mean the set functional phrases the tourist might need to function in various typical situations.

By the core I mean, rather:

I won’t be able to get near mastering all of this in the time I’m setting aside.  Icelandic, after all has a complicated verb system with irregularities and a full-on four-case, three-gender declension system for nouns, adjectives and pronouns too.

Still, focussing on tourist phrases and the core does mean that I can effectively target my preparation.

Method in the madness

For some of the basic work, I’ll make my own lists, experiment making phrases and having a tutor correct them. This sort of creative engagement is more effective than passive review to anchor my new Icelandic skill.

At the same time, this is a well-trodden path and I aim to be creative within a clear, graded framework.

It’s actually a pre-requisite for participation in the course in Iceland that we complete two basic Icelandic modules on the University of Iceland’s free, automated on-line course Icelandiconline.com.

I’ve never done this type of course before, so it’s an opportunity for me to try a new method of learning, in addition to the sort of textbook I’d normally use (on textbooks, more below).

From what I’ve seen so far, the on-line course uses many of the latest “meta learning” tuition techniques.  These include what’s known encouraging you to guess and letting your work things out yourself (“guided discovery”).

Do you experiment with different ways of being “fed” the basics of a language?

I can get set in my ways and sometimes need to make a conscious effort to try new approaches, even if I end up returning to tried and tested practices.  At heart, I’m old school, but we’ll see.

The course teachers in Reykjavik will be very experienced and I am looking forward to experiencing the methods they use in class in Iceland too.

I’ll be able to compare them with what I’ve been trained to do myself as an English and Welsh teacher.

I’ll be able to compare too with what I’ve seen elsewhere as a student, for example on the intensive course I did in Basque and the more limited one-to-one tuition I’ve had in Indonesian. 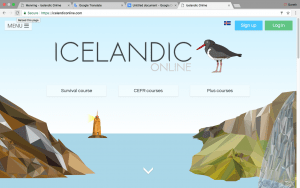 There’s a lot of advice out there about the merits of setting up mini-goals on the longer path towards a bigger vision such as learning a language.

The idea is to set up intermediate staging posts along the way.

The path is really one of time and the period should not be too long that you run out of steam or have the flexibility to put off action till “later”.

It should also not be too short that you can’t realistically hope to register any progress.

Three months is a good period.  It’s the length of the Add1Challenge, for example.

But one month (or for that matter two) can also work. It’s one favoured for establishing a new habit by Steve Pavlina, one of my favourite personal development gurus.

It’s also a length of time that works for me this year. I’ve just come back from three weeks in the Hong Kong, Singapore and China, so feel I’ve returned to a new autumn “term”.  It’s thirty days or so between now and my flight up to Reykjavík, a week before the start of the Conference.

Look out for logical staging posts in your upcoming calendar to provide some structure and pace to your learning.

As  tourists on a short visit, we need no deeper reason to learn some of our hosts’ langauge than a desire to get more out of our upcoming trip.

In contrast, we’re unlikely to keep going over the longer term without a stronger motivation to carry us through the inevitable troughs.

We need a compelling need such as a job or relationship or an ongoing serious interest.

I’m not a dabbler by nature and I tend to start most things with the intention of getting in deep (however unlikely the time-constraints of one lifetime sometimes make this).

These are the roots of my personal interest in Icelandic:

Altogether, there would be quite a lot to keep my interest fired if I want to continue with Icelandic after I arrive back at home….and that’s before I start to discover Iceland the place, its people and culture.

What about you and your language?  If you’re not just learning some language for a one-off trip, have you made a list like mine?

Your reasons don’t have to be set in stone.

You’ll probably find things change over the years as your engagement with the culture deepens and as you change as a person.

Or you may find your interest fades and you set the langauge aside….but to get up and running in the first place, you need to be sure you really want or need the language.

What I’ve done so far.

The Conference venue was announced at the end of last year’s even in Thessaloniki in November. In December I bought Colloquial Icelandic (2nd ed, 2014) and started working at a low level.  I’ve also got Teach Yourself Complete Icelandic (2004) and I’ll be using that too.

I got to the end of chapter 5 (out of 16) of the Colloquial book before things went on hold in June (in the run-up to my advanced Russian exam).

I can’t say I mastered the content of those five chapters though, so I’m starting them again now.

Between the end of December and mid June I had just ten, thirty-minute sessions with a teacher on italki.   We focussed on the pronunciation of the dialogues in Colloquial Icelandic (as I can’t really have even the most basic of conversations yet). 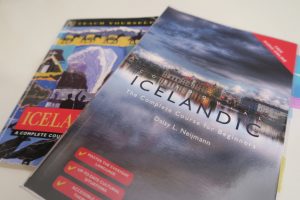 For the 30 days up to my trip to Iceland,  Icelandic will be my main language focus.  The only other active study I’ll be doing is some light maintenance of my lower intermediate Basque (though I’ll be reading, watching video and listening to the radio in my advanced level languages too).

The research shows that it’s better to do a little, often, switching between materials and activities, rather than to do massed practice.  I may miss the odd day and do more than expected on others but my underlying pattern is to be thirty minutes study/practice a day.

The tasks before me are clear:

I’ve also acquired with old Teach Yourself Icelandic by P J T Glendening for reference. It’s very old-fashioned (published 1961).  These old-fashioned grammar-based books can be good for a thorough overview of a language.  This one is also good for reference and some extra, no-nonsense exercises.

Just reading about grammar and doing exercises doesn’t mean that you’ll be able to convert the instruction into active use, of course.

For real learning you do need the trial and error deduction, guessing and tolerance of ambiguity.  These are things the best language learners often embrace.  They are things that “meta” learning  encourage, too.

To be sure, I won’t be able to get that far in the time I have available, but so what?

My efforts will certainly enrich my visit!

I’ll also be able to set firm foundations to go further later, if I want to.

As usual, I’ll be logging my progress to spur me along. Accountability can have the same effect, so I will be reporting back for those who are interested.

Have you had a go at Icelandic?

Have you thought of trying a thirty-day trial with your language of choice?

Maybe this autumn is the time for you to try something similar to take it to a new level?

Let us know all about it in the comments section below and gangi þér vel  (good luck)!

(UPDATE: Check out my end of project report and vlog from Reykjavík here) 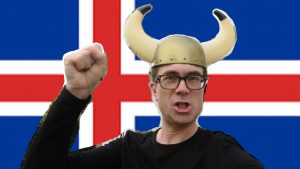 Getting Icelandic by the horns or a load of old bull?