The long flight back from Singapore at the end of my “Minimmersion” Indonesian language project in Indonesia gave me time to get stuck into editing footage from the Polyglot Conference in Thessaloniki, Greece, from where my wonderful trip kicked off thee weeks ago.

My Conference vlog is now ready (link at the bottom of this post).

This vlog is for you if you weren’t there or have never been to a “Polyglot” event and are wondering whether it’s for you (or if you’re a regular but couldn’t make it this year).   Remember, interest and enthusiasm for language learning are enough.  You don’t have to speak multiple languages.

I hope the video will also be an enjoyable reminder and memento for those of us who did attend.

My focus is on the “buzz” outside the lecture rooms.  The talks themselves were professionally filmed and will appear on the Conference’s YouTube channel.

I have tried to include as many voices as possible and thanks to all who shared their thoughts with me (if you spoke to me and don’t feature, it’s probably because of the background noise: the built-in mic in my camera didn’t cope too well with the acoustics inside the venue or with the strong sea breeze outside). 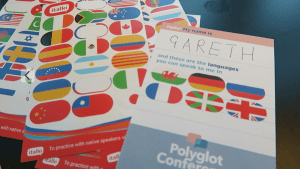 Flagging an interest. Getting my badge ready at the beginning of the Conference

Several people told me they were underwhelmed by the city.  Such as I saw of it seemed interesting and attractive to me, though.

I’d like to have had more time, as I never got to see some of the sights (such as the fortress above the city and the Roman forum).  I passed the famous sea-front White Tower several times, but didn’t fit in going up it for the view.

I will remember the very long sea-front promenade, the Arch of Galerius, the Agia Sophia and the Rotunda, a building which is 1600 years old and still in use. It began life as a Roman temple, before becoming a Mosque (the minaret still stands) and an Orthodox church. 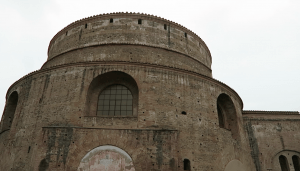 What goes around, comes around. The 1600 year-old Rotunda

Also memorable was the military parade which went along the sea front on the eve of the Conference, on the Greek “Anniversary of the ‘No'” or “Ohi Day”.

“Ohi Day” is the annual commemoration of Greek primer Ioannis Metaxas’ rejection of Mussolini’s demand on  28 October 1940 for Greece to allow the Axis powers to occupy strategic locations in Greece.  The Greek rejection brought the country into the Second World War.  I had a good view of the parade from the balcony of my AirBnB apartment. 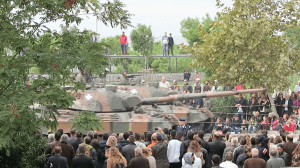 Arriving in Greece was a bit of a linguistic shock. I was totally unprepared and, not to put too fine a point on it, everything’s, ….erm, in Greek.

Even buying a pot of what we in England call “Greek-style” yoghurt was a minor challenge.

It would have helped if I’d learned the alphabet in advance. My knowledge of Russian did provide some orientation, given that the Cyrillic script is based on the Greek, though there are letters not known in Russian and some with different values.

An alphabet can be learned in an afternoon, though.  I’m working on a second, light-hearted video on which will help you along (and thanks to all the Conference-goers who gave me a hand with that).  Watch this space!

Besides the alphabet, there were other things which reminded me of Russia.

Russians are a target tourist and investment group and that explains why Russian was one of the language on signs aimed at tourists, for example at the Rotunda. I also noticed a Russian cultural centre and several language schools giving most prominence in their adverts and signage not just to English, but also to Russian lessons.

Orthodoxy is an all-pervading trait too and, as in Russia, there were icons to be seen behind shop counters or on taxi-drivers’ dashboards.

Like the Russians, the Greeks still seem to be big smokers and – bet this is the first time you’ve come across this piece of trivia – they also seem fond, like the Russians, of festooning their chocolate bars with medals from long-forgotten competitions in Paris in the Belle Époque. 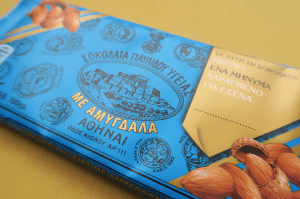 Chocolate worthy of the name (with the medals to prove it)

The Conference venue and organisation

This was the fourth Conference and the fourth location.  I think the venue was the most impressive one so far (I wasn’t at the first Conference in Budapest in 2013 but I am a veteran of Novi Sad 2014 and New York last year).

The Thessaloniki Concert Hall (Μέγαρο Μουσικής Θεσσαλονίκης) is a purpose-built complex in a stunning location on the sea front.

The pre-conference reception (marred only by too-loud music) was held on a mezzanine level from which we could see the spectacular sun set over the western sea.

The main auditorium and smaller lecture rooms were large and there was a splendid front hall (again looking out over the sea) where we had lunch and congregated and where the sponsors had their stalls.

There was also a coffee bar serving excellent espresso on the top floor. 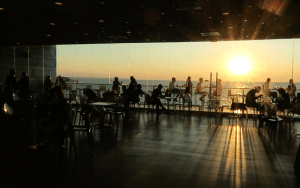 Gold Blend. Sunset at the coffee shop/bar on the top floor of the venue

The venue was well staffed and the Conference had a team of volunteers, resplendent in red tee-shirts. The helpers were mainly (I think) language students from the local universities (Thessaloniki is a big university city).

There were also “keynote” sessions for the first time this year. I liked the idea that everyone came together in the main lecture theatre for the sessions immediately before and after lunch. It meant that there was a shared thread for all and avoided clashes for at least part of the packed, two-day timetable. 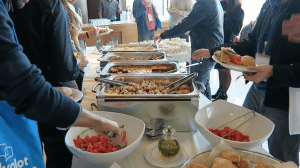 Feeding our enthusiasm. The catering was excellent this year

In addition to talks on methods and technique in language learning, more general talks about languages and language learning, the organisers Richard Simcott and Alex Rawlings try to ensure that some of the talks reflect the linguistic history and geography of the host state. Sponsors Mango Languages put on a Greek lesson and there was also a talk learning Greek using the Michel Thomas Method.

For me, three oppositions emerged as themes:

1) The balance between fun and discipline in language learning.

Discipline came to the fore in Alexander Arguelles‘ inspiring talk about how he became a polyglot and was also central to Helen Abadzi’s approach to language learning. Lýdia Machová put more emphasis on the fun side, though for her, discipline still has its place.

Johanna Wagman and Bertrand Millet talked in French about “La gamification, où l’art de fiare du jeu un outil central de votre apprentissage des langues”. I’ll have to catch up with that one on YouTube when it appears as I was in Luca Lampariello’s talk on translation as a tool to learn languages, which was more in the discipline camp.

2) The trade offs between youth and age.

The old issue of whether there a “critical period” in language learning which was the subject of a talk by Tim Keeley (“The Age Factor”) and came up in Helen Abadzi’s talk on “How to learn languages effectively”).

3) Language, love and hatred (or at least fear and tension).

In her informative presentation, Emily Canning looked at linguistic and ethnic tensions in Central Asia, especially between the Kyrgyz majority and Uzbek minority in Kyrgyzstan.

An issue which remained in the background throughout the weekend was tensions over language, names and identity in “Macedonia”. When this came up in questions and answers after one talk, the speaker said that Greece, like France, is one of Europe’s “linguistic rogue states”.

On the love side, reviving “tiny languages” was the subject of Alan King’s talk. Ghil’ad Zuckermann was equally impassioned on reviving the “sleeping” (rather than “dead”) languages of Australia.

Love or not, language is a central component of identity.  It can be an emotive issue.

An annual social event too….and what about next year’s venue?

Besides the talks, the Conference is big social event for like-minded people to share their enthusiasm.

It was great to see familiar faces from previous Conferences and from the Polyglot Gathering and to meet new people (of whom there were quite a few). 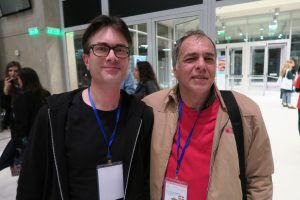 A get-together like this is also about practising your languages. I spoke quite a lot of Welsh and French, less Russian and German this year. Besides the renowned Alan King, author of two of my Basque textbooks (who also turns out to speak fluent Welsh), it was great to discover that one of the student helpers had learned some Basque and to meet Maria, another attendee from Greece who had learned great Basque in record time.

The “grand finale” was the announcement of the venue for next year’s event: it’s Reykjavik, the capital of Iceland.  I was pleased to hear this as I’ve long wanted to go there (though not necessarily in October).

Various conference-goers immediately professed their intention to start learning Icelandic. I’m not sure if I’m quite up for that one but if you fancy having a go, a dedicated Facebook group has duly been set up.

I did watched my first Icelandic film on the plane back from Singapore this week, though; just to start to get myself in the mood.