Kaixo denei Londresetik! I’ve just had some exciting news: I’m going to be in a Basque TV programme. The crew is coming to shoot at the end of August. That’s great motivation for me as an intermediate level Basque learner to put my foot on the gas during the next four weeks. In this post I’m launching my “One month Basque Boost” mini project (scroll right down for launch video). It’s also time for a quick update on what I’ve been doing since I last posted about my Basque learning. Whatever your target language, this should encourage you if you’ve been struggling with a new language and – like me – you think you should have moved faster and further by now.

The time is right

The timing of this TV project is perfect as I’ll have more time and energy than usual to focus on Basque this month. That’s because last night I “broke up” to start my annual one-month sabbatical from the law firm.

Out of the blue a couple of weeks ago, I got a Facebook message from one of the television production team. I’m still not sure how they came across me (no evidence that they were Howtogetfluenters… Maybe the London Basque Society tipped them off).

There was a form to fill in with some background info about my and my interest. I delayed doing this as I “couldn’t face” having to write in Basque. I finally got it sent in and had a preliminary Skype call on Wednesday morning. They had tried to phone me, but I thought Skype would be better than trying to understand a phone call. I was worried that my level would not be good enough and that I wouldn’t be able to understand them.

The call went really well, though. I only had to ask Meritxell to repeat herself a couple of times. We discussed filming ideas and locations and fixed the date. 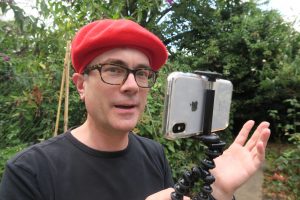 Me and Basque: the background

If you’re a regular reader, you’ll know that I’ve been learning Basque for five years now.  The language – spoken in the Basque Country on both sides of the western Pyrenees and along the adjacent coastlines in the French and Spanish states – is quite a challenge. That’s because it’s a “language isolate”, unrelated to any other language.  It’s different, exotic.

I’ve generally been learning at a stately pace.  It’s been low intensity, working with self-study materials.  If you’re a Basque learner, check out my Basque text-book review.

Until last year, I was attending a weekly group class at the London Basque Society.

Throughout, though, the mainstay of my learning has been study on my own and working with teachers via Skype. That’s my language learning philosophy: self-study and one to one, with group classes as an add-on. Useful at times but not central.

There have been breaks for business travel and vacations. I’ve also put the Basque to one side or into “maintenance mode” when I’ve been focussed other language projects (such as my advanced German and Russian exam preparation and my beginner Indonesian and Icelandic projects).

These breaks aside, the Skype lessons have constant in my life over the past few years.  I aim for two or three a week.  It’s an ongoing language habit that I don’t think about that much.

I’ve also deliberately ramped up several times in the past. I used the framework of the 90-day Add1Challenge three times (check out reports here, here and here).

I attend London Basque Society events when I can. 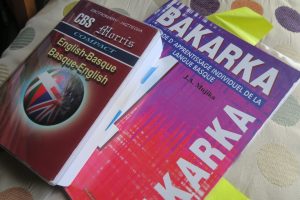 Here, hot off my calculator, are the latest totals from language learning log:

How is the work paying off?

It’s difficult to get an objective handle on your own progress, which is why recording yourself at intervals is a useful tool for seeing whether you’re making progress.

I’ve just been looking back at some of the videos I’ve posted in the past.

My best “performance” so far has been this one from a couple of weeks after my return from Maizpide (September 2016):

I can now have proper conversations. I’m forgetting the most frequent words much less often. I’m still coming up against my limited vocab but I’m finding it easier to remember new words when I do focus on doing that.

I’m developing a feel for Basques unique verb system. It’s different and quite complex, though it is very regular.

The auxiliaries and the small number of (high frequency) synthetic verbs still cause me problems at times.  At other times, though, I’m able to apply the system “on the wing” to get the right form with a verb I haven’t used so much.

That said, when I look at the video I recorded earlier today (below), I still feel a bit embarrassed at my level and feel I should be at a higher level now…..And that’s just when I watch my performance in the intro in English 😉 No, seriously, I’m still making a lot of mistakes but, as I said, I’m feeling the progress all the same.

My aim is to be able to do a thirty or forty-five minute conversation session with a teacher five days a week.

I also aim to do at least one additional thirty-minute session five days a week.

I’ll continue to work with the Habe materials with Unai and Bakarka 4 with Eider. With the other teachers I plan to use other chapters of the same courses. I’ll also review things I’ve done already.

This week I started to look a new text-book as well, the Arian B2.1 book.  It’s above my current level but well make for a change and a stretch.

I’ve worked Assimil Le Basque unifié (initiation)  to death, but I may review some of that.

l’ll be dipping in and out of Colloquial Basque too because it’s packed with very useful vocab, phrases and cultural background and using Alan King’s The Basque Language again.

Aside from the constant need to practice the alien structures of the language, my main challenge is vocab building.

I will also be listening to Basque radio when I’m eating, showering and doing household chores. This passive exposure is something I’ve been doing from the start and I understand more and more (though still less than half, I’d say). This year, I’ve also started watching the news online.

I’ll be posting a short study log with a short progress video each week…..starting with this post and vid. The vlogs will generally be quick updates to camera about my Basque learning and general life that week.  At the end, I also hope to enlist some help to record a proper conversation as well.

I think the programme’s due to go out in September. I’ll let you know.

If you’re a Basque learner, do let me know about your experiences in the comments below.  Likewise if you are studying another language and can relate, or just have questions, it’d be great to hear from you.