Kaixo Londresetik! This is my second post in my “One month Basque boost” mini project. I’ve been asked to take part in a Basque television programme at the end of August. That provides a great incentive for me to focus in again on levelling up my Basque speaking abilities. My aim this month is to do five one-to-one Skype lessons a week (I’m mainly using italki.com) plus thirty minutes focussed study, five days a week. I’m recording a short video in Basque each Sunday. You can find the second one at the bottom of this post. The post itself is in the form of my daily notes on what I’ve been doing.

Worked on one of the listening exercises from my “Habe” materials, unit 30: two jokes about priests. Followed my regular study routine. Began with careful listening to the audio without looking at the text and started interacting with it from there.

Then started preparing “Habe” unit 31, which is all about gossip and scandal in the press. Did the first reading exercise and listened once through to the first listening exercise.

Mailed Uñai, a new teacher I’ve found on the web, to find out about his availability for the coming week. He isn’t sure yet and won’t be able to tell me till Tuesday or Wednesday. So, I’ll be starting the week unsure whether I’m going to be able to book the teacher hours I’d like.

Ran in the park and listened to live Basque radio for half an hour on the headphones. Conversation about the murder of Tsar Nicholas II and his family in Ekaterinburg. I’m a specialist in late-tsarist Russia, so the subject is right up my street. The journalist had visited the site and was explaining. Understood quite a lot.

No teacher lined up for today. Neither current teacher available and I’m still waiting for my new ones to get back in touch. My fault for not having got back to one of them by email earlier last week.

Good news: my regular italki teacher Eider (the only Basque teacher currently on there) has confirmed my 30 minute sessions with her for the next three Sundays. She only offers Sundays at the moment. She’s not around for the final Sunday of my Basque month, though.

For 45 minutes worked by myself on second of the two audio files from Habe unit 30. It’s the story of Mateo Txistu (Whistling Mathew). He’s priest who also likes hunting. While he was officiating at Mass, his dog was tied up outside the church. A hare ran by. The dog started barking loudly. Mateo abandoned the Mass midway through and he and the dog pursued the hare all day and all night, on and on and on, without success. God was so angry that Matteo had abandoned the Mass. Even today, during long winter nights when the wind is blowing, when the old people hear the wind blowing they say it’s Mateo Txistu running after the hare. Loads of old folk stories like this in Basque.

Again I used my usual routine, beginning with the audio and trying to understand as much as I could before reading the transcript and pulling it apart in an interactive way. 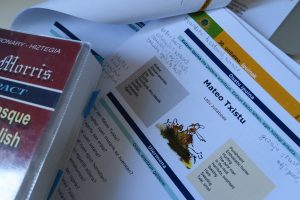 The story of Mateo Txistu

Started “Habe” unit 34: “Iragarkiak” (“Announcements”). This is the unit I’ve sent to Iñego, so I’m preparing the ground for the lesson. Listened to one of the audio exercises right through and then tried to reproduce sentence by sentence and took it from there.

8.30 am – just come off the first lesson with Iñego. He’s a very communicative, friendly personality and a clear voice. I didn’t understand everything he said but could guess (or pretend) when not. I think it’s just more important sometimes to keep the conversation going.

We agreed to do two half-hour sessions a week, and he’s happy to use my “Habe” materials. This time, though, just a getting to know you chat session.

One interesting thing I learned was that there is a difference between jolastu or jostatu, on the one hand and jokatu, on the other. They all mean “to play” but jolastu/jostatu means to play and instrument or about actors performing or children having fun. Jokatu means to play in a competitive way (for example at cards or in sport).

We also discussed knowledge of English in the Basque Country. Iñego said it was generally low in the Spanish Basque provinces, but higher than elsewhere in the Spanish State or in the North (French Basque Country). We put this down to the positive effects on linguistic ability of “elebitasun” (bilingualism – another new word). Iñego explained that in some schools Maths or Geography are now even taught through English.

Got in half an hour in before my lesson with Uñai. I was working on “Habe” ch. 31 listening exercise “Norentzat?” (“Who is it for”), practising the -entzat case ending. I took down the text as a dictation.

My lesson with Uñai started on schedule at 10am but ended abruptly at ten minutes later when Uñai’s computer cut out.

The problem? He arrived in the Netherlands yesterday and the airline has lost his baggage. The cord for his computer was in the missing case. Lesson abandoned. I hope he gets the case back!

Did another half hour on my own. Translated the text of “Norentzat” into English to translate back at a later date. Revised the Matteo Tsixtu exercise listening exercises from unit 30 by listening again and then “shadowing” the text a couple of times.

My mood slumped when I checked my mails and found that Iñego has cancelled the second lesson we had agreed for tomorrow. Immediately jumped to the conclusion he’s maybe going to be unreliable.  With Uñai out of action due to the lost luggage, that means I could end up only having two full lessons this week (I’m booked with Eider on Sunday) and I was aiming for five! 🙁 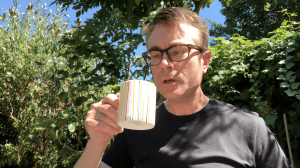 Loretegian – out in the garden filming the vlog

7.30am – glorious sunny start as the heatwave continues. Did second listening exercise from “Habe” unit 31 by way of a first listen through to the whole text and then a phrase-by-phrase written dictation exercise.

I noticed the chunk “filma grabatu” (to record a film). I’d been saying this to my teacher without being sure whether this was the verb used for making a film or video.

Less active work on my materials today. Started with “shadowing” exercise on the audio of the “Bihotzaa dir-dir” text from “Habe” unit 31. Then going through the rest of the text and exercises in this unit to check I understand. Looking up vocab. All in preparation for working through with Uñai on Skype.

Just going out the door with my phone headphones on when the stream of Basque radio was interrupted in my ear by a Skype call. It was Iñego asking if I was up for a lesson right away. Another ten minutes and I’d have been in the middle of the run.

So, about turn on the doorstep and I had a good second lesson with Iñego, the first using the Habe materials. We worked on unit 34 together for the first time.

Mid-afternoon got an email from Uñai saying that his suitcase with the computer cord had been located so he’s up and running again. Three sessions with him booked for next week. Looks like the “teacher crisis” which looked to be brewing on Wednesday has now passed 🙂 .

One hour or so of passive radio today, including on my twenty-five minute run. Yes, that finally happened after the unexpected Basque lesson.

Morning kicked off with a thirty 30 minute lesson with Iñego.

General chat first. Topics included Basque “baserriak” (traditional farm houses) and how often the names of them are also Basque surnames. Also discussed how the typical “Basque” typeface is more used in the North (French Basque Country) than in the South. Is it kitsch nationalism for the tourists in place of a political identity and strong language revival of the South. Or is it one way of proudly showing identity when faced with the crass arrogance of the trumped up little Napoleons of right and left up in Paris? Perhaps both.

Then back to unit 34 to practise telling the time. Iñego good on forcing me to be really accurate with my endings. I’m now at a level where it makes sense to tune up my case endings with numbers when telling the time. It’s the ablative (“-tik”) ending on the number for “from” (e.g. from 9 o’clock), then allative (“-ra”) for to (as in “to 10 o’clock). The endings need to be plural for 2 o’clock onwards, though as the Basque time expressions use “one hour” but “two, three hours” etc.

Later today I spent another half hour reading a text for the first time to work on with Eider next Sunday. 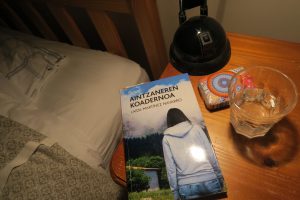 Unable to drop to sleep between midnight and quarter to five this morning, partly because of the heat. Ended up propped up in bed at about 4.20 am reading the first seven pages of a Basque novela “Ainzaneren koadernoa” (Ainzane’s notebook) that I first “read” a few months ago. (Well my eyes went over the words then, but I didn’t get much of the meaning.)

I was amazed how much more I understood last night. I was really following the story, despite not knowing all the words or being sure of all the structures. Very encouraging. It’s hugely exciting when you sense a gear-shift like that.  Or was I dreaming?

Not up until after eight and no time to run, especially as I had to deal with a problem in the kitchen this morning when the kettle tripped the electricity circuit a couple of times. Need a new kettle! Number three in eight years in this house. All in all, no time for some passive radio either before my thirty-minute session with Eider.

My reading fluency in the middle of the night did not translate into a particularly fluent Skype performance from me. Still, some useful work with Eider from Bakaraka 4, chapter 3. We focussed on the exercises practising conjugations of past tense of esan (to say, to tell), which is completely new to me. You can also usually also express this with using an auxiliary verb with esan unconjugated.

Shortly after the lesson, I returned to my desk for another thirty minutes’ work reading through one of the longer texts in chapter 3 ready to work on together in next Sunday’s lesson.  Then, out to the garden to film the video update.

I aimed for five lessons and five days with at last thirty-minute self-study sessions (total two-and-a-half hours in total). Totting up (starting with Monday and including today) I only did four lessons but I did at least thirty minutes self-study all seven days (total self-study: six and three quarter hours).

And in other news…. I’ve kicked off a new “Dr Popkins Method” vlog series (check out the YouTube channel). I’m also putting together a new language learners’ mentoring programme for the autumn. On those, watch this space.

Next Basque update: next Sunday.  First, this week’s vid:

As always, any comments or questions now the first week is done, let me know below.

Enough about my efforts! How has the first week of August gone in  your language learning? Tell me all about it!

Other posts  in this series: