This is the third post in my “One month Basque boost” mini project. My aim this month is to do five one-to-one Skype lessons a week (I’m mainly using italki.com) and an additional thirty minutes focussed study five days a week. The immediate spur is an upcoming Basque TV appearance. At the bottom of this week’s diary, there’s a quick update of other news from Howtogetfluent.com and you can click and watch this week’s “proof” video of me stuttering away in Basque.

This is the start of the second week of my month’s sabbatical from my day job at the law firm and I’m determined to keep up the momentum with me Basque….among other projects.

The London heatwave continues, for now. This means I had to be early with my morning run. Went out today at half past seven. Half and hour jogging round the park with Basque radio playing through the headphones.

Back with five or six minutes to spare before my 45 minute lesson over the net with Iñigo. I generally use italki.com for language teachers and tandem partners (that link will give you – and me – USD10 credit when you complete your first ever lesson with them).

The lesson went well, once we got connected. My Mac doesn’t like Skype. The materials were unit 34 of my “Habe” course. We were working more on revising telling the time and then on an exercise on “Oharrak” (warnings), which involved matching up those daft packaging warnings you sometimes get with the relevant household objects (sleeping pills (“can cause drowsiness”), an iron (“beware – can get hot”) and so on).

2pm twenty-minute call with Meritxell from Basque TV, all in Basque. We discussed more about the upcoming programme. Lasted 20 mins. We’d already earmarked the last Monday of August. Filming with me will be during the afternoon. Discussed three locations, timing, which order to film.

I learned more about the programme. They are also filming at a Basque restaurant in London and other interviewees are Basque singer who lives here and an American who has learned the language (a guy I’ve met a couple of times through the London Basque Society). They will be also filming one of those Catalan human towers (a “castell”). That’s because there’s a group who do castells her that’s run by Basques.

Evening: thirty minutes self-study. Reviewing some of what I did with Iñigo from unit 34. Then went ahead in the unit to prepare some of the vocab. Listened to the first audio clip to this unit: “Mercedes Vio Berria” radio ad twice through. Then tried to write down what I could hear. Then corrected against the transcript. 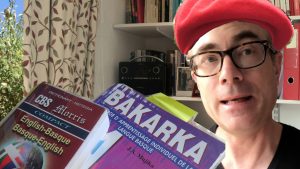 Got an early start at 6.30 am. Spent an hour working with the “Habe” materials. Did vocab prep work on “Azkarrak direla publiziastak” (Ad men are crafty) text in unit 34. Then moved to unit 33 (which I will be working on with Uñai before too long (I’m currently doing unit 31 with him).

Unit 33 is about migration and immigrants. Lots of topical and relevant social and political vocabulary. I worked through several of the reading texts, looking up vocab.

45 minute afternoon session on Skype with Uñai. First half spent in general catch-up conversation. More than enough to talk about: he has now been reunited with his missing suitcase but has problems with his new flat, I was explaining more about my upcoming participation in the television programme.

I’ve decided to go to the Welsh National Eisteddfod, so tomorrow I’ll be travelling to Cardiff, the capital city of Wales.

The Eisteddfod is the main Welsh-language cultural festival. It takes place entirely through the medium of Welsh. It’s always the first week in August. It’s held in a different part of Wales every year, alternating between the northern and the southern parts of the country.

I told Uñai a bit about that too during the lesson.

We then did some more of the unit 34 written exercises but verbally, on the hoof.

Tomorrow’s lesson brought forward to an earlier time as I’ll be on the train in the afternoon, Wales bound. 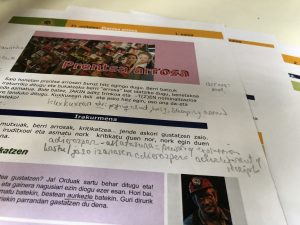 Another early start, including a run in the park listening to Basque radio before lesson with Iñigo.

Temperature in the low twenties this morning. Looks like the heatwave may be over, for now.

Good general discussion first about different types of cuisine and different attitudes to eating animals (which, and which parts). Conversation then turned to the fishing industry and I was trying to explain attitude around that in the UK in the context of Brexit. That proved a bit of a stretch at my current level.

We then continued with “Habe” unit 34. There was a complete the gaps exercise about a Basque TV advert featuring a young man receiving a traditional Basque txapela for his 18th birthday and wearing it the wrong way round like a rapper. Then there was a reframe the sentences as reported speech exercise.

Just time for breakfast then straight on at 9.30 with the day’s lesson with Uñai (originally scheduled for this afternoon).

We started “Habe” unit 31 which is about the “red press” (prentsa arrosa), that’s to say media celebrity and gossip magazines. Practising the “norentzat” case (who for) with some useful exercises. Then read three short pieces about celebrities. I discovered that Elton John where red-tinted specs because of a medical problem with his eyes. It’s not just fashion.

Early afternoon I headed to the station to catch a train to Cardiff.

Although there have been periods when I’ve attended the Eisteddfod year after year, the last time I was there was in 2014.

One problem often is getting to the “Maes” literally “the Field” the main location of the Eisteddfod. This year, though “y Maes” is in the “Cardiff Bay” area of central Cardiff: Rohl Dahl Place, the Wales Millennium Centre (concert hall) and the Senedd, the home of Wales’ National Assembly (parliament).

Tonight, back in the AirBnB after my first Eisteddfod evening, I decided to postpone the lessons I had booked with Iñigo tomorrow and Uñai early tomorrow and Friday morning. So there will be a pause in my Basque focus until Sunday. 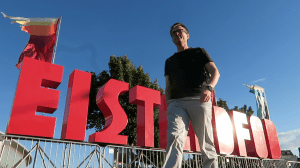 Outside the Eisteddfod “Maes”

I’ve been looking at the various stalls there (book and craft stalls, stalls held by charities, educational institutions, various official and corporate bodies, voluntary organisations). Then I was in famous, brick Pierhead building, where all the activities for learners were focussed.

I also attended more formal events in “y Pafiliwn”, the Pavilion. The Pavilion usually a (very) large tent but, this year, the main concert hall in the Wales Millennium Centre. I was glad to catch the presentation of the prize to Mat Spry, winner of the Welsh Learner of the Year competition. I also saw some “Cerdd Dant” (Welsh poetry set to harp music).

Another highlight today was the triumphal reception for Geraint Thomas, the Cardiff boy who’s just won the Tour de France. I was just in the right place at the right time (inside the Senedd) to see the First Minister of Wales and the Speaker of the National Assembly lead him out to the steps to meet the crowd.

I was shooting footage all day and there’ll be a couple of “Eisteddfod” vlogs up on the YouTube channel before too long. 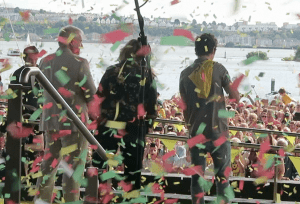 Again I spent the whole day at the Eisteddfod.  Once the heavy morning rain had cleared.

I attended a couple of interesting meetings. One was on the Welsh legal system (I’m a lawyer by day). The other, hosted by the language pressure group Dyfodol was about the government’s policy of creating one million new Welsh speakers by 2050. The special guest was Eluned Morgan, the Minister for the Welsh language.

The concert hall was packed for the main ceremony of the day, the announcement of who had won the “Chair”. With That’s the competition for the best cynghanedd (Welsh strict metre poem) on a set theme with a length limit. Poets have to submit work under a pen name “chairing” of the bard”. So, unable to get a ticket, I had to watch the ceremony on a TV screen.

Had breakfast at a cafe in the imposing Art Deco hall of Cardiff Station before getting on the train for London.

I admit I could have used this for reading Basque.

Instead, I was editing some of the video for the first of the (likely) two eisteddfod vlogs.

Back in Brixton, I’ve been re-jigging my lessons over the weekend. Iñigo was originally available this afternoon, but we are now having a lesson tomorrow. That’s in place of the one I should have had with Eider, who has to go to her café job but will rescheduled (not yet sure when).

I should have done at least thirty minutes Basque tonight. Instead, I did more work on the Eisteddfod vlogs. Addictive, this video production business.

First thing: half an hour’s prep of “Habe” materials. Then: a run in the park listening to Basque radio on the headphones.

Next: a lesson with Iñigo. We never got to the “Habe” materials as we were just chatting all the time.

I told him what I’d been doing in Cardiff and he was telling me about his upcoming interview for a seven month internship in London. Who knows, we may well get to meet in the autumn.

Early afternoon, I recorded this week’s video (see below).

This week I’ve been busy working behind the scenes on the site (I’m developing some courses for language learners – more details soon).

I was also productive over on YouTube.  This week’s Quick Tip Tuesday vlog was called “Conversations first”. I shot it in Hoxton, currently one of the hipster captials of London.

I also shot the second and third in my “Dr Popkins Method?” video series. Number Two I published on Thursday. It’s my own story of how I got fluent in French and Welsh. Next week, I’ll publish the next episode: how I learned German and Russian.

What about you? As we hit the more-or-less half way mark in August, is your language learning going as you’d planned it? If not, how come? If so, what’s your secret? Share with us all in the comments below!