Kaixo denei!  It’s the end of week three of my summer “One month Basque boost”  project.  One week to go until I’m in a Basque TV programme. My aim this month has been to have at least five thirty or forty-five minute lessons with a teacher on Skype each week and to do thirty minutes of self-study a day. This week I managed to have eight lessons and did the extra study five days out of seven. On Monday I flagged, on Tuesday I let the self-study go because I had a second Skype lesson. Here’s the diary. At the end, there’s a catch-up video in English, then Basque, plus a general update on what I’m up to here at Howtogetfluent Towers.

The week kicked off with 45 minutes on Skype with Uñai. We did the last exercise in unit 30 of my “Habe” course (which we had missed out last week by mistake). We then resumed with unit 31 and redid one of the benefactive (“norentzat”) case exercises we’d already worked through together last week.

This was all after thirty minutes general discussion. In that, we covered Uñai’s on-going accommodation problems in The Hague. I also gave him a round-up about my time at the Welsh National Eisteddfod, the annual Welsh cultural and social festival that I attended at on Thursday and Friday last week. What I said was very similar to what I told Iñigo in my most recent lesson with him. Good to practise the vocab again!

No further study today….Naughty, I know. I was prioritising working on the site and working my upcoming language learning methods course….. 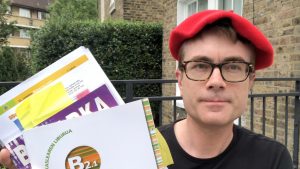 Started with a 45 minute lesson with Iñigo, the first fifteen minutes of which were, however, lost to Skype problems.

We switched to Google Hangouts which we’ll use going forward. Sound and image quality not quite as good but at least we could both see and hear each other.

Continued to work on “Habe” unit 34. The topic is “advertising”. The grammatical focus is on the still on the “norentzat” case.

Breakfast, shower, then ten mins prep before a thirty minute lesson with Eider (she had postponed from Sunday, making today a two-lesson day). Once again, I explained all about the Eisteddfod and showed off my footage of Geraint Thomas. This was low tech sharing, that’s to say, me holding my vlogging camera screen up to the Skype camera.

We then got on with Bakarka 4 chapter 3, working further on the past tense short forms of esan (to say, tell) and doing the text “Egin kopiak bada ezpada ere”.

The texts in this book – like in Assimil courses- tend to have an amusing turn at the end.

This time it was about an office worker’s boss telling him to throw out all the old letter and bills as they were getting drowned in paper. The following day the worker reported the work done and added that he’d also photocopied each paper he threw out, for the archives. I did “get” the joke this time, though sometimes it takes several reads through.

No more Basque study today. I was flat-out working on the site and then for quite a few hours into the night finishing the Tuesday vlog, the first of two from the Eisteddfod. It was a question of priorities and Basque was only in second place.

Woke at about 6.30 after only about four and a half hours’ sleep after publishing the Welsh vlog at about one o’clock in the morning. Felt exhausted and unrested… Did my usual trick of rolling around in bed for an hour or more trying to get back to sleep, then gave up and made a cup of tea and returned to the sheets and listened to a bit of Basque radio.

At 8.30 it was my lesson with Uñai. A prime example of how pre-booking lessons helps keep you on track. I certainly didn’t feel in the mood for a lesson but, by the end, though still tired, it feels like it was very productive.

We worked further on “Habe” unit 34. More “norentzat” case exercises, reading short texts about celebrities, then translating some short conditional sentences into English. Next, exercises putting the correctly conjugated form of “jakin” (to know – facts, not people). I gave the verbs in the past was well as the present, as I’ve been practising the past forms with Eider in Bakarka 4.

Now for a run before breakfast. I put it off yesterday because if my too late start then. Unsurprisingly, it then never happened.

Half an hour’s self-study in the evening. Finished working checking I know all the vocab in the last sections of “Habe” unit 31 that I may well finish with Uñai tomorrow.

Listened through to the first audio recording to unit 32 and then took it down as a line-by-line dictation. 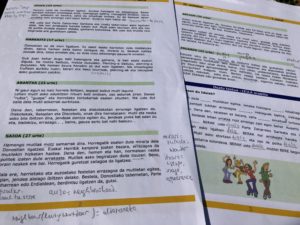 A “wall of text”, Habe style

7.15-7.45: Thirty minutes focussed pre-prep on “Habe” unit 32 – reading the texts and pulling out the vocab. The topic of this chapter is “work and vocation” – always a good topic to stimulate thought and conversation, so I look forward to going through the discussion exercises with Uñai.

8.15-9.00: Just come off quite a good lesson with Uñai. We got straight started with exercises – little general catching-up chat at the beginning, given that we “met” yesterday.

We finished “Habe” unit 31 with more sentence translation (from English into Basque) and the final gap-filling exercises from the unit on “norentzat”. Then an exercise filling in the gaps with conjugated forms of “jakin” in the present.

We then got straight into unit 32, so I was glad I’d done some prep on it. The grammatical focus in this unit is reported speech. In Basque reported verbs take a special ending – “la” (with stem changes sometimes). It’s very simple in theory but quite different from anything I’ve come across in an other languages so far.

I should add that all the work I’m doing in the Habe units is revision. I covered these units about a year or more ago in the physical Basque classes I used to attend.

Just come straight off my 45 minute lesson with Iñigo. Ten minutes in, Skype disconnected and I switched from the Mac to the iPhone. He was also giving the lesson by phone. I’m really a laptop guy (never use my tablet) but no problem doing the lesson by iPhone.

To most of you it will be no revelation that you can have a language lesson on your phone, but it reminds ME how portable and flexible the location of an online lesson can be these days.

We finished “Habe” unit 34 with some final “complete the gaps” exercises and moved on to unit 35. It’s title is “Love, where?” and we began working through a “wall of text” – short explanations by young people from Donostia (San Sebastián) about how they meet (or fail to meet) potential partners. I read out three of the six texts and understood the thrust of each, though there was some new vocab. I hadn’t prepared the text in advance and will try to review – and prepare the rest – before tomorrow’s lesson.

I’m afraid I didn’t fee particularly fluent today. It’s very much up and down from lesson to lesson with how the language flows. I just hope I feel “the flow” when I’m with the television crew taking part in the Basque TV programme a week on Monday.

Finished my day this evening with thirty minutes preparing the next pages of unit 34 for tomorrow’s class with Iñigo.

Day kicked off with a 45 minute lesson with Iñigo.

Well, I’d set aside thirty minutes for study before hand but that was lost to me trying to work out how to install Skype and access my existing account on my iPad (which I don’t use very often). Finally sorted that out and it worked very well with Iñigo’s account (which my Mac for some reason doesn’t).

Like yesterday, I felt pretty useless during the lesson. We were working on the subject of dating, with a certain amount of slang or idiomatic vocab. The preparation I did yesterday evening stopped things feeling even worse, I guess.

The grammar is reported speech: indirect statements and questions which are simple but very different in Basque and the forms take a bit of practice.

Finished the evening with 30 mins prep of Bakarka 4 ch. 3 for the lesson with Eider tomorrow (going through two quite long reading texts and checking the vocab). 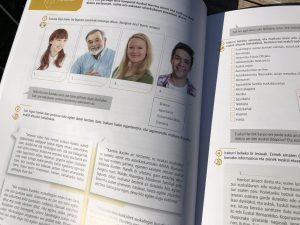 Arian B2.1 – Basque students talk about how they learn

Kicked off with a 30 minute run in the park, with Basque radio playing in my ears. An interview with a guy making maps of Iruñea (Pamplona) after the news bulletin.

Just come off a 30 minute Skype call with Eider. She’s got the market cornered for Basque on italki.com at the moment. I use this platform to arrange most of my language teaching and exchanges. When you complete your first ever lesson using this link you’ll get USD10 in credit (and so will I) :).

For the first fifteen minutes we were chatting. I was trying to explain that I called the police yesterday as some neighbours (actually a block away) were playing loud reggae music for several hours. Some of the music was actually quite good and I Shazam-ed it, but that’s not the point. It annoys me when people are inconsiderate of others. The older I get, the less inclined I am to put up with it.

I found this quite difficult because I didn’t understand all the sentences (despite have supposedly “prepared” them yesteday).

In the last couple of minutes I read the text “Egin Kopiak Bada Ezpada Ere” outloud. We had worked on last week. This time noticed several examples of the adjectivisers we’d just been practising.

Did the lesson standing up, like yesterday with Iñigo. I spend far too much time at my desk. For a few months now I’ve had a small frame that raises up my laptop but can also be used to convert the table into a standing desk. I find standing helps me focus and keeps me feeling more energised.

For my thirty minutes self-study today, I worked from chapter one of the Arian B2.1 book. It’s a bit above my level but it’s got short audio pieces with transcripts. That’s great for dictation, which I find a great way to force me to focus and “notice” the differences between what I think I hear and the written language and language I simply don’t know well enough yet.

Call coming up with Meritxell from Basque TV tomorrow morning to discuss the filming again.

I’m with the crew a week tomorrow (Monday 27 August). For that reason, think I’m going to hold off publishing the diary and video next Sunday and wait till the first Sunday in September. That way I can roll in a report on how the filming went.

So, look out for a post on a more general language learning topic next week.

It’s now the end of the third week of my four-week sabbatical from work. I’ve been working hard behind the scenes on the site and on my first product.

Also, as I mentioned above, last Tuesday I published the first of two vlogs from the National Eisteddfod in Wales. The second one will be out on Tuesday.

Last week, too, I brought out the third in the Dr Popkins Method? video series. This time I told the story of how I learned Russian at the time of the collapse of the Soviet Union and German as the country was reunified.  I wonder whether Basque (or Welsh) independence could be the next thing to be sparked by language learning efforts 🙂 🙂

Here’s the Basque video diary for week three…..Me, still struggling…Still making tons of mistakes. Still not feeling as fluent as I think I should be by this stage….But, still in business….