How do you learn a language on the internet?   For three months from the third week of July, I was taking part in the fourth run of Brian Kwong’s collaborative online language learning “Add1Challenge” (2021 update – now run by Benny Lewis).  With the ninety days now up, it’s high time for my final report and review.

To recap briefly from my earlier post: the Add1Challenge is not an on-line language course.   The idea is to use the net to help us language learners with two of the major problems that we often face: maintaining motivation and setting aside regular time to study.  The target, at the end of the ninety days, is to hold a 15 minute conversation in your target language and share it on-line with other participants. You commit yourself in advance to a regular study routine (of your own choice) and log your completed study sessions on an “Accountability Tracking” Google spreadsheet, shared with other members of a subgroup of about ten.

You are allowed to modify your schedule if necessary but the key is to have one and try to keep to it.  You are also encouraged to link up as study groups by language (not relevant for me, as the only Basque learner) and also have weekly exchange with your two buddies (ideally, again, studying “your” language).  There is a Facebook discussion group for all participants. 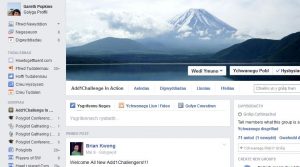 Since my update post on the Challenge, I have maintained the study patterns I set out then.  The focus has been on using Anki decks and my text books (Assimil, Bakarka 1, Colloquial Basque and my class materials).

My evaluation of the usefulness of the accountability side of the Challenge remains as it was a few weeks in: the real personal value for me was the added accountability of having to report back via the tacking table.  This really did provide an added incentive to study.  Maybe a combination of not wanting to let the team down (there was a light-hearted competition between the buddy groups of three for best collective record), saying “hey, look at me, haven’t I been good today” and the inner satisfaction of another notch on the tally.

A more personal touch was added by a weekly private exchange of messages via Facebook with my buddies, Sterling (learning Korean) and Hale (Japanese, though he, unfortunately, dropped out part way through).

My intended study regime was an hour a day at least five days a week.  In the event, I managed nineteen Skype lessons.  7 with Amaia (plus an eighth farewell meet up in a café) and 12 with Irantzu (plus the final recording session).  I recorded scheduled study for at least an hour on 59 of the 90 days.  I should have studied on 64 of the 90 days (five sevenths).  Still, I studied for more than the allotted hour many times at weekend (certainly enough to make up the five missing hours).

My total also excluded the additional listening on the MP3 player when jogging, to the internet radio when getting ready for work in the morning and work on the Anki decks/with Assimil in the jam-packed underground train to and from work.  For this reason, I don’t  think it’s stretching it at all to say that I have more or less met the target. 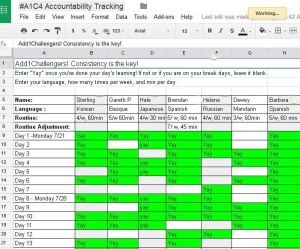 Consistency is Key! Accountability tracking in the Google Spreadsheet.

The Facebook community was a source of mutual support along the way.  I relied on this less than some Challengers, as I’m lucky to be quite good at self-motivation, but I certainly enjoyed the feeling of being part of a wider community and following the discussion and picked up some useful ideas for my own langauge learning.

Most Facebook posts were in English as the common language,  though there were some in people’s target languages, especially Chinese and Japanese (at least one participant had English the target).  Mainstay posts were the video clips that some people posted of  their progress along the way.  A couple of Challengers even recorded themselves singing songs in their new languages.  Another regular was updates on scheduling: how people were tweaking or setting intermediate targets (for example for the start of a new month).

A major theme of the Facebook discussion was  how to use italki.  People were keen to spread the news when they found a good teacher (I couldn’t find any for Basque and ended up arranging my own sessions directly on Skype with help from Maider, my term-time class teacher).

Some people reported that they were nervous at finding teachers or conversation partners and trying out their nascent abilities on-line.  I had never tried to learn via video link but you soon overcome any initial nerves.  Italki ran an “October challenge” and there was a to and fro on Facebook about whether to take part.  Some Challengers opted to do so to supplement the Add1Challenge, others felt this would be too much.

Challengers also shared experiences with other on-line language tools such as Busuu.com, librivox.org, linguisticator.com, verbix.com, “Learning with Texts” and BliuBliu and debated the merits of language learning apps such as Duolinguo, Anki, Memrise.  They also discussed resources for learning individual languages (for example, coursera.org or japanesepod.101.com).  It was good to be reminded the high quality programming on arte.tv.  I used to enjoy the Arte channel when I lived in Germany but that was in pre-internet days and I hadn’t given the channel a thought since.  Check out the site if you’re studying French or German.  It wasn’t all the whizz-bang of the latest smart technology.  People shared simple links to TED talks and on-line articles and discussed the traditional reading material.  One great low-tech idea to try in the real world (remember that place?) was to take a guided tour of the city where you live but in your target language.

The Mandarin study group were the most active Facebook (and I think they were also having practice sessions with each other off piste).  At one point they were discussing whether their google hangout sessions could be “gamified”.  One learner suggested a tour of his home town using google maps.  Another time, the topic was whether keyboard programs or pinyin are best to type Chinese characters.  There’s at least one problem that a Basque learner doesn’t face!

However good the technology, the human factor is central to a ninety day study programme.  The Facebook group discussed how to deal with motivational slumps, the importance of language learning routines, maintaining knowledge of first foreign langauge when you’re focussed on another and whether learning a language gives you a new personality.

Over three months, there’s a pretty good chance that life will intervene.  One student of Croatian lost all her language apps when, while on holiday in Spain, she dropped her phone down the toilet.   As an excuse for slacking, that could have been up there with “sorry, teacher, the dog ate my homework”  but no, undeterred by this dramatic turn of events, she fell back on her Garfield comic in Croatian.  Five weeks into the Challenge I fell and broke my arm.  I had to spend a night in hospital after an operation to reset the bone.  Long waits before admission and the days recuperating were partly filled by Anki and Assimil.  Waits to see the consultants for subsequent check ups at least meant extra time to whip out these resources.  You can’t always control what happens to you.  You can control how you react to it. 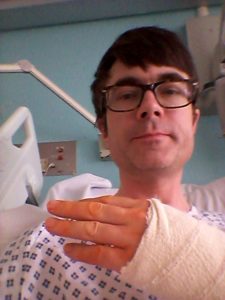 Not part of the plan for the middle of my Add1Challenge. Besoa hautsi nuen….as they might say in Bilbao.

People shared some personal highs as well as lows.  In early August, a learner posted that he had been able to use his newly-acquired Spanish with his grandmother, who hardly speaks English.   Towards the end of September a German learner in her third Challenge won a holiday to Ireland in a competition to write a blog post in German about her summer (not sure why the organisers weren’t offering a prize to Germany…).   It was good to see Challengers using their new language skills “in the field” .  Two had a real-world meet up in Gothenburg. with the one learning Swedish ordering the meal.  One day we  saw a veteran of two other Challenges – now just beginning a year teaching English in Japan – in action kitting himself out with a futon, mattress (shikibuton) and quilt (kakebuton) on the mean streets of Chiba.   Isn’t it a great boost when you manage to solve a practical problem in your new language?

As the thirty-day milestone approached, Brian announced that Benny the “Irish Polyglot”  Lewis, had offered to publish posts about three Challengers’ experiences on his Fluent in Three Months blog.  Emily, Kenneth and Kevin were chosen and you can read about their experiences at thirty and sixty days here and here.  At the end of August Brian also organised a “Burning Issues” live question-and-answer session with Benny.  There was a second one mid-way through August with Richard Simcott, the UK’s most multi-lingual citizen.

At the end of September my Basque classes resumed.  I am quite sure that I was further on than I would have been without the regular pace and the Skype sessions that the Add1 Challenge helped me to maintain during the summer break.

The last month of the Challenge was a continuation of my weekly study schedule and Skype sessions with Irantzu.  A late break (but also a language boost) was my trip to Novi Sad for the Polyglot Conference, where it was great to meet Brian again (we met first in Berlin at the Gathering in June). 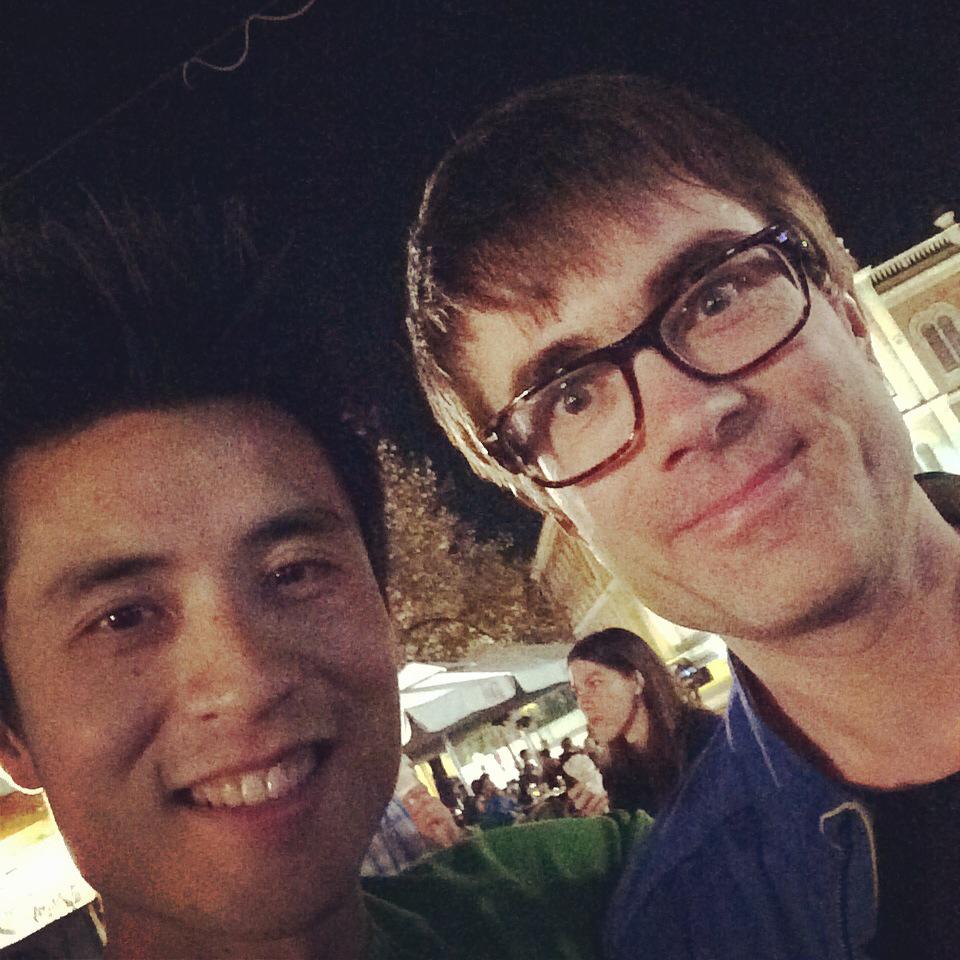 By early October, the discussion on Facebook was turning to life after the Challenge: hanging up the dictionary, carrying on after a brief pause for breath, or – for learners of multiple languages – giving the others some TLC?   One of the aims of the Challenge is to aid study habit forming.  If you’ve set yourself a schedule realistic enough to maintain over ninety days, you should be able to steam ahead with it afterwards.  My class meant that for me the way forward was clear.  I’ll be trying to keep a similar weekly schedule (with much of the time back on reviewing class materials and doing homework), including keeping up with one or two sessions a week on Skype.

The final task in the last week of October was to record our 90 day conversation.  To judge from the Facebook group, I wasn’t the only one for whom the technical side of this threatened to eclipse the linguistic one.  In the end, phased by attempts to flip the picture-in-a-picture or record I split screen, I came up with an audio clip with a screenshot.  There is too much um-ing an ah-ing and I’m making lots of mistakes but given that I could barely string a couple of words together at the beginning of the Challenge, I’m counting this as a win:

“Bai” is the Basque for “yes”, by the way.  It may sound like “bye” but no, we weren’t both trying to get off the call from almost the very beginning of the conversation onwards.

It has been great to watch other people’s final videos on the Facebook Group.  Congratulations to the joint-winners of buddy group competition.  Members of two groups met their individual targets all the way through: “L’équipe merveilleux” (Ryan, Adam, Lauren) and team, “さ た み！！”  (Talia, Miri and Sandy).  It’s also good to hear that many Add1Challenge 4 participants, are, like me seriously considering participating in Add1Challenge 5 in the New Year.  Update: I went on to finish +1C5 successfully and you can read about it here.  I then did +1C8 for Basque and +1C10 with German and then +1C15 with Russian.  Maybe see you in the Facebook group in the next Add1Challenge?  You can get more details by following this link on the resources page.