The Add1Challenge on-line language learning club is back and I’m in.

The commitment to regular study in round 4 of Brian Kwong’s initiative was a great way to give structure to my Basque studies during last summer’s break in my night classes at the London Basque Society.  Reporting back daily, weekly and monthly to my study group helped with motivation.  It was also informative to share language learning tips and resources in the Facebook Group.  The Group was also a source of community and mutual encouragement.  I explained here how the Challenge is organised.  For Add1Challenge 5, I’ll limit myself to blogging about what’s new, including updates on my progress with Basque.  The 30-day milestone is 2 February; 60 days – 12 March and the big one – the 90 day finish – is 11 April.  That’s when we have to post a full conversation in our target language.

It hasn’t all been quiet on the Basque front since the end of the Challenge.  One of the points of the Challenge is to help people establish regular study habits, which they can then continue afterwards.  This rings true to performance wisdom: it’s good to have goals, but if you start off with an ambitious target and a burst of energy, it’s odds on you’ll burn out or that life will intervene to knock you off course.  To make real improvements, it’s better to chill as to the end result and embed a sustainable process.  Create a productive habit!

My formal classes resumed in late September.  Term ended with a final class in mid December and we resumed last Tuesday, 13 January and are continuing to work through the language’s fascinatingly alien structures and vocab…..and discover more about the culture of the Basque Country.  Classes or not, I have continued to study at home and on my daily commute.  I have also keep up the passive exposure to speech radio and am increasingly able to understand snippets and sometimes even the topic of a news report or discussion in the language.

You get better at speaking by – wait for it – speaking…. and three times a week feels like the minimum amount of practice.  For Add1Challenge 4 I started experimenting with Skype for language learning for the first time.  Since then, I  have continued half-hour Skype sessions with one of last year’s language partners, Iranzu.  Due to the usual Christmas and New Year festivities, I did let the sessions became too infrequent.  We resumed this week.   It is certainly getting easier to chat at a basic level.  I had also able to do this with other guests during two lively events: the meal on the Day of the London Basque Society (Elkartearen Eguna) on 25 October and the Basque Society Christmas party (Olentzero Bazkaria) on 13 December. 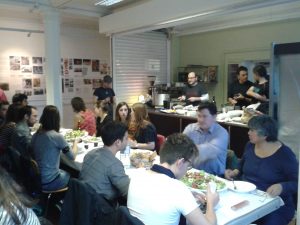 As with Add1Challenge4, would-be participants in round 5 had to make a short application video.  Mine went in at the very last minute.  The coming months already looked too busy for this additional commitment.  Then I realised that I this was exactly why I needed to sign up: to make sure that my Basque learning is not limited to my Tuesday night class and rushed homework the night before.  In the application I recommit myself to my Add1Challenge4 schedule of working in the language an hour a day, five days a week and also reveal my punishment if I fail to maintain the pace.  The delivery is a bit stilted at the beginning, but I do warm to my theme (well, sort of) 🙂 :

There are about eighty Challengers this time.  Brian has divided us into eight groups.  They are lightheartedly competing against each other to see which has the most members able to stick to their schedules.  Mandarin is by far the most popular language (I counted fifteen Challengers), followed by Japanese , French and German on ten each.  Then come Spanish and Italian – six each; Cantonese – five.   Besides me, there are some other “lone wolf” learners (Arabic, Turkish, Esperanto, Burmese, Indonesian….).  It’s also good to see another marginalised language in the list along with my Basque: Máirín is starting Scottish Gaelic.

It’s great to see some familiar faces from Add1Challenge4.  Also on board are several friendly faces from the Polyglot community, notably Judith Meyer, organiser of the Polyglot Gathering (Berlin), who is learning Hebrew from scratch.  Brian himself is continuing learning Japanese.

As in Add1Challenge4, we are all in a mini “mastermind group” – three learners who check in via Facebook chat once a week to update each other on progress.  My two partners there are Richard, from Ontario, who’s learning Spanish and Cynthia (New York City, Korean).  I aim to put more into the wider Facebook discussions this time round.  I was a bit slow off the mark in +1C4.  The main problem is the juggling the time it takes against study time and other commitments.

As a yardstick against which to measure our progress, we were also asked to record ourselves speaking our target language.   Some complete beginners talked about their steps to learn a new alphabet or to find a teacher and were perhaps able to share the odd phrase, culled from a crisp new textbook.  People continuing with a language had more to work with.  If I am not arrested for the crimes against the Basque language committed in the clip below, I will post some more as we move through the Challenge.  After making the recording, I kicked myself for a host of basic mistakes.  No doubt I make many others that I’m not even aware of.   Ok, I’d usually say embrace mistakes as jolts forward on the road to mastery…. but hey, that’s my advice for other people.  As I joked to my fellow participants, for me the only way is up (I hope!) 😉

UPDATE: On 11 April a bunch of us successfully completed the Add 1 Challenge 5.  I’ll be posting again about the experience soon.

UPDATE: Maybe see you in next Add1Challenge?  More details here.