It’s already over a month since the end of Add1Challenge 5, the on-line 90-day language study group in which I participated as a Basque learner this spring (following on from my time in Add1Challenge 4, last summer).  This report may be late, but at least it’s timely.  The next Add1Challenge, no 8, begins on 1 June.  I’ve just sent off my video application. [Update since this post, I finishing +1C8 and I went on to complete +1C10 with German and +1C15 with Russian.  See a post on the German here.].

My commitment for +1C5 was to study Basque for one hour a day, at least five days a week.  I made it!  A “full house” would have  been an hour’s study five sevenths of the time, 64 out of 90 days.  I  managed 68 days spread pretty evenly across the three months.  That’s in keeping with the emphasis in the Challenge – and in successful language learning in general – on forming regular, sustainable study habits:

We had to post short progress videos to the youtube group on day 30 and day 60.  You can find those on the Howtogetfluent youtube channel.  As in +1C4, I recorded the “biggie”, the end of Challenge fifteen minute conversation with Iranzu, the long-standing language partner with whom I started working almost a year ago.

During +1C5 I had thirteen half-hour sessions Basque conversation sessions with Iranzu.  Beginning half way through the Challenge, I also did eight sessions with Beñat, a new language partner whom I’d got to know at the London Basque Society’s Christmas meal.  He’s a linguist studying language revival at London’s School of African and Oriental Studies, himself learning Kurdish and Quechua.

Beñat was up for pre-work sessions and fitting these in was something of an innovation for me.  As an international lawyer, I’m used to having to work (very) late on the latest deal and I’ve always  regarded myself as a “night owl”.  The “early bird” experiment worked, though.  It was good to have half of my allotted time under my belt before I left for the office (granted, my current legal role enables me to get to bed at a more reasonable time!).  I even did some 30 min morning study on non-Skype days.  Trying out new ways of working and new study methods is also part of the ethos of the Challenge.  I carried on with my weekly Tuesday evening night class too and with my study alone using the Assimil course, the Bakarka 1 textbook and Colloquial Basque.  My internet radio was regularly tuned to Euskal Irratia (Basque language radio) as I shaved and showered of a morning.  There was one big London Basque Society event during the Challenge: a meet on London’s South Bank to shoot a clip promoting the biennial “Korrika” mass run for the language.  I got to speak a lot of Basque that afternoon.

As in +1C4, membership of the closed Facebook community was very valuable.  It was fascinating to follow the ups and downs of different learners.  I was full of admiration for those getting stuck into Chinese, Japanese and Korean.  Where several people were doing the same language, they also had the additional option of forming “study groups” using “Google hangouts” or Skype video conferencing and it seemed that the Mandarin and the French learners were among the most active and sociable.  I felt a particular affinity myself to those fellow learners of lesser-used or marginsalised languages, such as Nicky, working on the Kurmanji dialect of Kurdish and Maureen, studying Scottish Gaelic.  Maureen almost gave up in despair for lack of on-line resources and language partners but she stuck at it and finished the Challenge with an inspirational trip to the Isle of Skye by which time she had plans to attend a Gaelic Summer School.  I hope to interview Maureen on howtogetfluent.com soon.

At the end of the Challenge, several expressed the gratitude for the encouragement that they had taken from the fellowship and encouragement through the Facebook group.  It’s true, the Add1Challenge provides a great framework to sustain you in your studies.   There’s a big “but”, though: only you can get clear on your own “why” before you start.  Alongside your rational reasons, a little love for your new language will go a long way.  Of course, life events can get in the way of the best laid plans but those who had to give up but who were able to resume later were welcomed back with open arms.  About forty per cent of us completed the full ninety days.

It’s sensible to start small with your non-negotiable routine for the first thirty days as well.  If you start with a schedule which is unrealistic for you at this point in your life, you’re more likely to crash and burn.  You can always increase the commitment on the basis of thirty day’s experience.  Don’t be afraid to tone it down a bit, either.  It’s keeping going that counts.  On +1C8, I’ll be sticking with five days a week, but going down to thirty minutes.  That’s because I want to return to my Russian this summer as well.

I sometimes found myself behind the curve a bit with a lot of the on-line discussion but my impression was that the Facebook group was even livelier than during +1C4.  Some of the familiar themes continued, such as using italki and the merits of various vocab apps.  Links to useful on-line resources were posted, advice given, opinions traded.  There was also an outbreak of intriguing lists: favourite films in your language, favourite songs and even favourite comedians.

The grand finale was the announcement of the winner of the round trip to the country of their target language.  Everyone was eligible who had completed the ninety days and submitted all the update videos.  The field was narrowed by popular vote to three finalists, Sara (learning French), Ian (learning Swedish) and Jake (learning Chinese).  The judges were Judith Meyer (also participating in +1C5) and her fellow “internet Polyglots” Benny Lewis and Richard Simcott.  Well done to their chosen overall winner, Jake.  At fourteen, Jake was the youngest participant and his completion of the Challenge was particularly impressive.

Two and a half weeks after the end of the Challenge came the chance to meet up at the Polyglot Gathering in Berlin with Add1Challenge founder Brian Kwong and a number of other Challengers.  Thanks for the Add1Challenge T-shirt, Brian!  Here’s a shot I took of the group giving feedback over lunch: 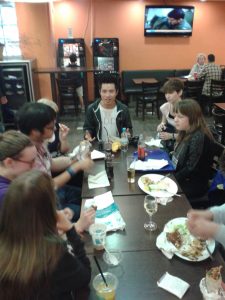 Brian Kwong and +1C participants, feedback lunch during the Polyglot Gathering, Berlin May 2015.

Here’s my ninety day video, thanks again to Iranzu.  I still have a long way to go on my Basque journey but I’ve come a long way too!

Maybe see you in the Facebook group in the next Add1Challenge?  You can sign up here for the next Add1Challenge (full disclosure – that’s an affiliate link.  If you sign up, it benefits me as well, but rest assured, my recommendation is genuine. I think the Challenge is very worthwhile: +1C10 was my fourth!).

If you’ve already participated or are thinking of doing so, share your thoughts or ask any questions in the comments section below.