If you enjoy large events that attract language lovers of all stripes, London’s annual Language Show (also known as Language Show Live) is well worth a visit. I love the vibe and always come away enthused by inspiring conversations and with a new contact or three. I’ve made a fun, informal vlog once again.  It’s a way to remember the event and give you a flavour of what’s on offer (the link’s at the bottom of this post).

The Language Show is a trade fair at heart. It is aimed mainly at language professionals (translators, interpreters and those who train them) and teachers (of Modern Foreign Languages in the British education system and of English to Adults).  It’s also for purveyors of all manner of language-related products (mainly small publishers of printed materials and app start-ups). 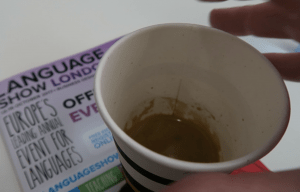 Pre-loading in the café

There are also things for those interested in a career in languages, too: talks and CV workshops.

There’s less specifically for independent adult language learners but we can visit the stands of the “official” language promotion bodies of the biggie language powers.  (Think the Goethe and Cervantes Institutes, the Inistitut Francais, Japan Foundation, British Council (happy to promote Polish but, as all too usual this year, not Welsh)).

The admirable “Speak to the Future” (a UK campaign for languages) was also very much involved again.

We learners can also browse the books.

We can weigh up whether there’s anything behind the latest apps (or whether their enthusiastic promoters are delusional).

We can enjoy the cultural programme of song and dance. 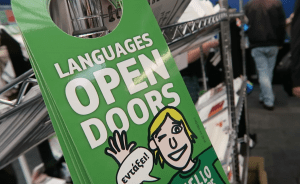 Shut that door! 🙁 The EU was (perhaps surprisingly) still at the Show

The Show took place during my Icelandic “Thirty Day Focus” .  It was just a week before my first ever trip to Iceland.

I was thus delighted to see that Icelandic was one of the free, thirty-minute language taster languages. I partook with my good friend Kris from ActualFluency (who, as a Dane, did have a bit of a Nordic head start). 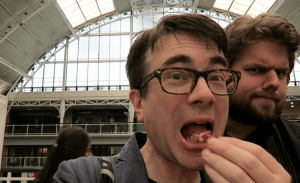 Hamming it up – a sample from a Spanish stand. Kris from Actual Fluency appears to disapprove as I desert the “Danish” bacon brand.

This year it moved to a new venue in bustling Islington, north London: the Business Design Centre.

The core of the BDC is the spectacular former Royal Agricultural Hall (1862) that I’d never visited (or, I confess, even heard of) before. It was worth turning up just to spend some time in this inspiring space. 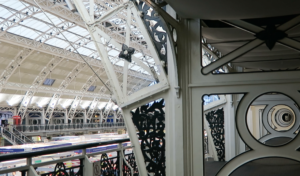 While the format and many of the exhibitors were familiar from previous years, this time there seemed to me to be fewer stands.

Several regulars whom I’ve enjoyed meeting in the past were absent.  I missed the friendly team from FlashSticks and the Learning Welsh contingent. Major publishers such as Routledge and Collins bowed out several years ago.

The event, while busy enough, seemed to me less well-attended than previously.

For the first time, you had to pay for a general ticket to attend the seminars and talks. The £12 daily fee maybe only made sense for school teachers who need to do accredited continual professional development) or the super-interested (such as me).

In the end, a late start on my part meant that I only made it to one session, a good discussion on translation as a career.

Altogether, the Show seemed to be in a period of transition….

Just after this year’s event, the Show was reacquired by Jonathan Scott who (as you can read on the new website) ran the show in the mid-Noughties.

Next year the action will be back at Olympia (but in a different hall).  The seminars will be free as in previous years (yay!).  I hope the branding will be sorted out (I rather liked “Language Show Live”, myself).

Next year’s dates have move back a month from mid October.  (The Glasgow version, held in March this year and last, has been scrapped.)

Previous reviews and vlogs from the Language Show: