I’ve just attended Language Show Live at London’s Olympia. The show – which is free – is held there over three days every October (and, since last year, there’s one in March, in Glasgow).  The event’s core is a large hall packed with exhibitors including publishers, app developers, language schools, educational agencies and cultural institutions.  I went on Saturday and Sunday taking in the sights and sounds and shooting footage for a fun vlog (link at the bottom).

I went in keen to compare with previous years as this was my fourth consecutive visit.  I reviewed and vlogged on last year’s event and reviewed the one before that too.

It was good to see that there was a Learn Welsh stand (I first spotted one last year).  There was a Basque stand there two years ago but there’s been nothing since.  A Basque speaker was manning the official Spanish stand, though. It was one of the guys I know here in London who’s learnt the language to an advanced level (and has studied at the Maizpide residential school where I was for the whole of September).  So, there’s a bit of Basque and Welsh in the vlog. 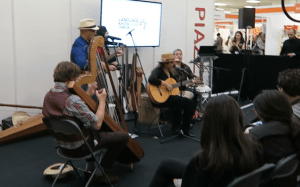 Live music on the Piazza.

As on my previous visits, Spanish seemed to be the most represented language among the 140 or so stands: there were a lot of commercial Spanish language companies offering studies abroad in tempting sunny locations. There was also an Argentinean stand.

I talked to the volunteers promoting learning Gujarati: the Sunday school of the (Hindu) Neasden Temple in north-west London. If ever there was a time to emphasise the UK’s cultural diversity, this is it.

Yes, Brexit hung over the event this year as it hangs over much in Britain at the moment. The EU traditionally has several big stands and was out in force this year again.  For how much longer?

I was talking to a couple of the guys on the stands who said that many of the British nationals who work in Brussels or Luxembourg are (if they qualify) applying for other EU passports.

Last year I attended a workshop run by Speak to the Future, “the campaign for languages”, a UK pressure group which promotes the study of language throughout British society. This year they ran a symposium on Languages Post Brexit and I spent quite a while talking to people on their stand and interviewed Bernardette Holmes, their campaign director, for the vlog.  She argued that languages would be more important than ever once the UK leaves the EU.

I had a good look at the varied offerings of some of those who make language products too. It was nice to talk to Frederico on the Flashsticks stand and Liz of uTalk (formerly EuroTalk), as last year.

There seemed to be fewer booksellers there than last year, which made it easier for me to exercise self-restraint when it came to purchases. I did order a new advanced Russian textbook, which will supplement the ones I’m already using.

My other purchase was a small book of Grimm fairy tales from Klingbjerg – a husband and wife team who publish classic short stories in Danish, English, French, German with glossaries to help you read them. 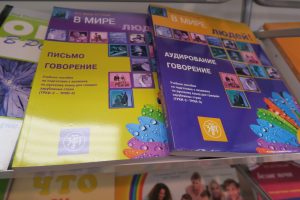 There was the usual full timetable of events in the conference rooms upstairs: free seminars and lectures, many aimed at language professionals such as interpreters and translators, interpreters and at teachers in the British education system or teachers of English as a foreign langauge.

On the fringes of the main Hall there were the usual careers sessions (useful for recent language graduates in particular) and language taster classes in Turkish, Korean, Mandarin, Welsh, Arabic, Japanense, French, Brazilian Portuguese, Russian, German and British Sign Language.

In the centre was a space for demonstrations and performances of music and dance, the Japanese being most colourfully present in the latter this year. 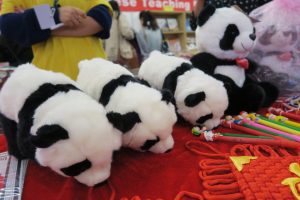 Guess which language was represented here….

Back to the stands: there were large, interesting official Chinese and Korean stands (as last year) and a good Turkish stand (with free Turkish Delight).  I asked one of The Dogs Trust people (Language Show newbies) why they had a stand and he made the good point that if they just hung out at pet events, they’d be limiting their potential audience.

At the Institute Français stand and (for the second year running) at the Goethe Institute they wouldn’t speak to me on camera for fear of their superiors.  Come on bosses, get your social media attitude straight!  This is just the sort of bureaucratic “jobsworthness” that puts so many of my compatriots right off the EU!

No matter!  There was lots to see and lots of people to talk to.  The guy pictured with me below, for example, displayed no reticence (he’s the one on the left) 🙂  The vlog gets across something of the vibe, so take a look!  Were you there or have you visited similar events elsewhere? Let me know your thoughts or tips in the comments or by email (address under the About tab).