Language Show Live is a kind of “trade fair meets educational event” which styles itself as “Europe’s leading annual event for people passionate about languages”.  I attended for the first time in 2013.  Again in 2014, the event took place one Friday, Saturday and Sunday in the middle of October.  The venue: the historic Olympia Exhibition Centre  in London’s West Kensington district.  The Show also kicked off a wider “National Language Festival“, a connected series of events and press articles organised by the British Academy and The Guardian newspaper.  Here are some impressions from my weekend at Olympia. 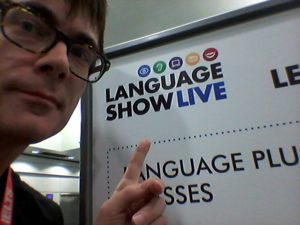 Anyone expecting the spectacular cast-iron vaults of the exhibition centre’s original “Grand Hall” (1886) overhead would have been disappointed.  Our gig was in a building dating from 1929, its art deco exterior fully equal to its original name: the “Empire Hall”.  Nowadays it is inoffensively known as “Olympia Central”, which fits its bland but very functional interior equally well.   The core of the Show was in the large hall on Level Two, which housed over two hundred stands and also several open spaces with chairs for talks and demos.  There were also a couple of café areas (always a welcome bleep on my radar).  On Level Three, we had four seminar rooms and three language classrooms.  I had only intended to visit on Saturday afternoon but I somehow found myself returning for most of Sunday.

The range of attendees included current university language students and recent graduates, no doubt keen to find out about job opportunities in the field. Other types much in evidence were teachers of English as a foreign language and those in the foreign language “industry” (such as educational policy makers and administrators, creators of learning materials, including publishers, those running language schools and journalists).  I guess that the biggest single group were teachers of modern languages in the official school system (pupils from infant age through to 18).  From September 2014, the study of at least one modern foreign language because compulsory in English schools for four- to five-year-olds and above.  Both the seminar programme, and many of the resources displayed on the stands reflected this (for England) radical development.

I had to beat a hasty retreat from a talk aimed at school teachers called “How can your teaching be consistently GOOD or OUTSTANDING”.  I realised as the speaker kicked off that the focus would inevitably be as much on “good” or “outstanding” as such but as categories of the external assessment required of teachers by the national educational inspectorate.  No doubt the talk was really helpful for jobbing school teachers, but I’m not one.  I don’t have to play the system.  I don’t give a flying board rubber about Ofsted (don’t bother looking it up).  I left with a shudder, reminded of the sheer awfulness of English education politics, all pseudo-business models and jargon-ridden discourse.  That said, the programme of seventeen “Teachers’ Seminars” looked interesting.  The sessions put on in the “Language Technology Zone” were also often relevant to school teachers.  They must have also have got a general shot in the arm from the energy and enthusiasm of the whole event, the chance to share practice and look at new materials.  One huge motivational boost – for me at least – came in the form of Eowyn Crisfield’s wonderful talk on “How languages can change your world”.

The programme of “Professionals’ Seminars” were mainly about non-teaching jobs using languages.   I attended Dr Daniel Tomozeiu‘s talk on”Professionalisation of the translation profession”.  It felt a bit too much of an “infomercial” for the courses he is involved with at the University of Westminster (including preparation for the Diploma in Translation exams set by the Chartered Institute of Linguists).  He did make some interesting points: the field is undergoing professionalisation; the Diploma – presented as an important part of this process – is a tough exam, with only a thirty to thirty-five percent pass rate; while the employment context is “challenging” for translators, in the wake of the banking crisis, financial institutions, at least, are hiring more translators.   Helen Campbell delivered her talk “Conference interpreting: what future?” with panache to a packed hall.  It was full of useful information and some amusing anecdotes.    It was the second good talk I’ve heard recently on interpreting as a career and I will come back to the subject in separate post.  I was frustrated to miss another talk on this theme, “So you think you know what an interpreter is?” by Danielle D’Hayer, as I recently met on her home turf at London Metropolitan University.  That is the other London HE institution, besides University of Westminster, which offers translation and interpreting courses.  Both universities had stands at the Show.

Other interesting-sounding seminars which I missed included a translation and interpreting leaders’ panel discussions, a session with the title “Future-proofing the profession: equipping the next generation of translators”, a talk on “A day in the life of a translator” and one on “Project management in the translation industry”.  The Chartered Institute of Linguists had a stand, as did the Institute of Translation and Interpreting, and the EU Directorate General for Translation.

There was also a “Careers Forum” with dedicated floor space, with some particularly useful-sounding events such as a session on “CVs that get results” repeated several times during the three days. 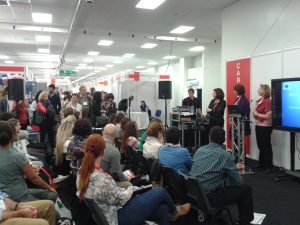 A seminar underway in the Careers Forum

Another focus of the Show was teaching English as a foreign language (“TEFL”).  There were twenty-four dedicated seminars, of which I regrettably only caught one, Marc Lowental‘s on”Using etymology to teach English vocabulary”.  Did you know that many Latin words have come into English twice via different routes such as carrus (car, wagon) as cattle (via northern French) and charge (via standard French)?  Testicle comes from Latin “testiculus”, that’s to say the “little witness” to, erm….let us say, a man’s virility.  I challenge you to forget that in a hurry.

Very little in the seminar programme was aimed specifically at those of us who teach adults languages other than English.  Neither were there dedicated talks aimed at adult language learners.  Still, keen learners could have tried the half-hour language taster classes in ten languages and “intensive” three-hour language classes in six languages (including English).   There were also many stands from providers of language courses to adults.  There was something of a London focus, with the institutions present including the  Institut Français, the Instituto Camões, the Instituto Cervantes, the Goethe-Institut, the Language Centre of  London University’s School of Oriental and African Studies and the admirable City Lit (an adult education centre in London which offers a huge range of courses across many different disciplines, including languages).

It was no surprise that the main school languages were most in evidence.  The Spanish market appeared to be the biggest.  Besides the Cervantes stand there was a separate Spanish Embassy stand (I felt like going up and asking – with a wink – for a leaflet on Catalan).  There were a number of commercial operations offering Spanish classes in sunny, tempting locations (complete with pictures of the beautiful young people, though I’m not sure whether they come as part of the package).  The Chinese stand was the largest of all.  There was a stand promoting Greek, several with an Arabic flavour and a number of Russian representatives (gathered on one stand).  The taster classes included Swahili and Persian.  For once, the Welsh were sufficiently together that a taster class in that language was included.  It was also great to see some Welsh school children competing with a small performance in French as part of the UK government’s “Routes into Languages” initiative.  The British Council were as clueless as ever when I asked for information about learning Welsh.  Could we please rename them the English Council?  Unlike last year, the EU stand did not have material in Welsh and Scottish Gaelic, despite their status as co-offical languages. 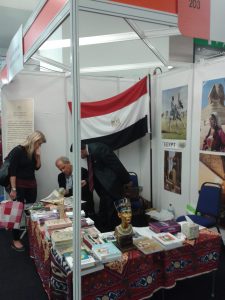 Compared with the Welsh, the Basques generally do seem to display more of what we will diplomatically call those “little witnesses”.  It helps that three of the seven Basque provinces have a government that is serious about their language.  It is with resigned disappointment,that I report that there was no official Welsh stand at the Show.  In contrast, it was a delight to stumble on the Extepare Basque Institute stand (funded by said Basque government).  There were some familiar faces there from the London Basque Society and various booklets about Basque language and culture were on offer.    There were two Basque-themed sessions on “the Piazza”.  One, on Kirmen Uribe’s poetry and prose fiction, I missed.  The other, which I caught, was a lecture by Dr Gorka Mercero, University of Liverpool.   His sophisticated analysis, including filmed interviews from the Basque Country, was on “Basque language: normalisation, anxieties and the need for post identity” and raised issues to which I will return. 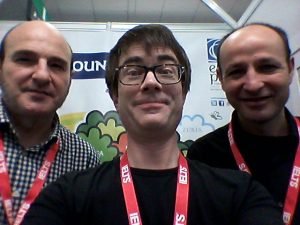 A crazed language nutter, flanked by two Etxepare (Basque Institute) staff, is escorted off their stand…

Going round all the stands was a pleasure.  It was interesting to see that the British Army Reserves – Intelligence and Education were there.  They no doubt concentrate on what works, with no frills, and it would be interesting to know more about how they teach languages.  Among others, it was good to meet the people at Flashsticks and also to talk briefly to the owner of Proverbium Limited, a company he has set up in his retirement to produce materials focussed on Europe’s rich tradition of proverbs and sayings.

Big publishers such as Routledge and Collins had stands.  Smaller publishers were also represented.  I jotted down some new titles for future reference, the beauties pictured below included. 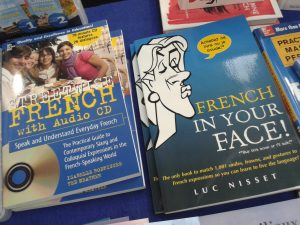 A French textbook looks down on us with suitable contempt

The last talk I attended, on the Sunday afternoon, was Adrian Pilbeam‘s “The intercultural dimension in business language training”.  I offer a course internally on cross-cultural training at the international law firm where I work, and it was good to compare notes and to see that Adrian and I are certainly singing from the same hymn sheet.  There was lively discussion as he repeatedly broke the multi-national audience into “buzz groups”.

On Saturday evening, I joined Lindsay Dow at the Association for Language Learning quiz at a pub called The Hand and Flower, just over the road from Olympia.  I suppose the question “Who was the founder of Esperanto?” could just about find its way into the general knowledge round down at the old Dog and Duck.  I wonder, though, how many pub quizzes in England have featured a list of twenty-four languages; the task: sort them into three columns: Romance, Slavic, Germanic…..?  Given the sophisticated crowd at the event, we did very well to come third (and within a couple of points of the winners).  Thanks there are also due to the two other distinctive “voices” from the language blogging world with whom we formed a team, J and Kerstin Hammes.  It was great to meet them both for the first time.  The informal off piste contacts you make and ideas you exchange at events such as Language Show Live are always as valuable as the formal activities.

Olympia hosts the next Language Show Live 2015 on 16 – 18 October 2015.  If you’re thinking of visiting, I hope my account has given you a flavour of what’s on offer.  Of course, I picked my personal path through.  Were you there?  What was your experience?  Let me know in the comments section below.