On Monday evening I sat down in front of my laptop to watch episode two of the travel show “Euskalonski” on Basque TV. It was exactly two weeks since I’d been filming for it with Pello Reparaz and his TV crew. This was the culmination of my “Basque Boost” project. Four weeks of ramped-up work on the Basque language. I’ve made a vlog sharing the inside view of the whole shoot. The link’s at the bottom of this post. First, I wanted to tell you more about how the day went and also to let you have a link to the full show (though I’m not sure how long that will stay live on Basque TV’s player).

Regular readers will know that I’ve been learning Basque for several years and am a lower intermediate level speaker. It’s unique langauge – an “isolate” related to no other (rather like Japanese or Korean).

It’s spoken by 700,000 people in the Basque Country which straddles the western end of the Pyrenees and the adjacent coastline.

The Basque Country isn’t independent (yet). Four of the seven historic provinces are in the Spanish state and have limited self-government (three form the Basque Autonomous Region (centred on Bilboa, Donosia or San Sebastián and Gasteiz or Vittoria, the fourth is Navarre (Iruña/Pamplona). The “northern” three are the western half of the French “Pyrénées-Atlantiques” department (well-known locations include Miarritz/Biarritz and Baiona/Bayonne).

Getting ready in the morning and some last-minute nerves

The morning started with a run in the park, with Basque Radio playing through the headphones.

I’d deliberately not booked a lesson on Skype. The intention was to leave things to “settle” and to let my head clear, rather in the way I do before an exam. In the end, though, I rehearsed my anticipated topics a couple of times in the morning.

I was also checking I had all the ingredients ready to make Welsh cakes.

Then I tidying the place up a bit.

I have to admit I was not feeling enthusiastic about the upcoming afternoon. I just didn’t feel that my Basque was good enough. Maybe I’d have pulled out if I could.

This is quite a typical pattern for me. I am getting better at standing “outside myself” and recognising how I fee for what it is.

I left the house at shortly after three in the afternoon, armed with my vlogging camera and phone. I’d decided to vlog the afternoon. No surprises there.

I met presenter Pello Reparaz and the film crew by Tower Pier on the north bank of the Thames, in the shadow of the Tower of London .

Pello is a musician from the northern (most Basque) part of Navarre province (one of the seven traditional Basque provinces and a semi-autonomous region within the Spanish state. He has a group called Vendetta.

With Pello were a crew of four. The director (who also did some filming), two cameramen and Joseba, the producer.

They were all very friendly and explained more about the programme, “Euskalonski”, while mic-ing me up. 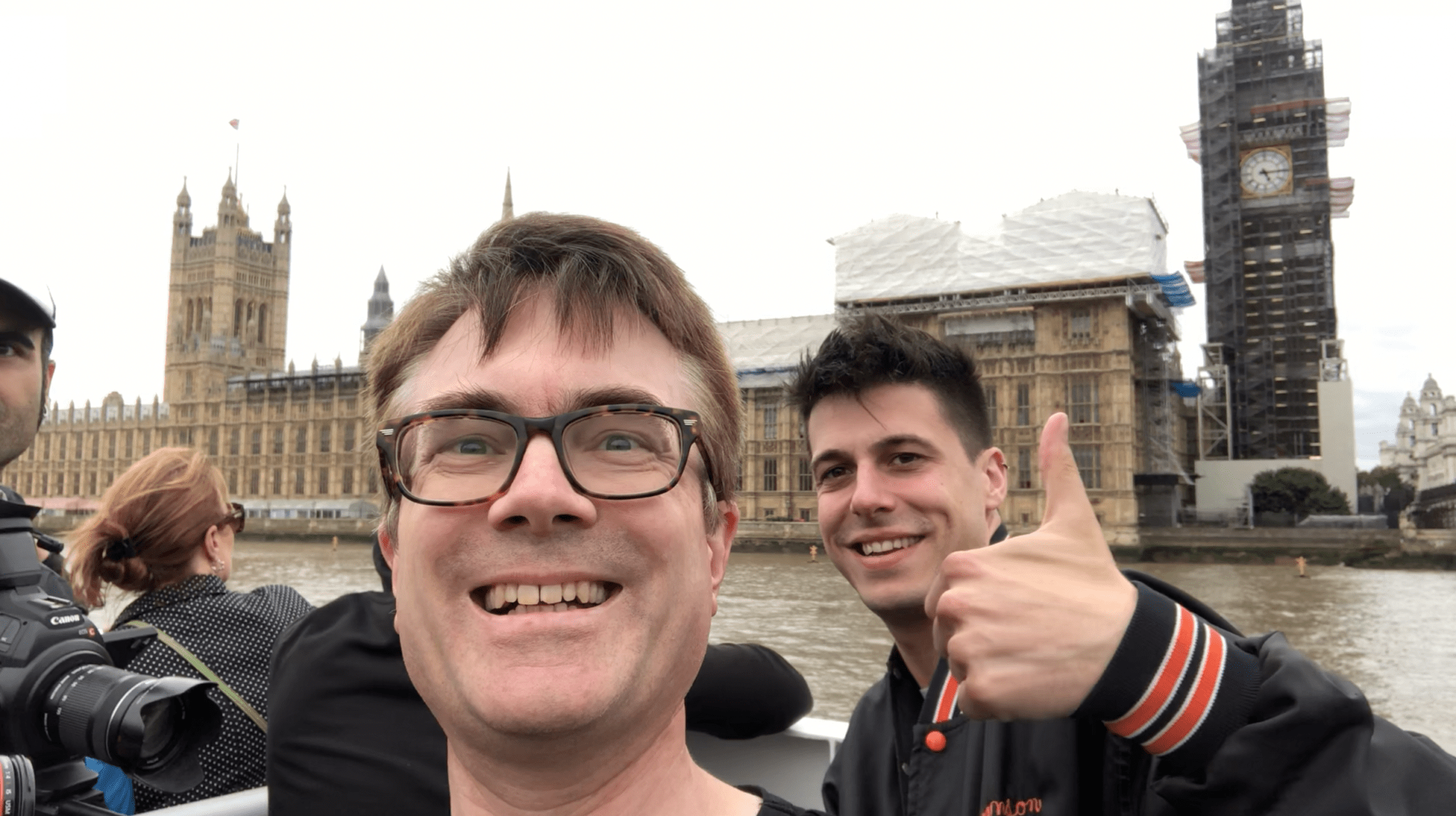 Passing the Palace of Westminster by boat (with Pello Reparaz, musician and presenter of “Euskalonski”

Filming on the river bank and atop a riverboat

Filming started with brief exchange between Pello and me on the river bank. I explained where we were, pointing out the Tower, Tower Bridge (telling the audience that it was fifty years old, when I meant one-hundred and fifty) and the ovoid City Hall on the South Bank. I pointed out Westminster and the “London Eye” big wheel in the in the distance and explained that London, historically, was two separate cities.

Pello asked some questions about my background, my mixed English/Welsh identity and how I came to learn Welsh.

We then got on a tourist cruise boat and filmed a bit more conversation on the open top deck.

It had been my suggestion to film from the boat and it certainly provided some great footage of the sights. It was a pity it was a very overcast day, but at least it wasn’t raining.

I felt quite tense and nervous. In part, that’s my default setting. Added to that there was also a bit of performance anxiety about the language and uncertainty about the finer details of what they wanted me to do. Also, it turned out that we weren’t supposed to be filming on the boat, as an officious employee delighted in telling us.

I was more relaxed once we got off the boat on the north bank at Westminster by the Boudica statue.

We filmed Pello singing the Sex Pistols’ “God save the Queen” (!) by the steps with me standing by listning (they had wanted me to sing but I drew the line there).

There’s a musical theme to the whole series with several of the other interviewees whom Pello met singing or playing instruments and Pello himself paying a synth at various points around the town. 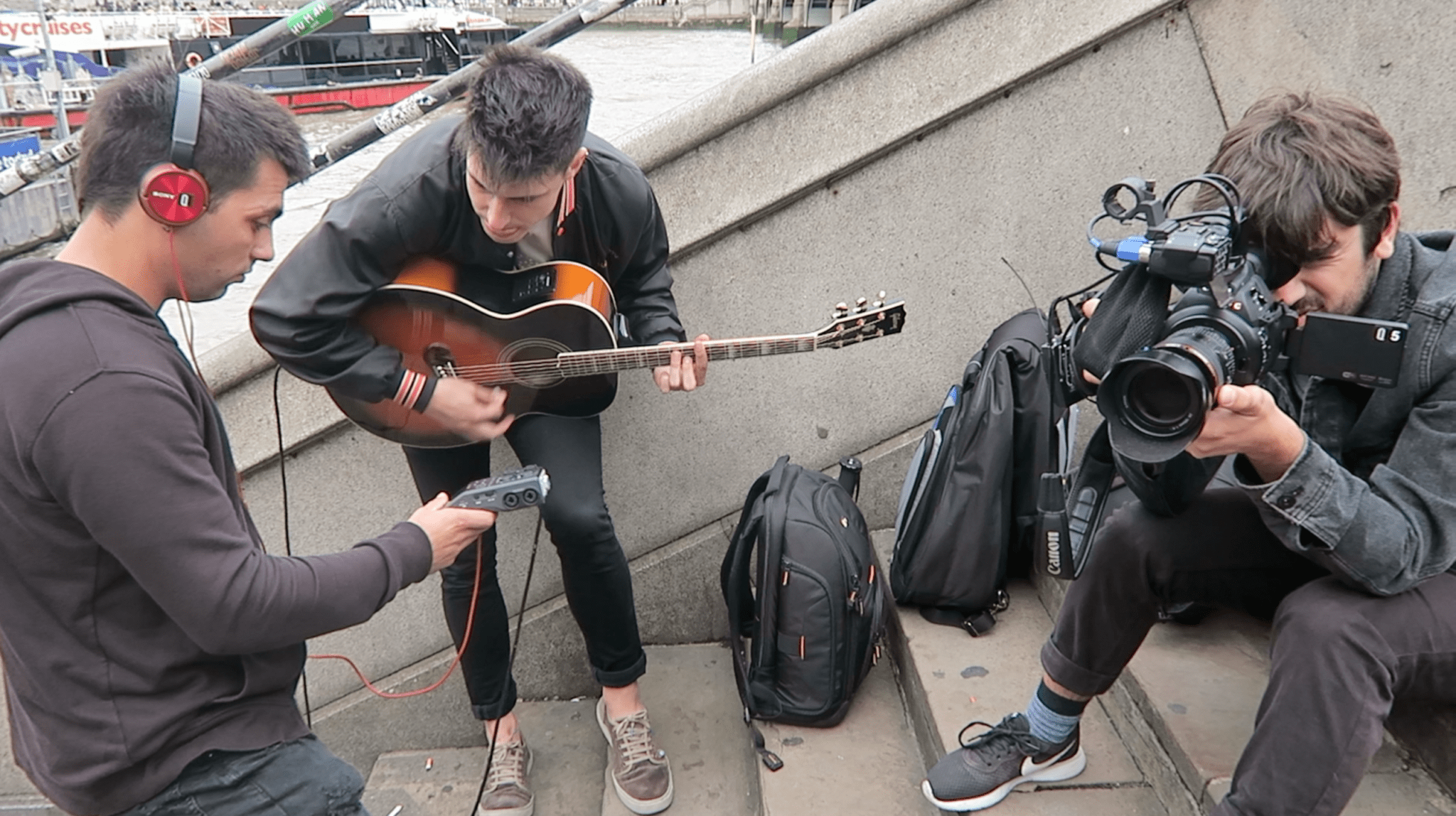 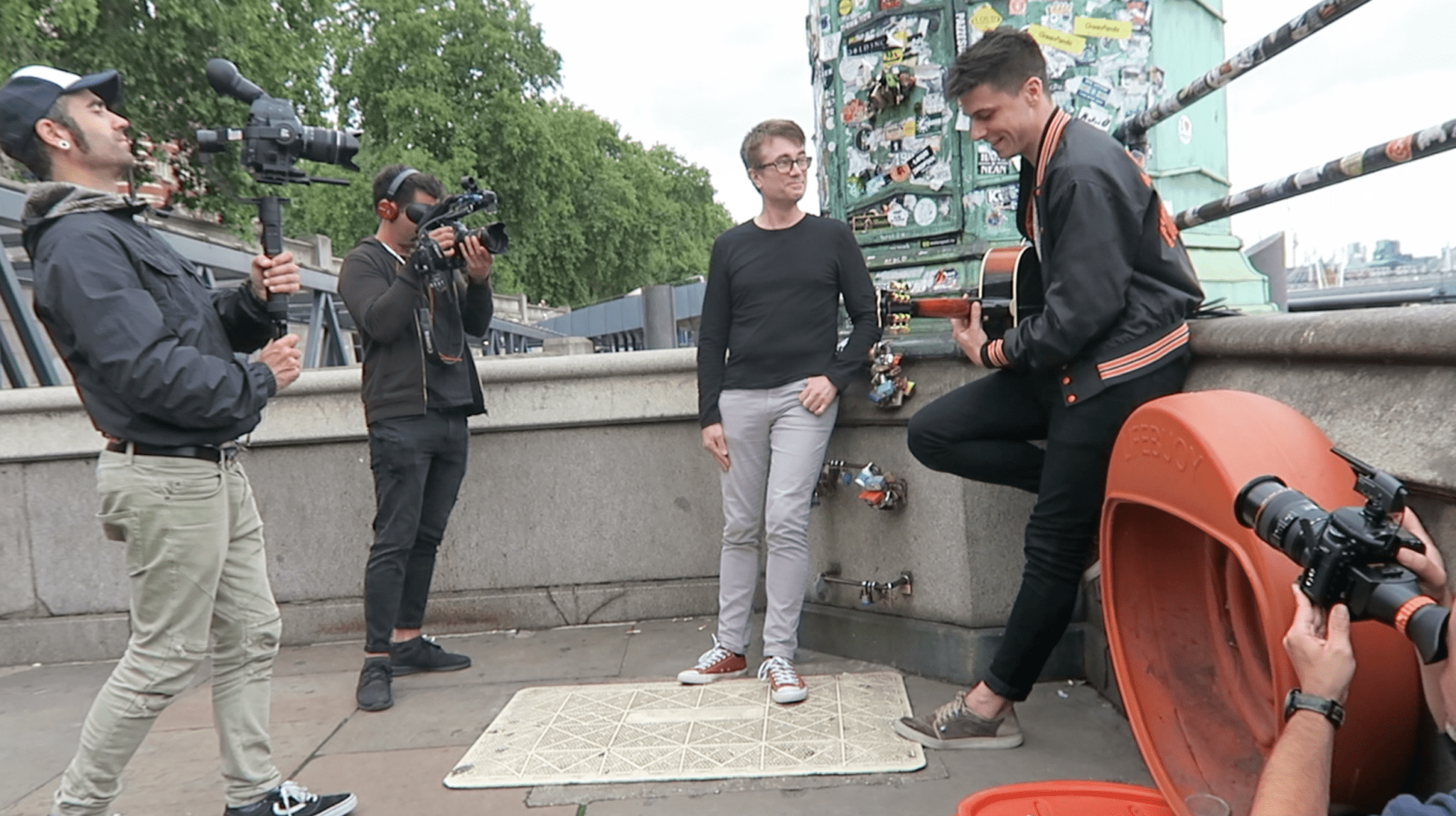 An anthem at the foot of the statue of the ancient British (i.e. Welsh) Queen Boudica, Westminster

It was about 7.30 when we arrived in Brixton by tube, after a bit more filming underground en route (none of which made it into the programme).

It was interesting for them to see a bit Brixton on the walk from the tube to my house. It’s not a touristy place but very full on with lots of sights, sounds and smells (buskers, incense sellers, various market stalls,lots and lots of people).

Given the musical strand to the programme, I missed a trick in not taking them to see (and film) the David Bowie mural just over the road from the underground station exit (Bowie was born in Brixton). Also, I should have explained better about the connection between Eddie Grant’s song Electric Avenue and the run-down market street by the same name in the centre of Brixton (the first market street in Britain to be lit by electric light). 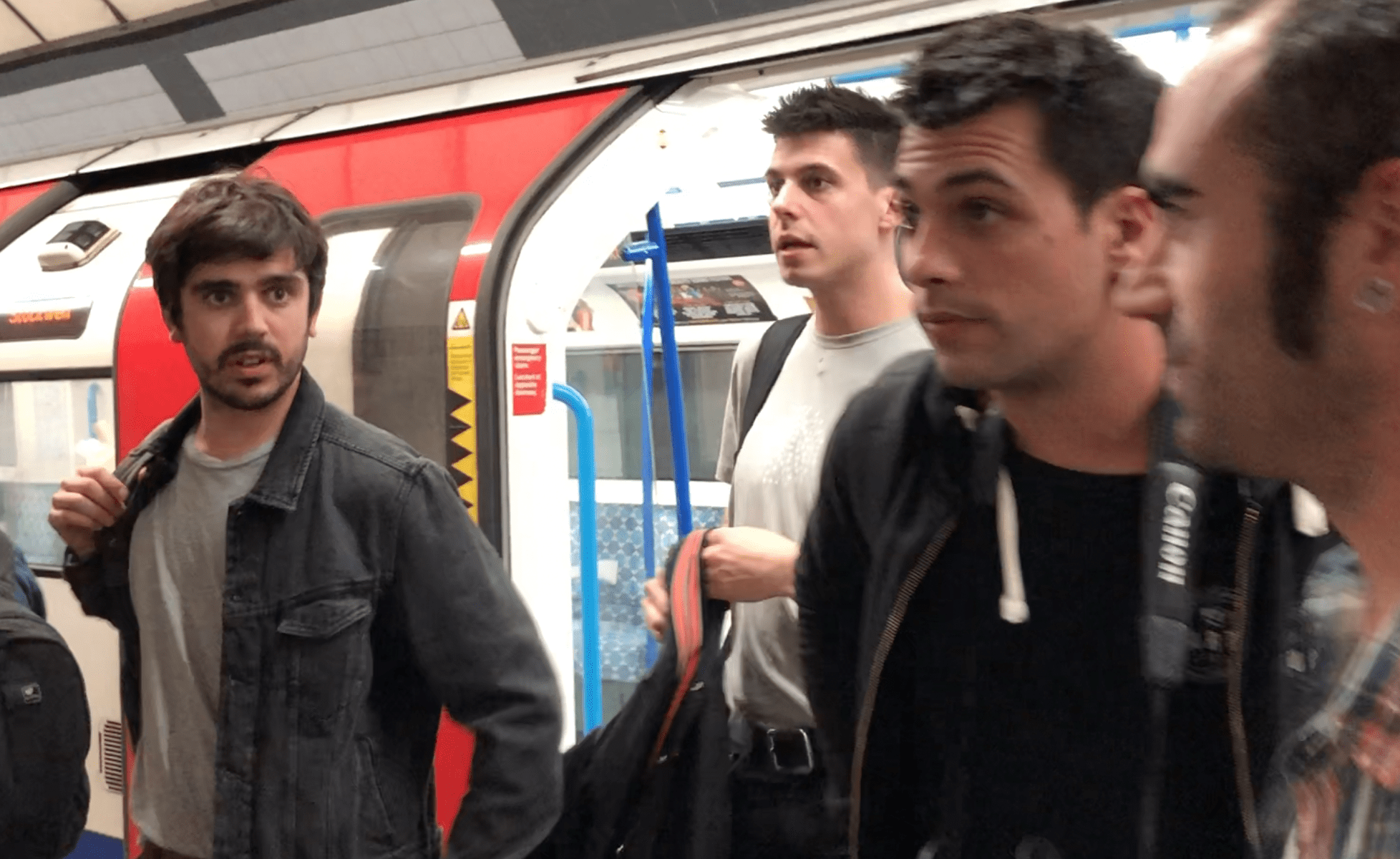 In the dining room at my place, they filmed Pello and me talking a bit more. On my mantelpiece I have a chip of wood I picked up from the ground as a souvenir in Pamplona in 2013 when I was there for the San Fermin festival and also watched a traditional Basque aizolariak (wood cutters) competition. That was a talking point (didn’t make the cut) Another topic of conversation was my reproduction Soviet poster (which did). My interest in Russian and languages provided a way into talking briefly about language blogging and vlogging to camera a little about my language learning and the vlog.

Then the crew got set up in the garden and filmed me filming an interview with Pello for the vlog.

We did a two-and-a-half minute piece in Basque, an extract of which appeared in the show. In that we’re talking about Pello’s linguistic background as a native Basque speaker and whether it’s worth us foreigners learning the language. A short clip of this appeared in the show (and in my own vlog of the afternoon and evening). If you’d like to hear some more Basque, look out for it on the YouTube channel on Tuesday.

Then we recorded a nine-minute conversation in English specially for my YouTube channel (not used in the TV programme). This was the first and only part of the day where we weren’t speaking Basque. I covered some of the same ground as in the Basque interview, but I also wanted to find out more about Pello’s experience as an English learner and learn about his music and TV projects. The interview will be out on the channel on Thursday.

Next, I set to making the Welsh cakes with one of the cameramen in attendance. My kitchen gets is a bit small for more than two people, especially two guys wielding cameras. We decided that Pello should watching through the window.

In the week before the shoot, I’d practised backing the cakes twice, the second time up in Yorkshire under my father’s expert eye. They turned out ok (though a couple were rather burnt, some people like them that way)

We had the Welsh cakes, tea and Welsh whisky at my garden table. First Pello and I (for the shoot), then the rest of the team as well.

They left at about 9.45. I was pretty tired and so were the crew. It was their second full day of filming (of three) here in London. It sounded like they’re working in all the cities on the show in short succession. The Paris show went out as the first episode (with London as episode two). Berlin is coming up next. Then there are programmes from Warsaw, Rome, New York…. 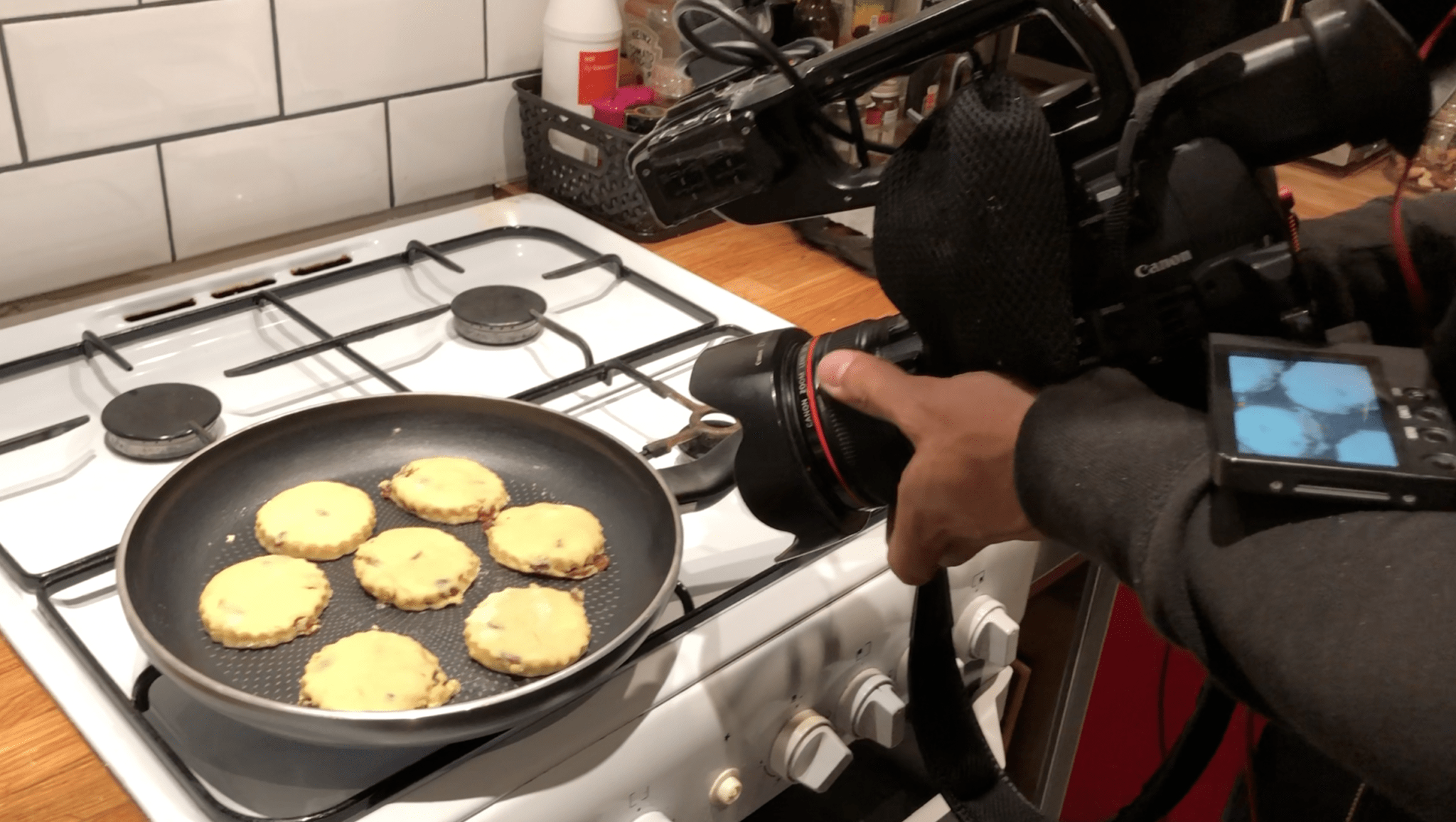 Welsh cakes in the making 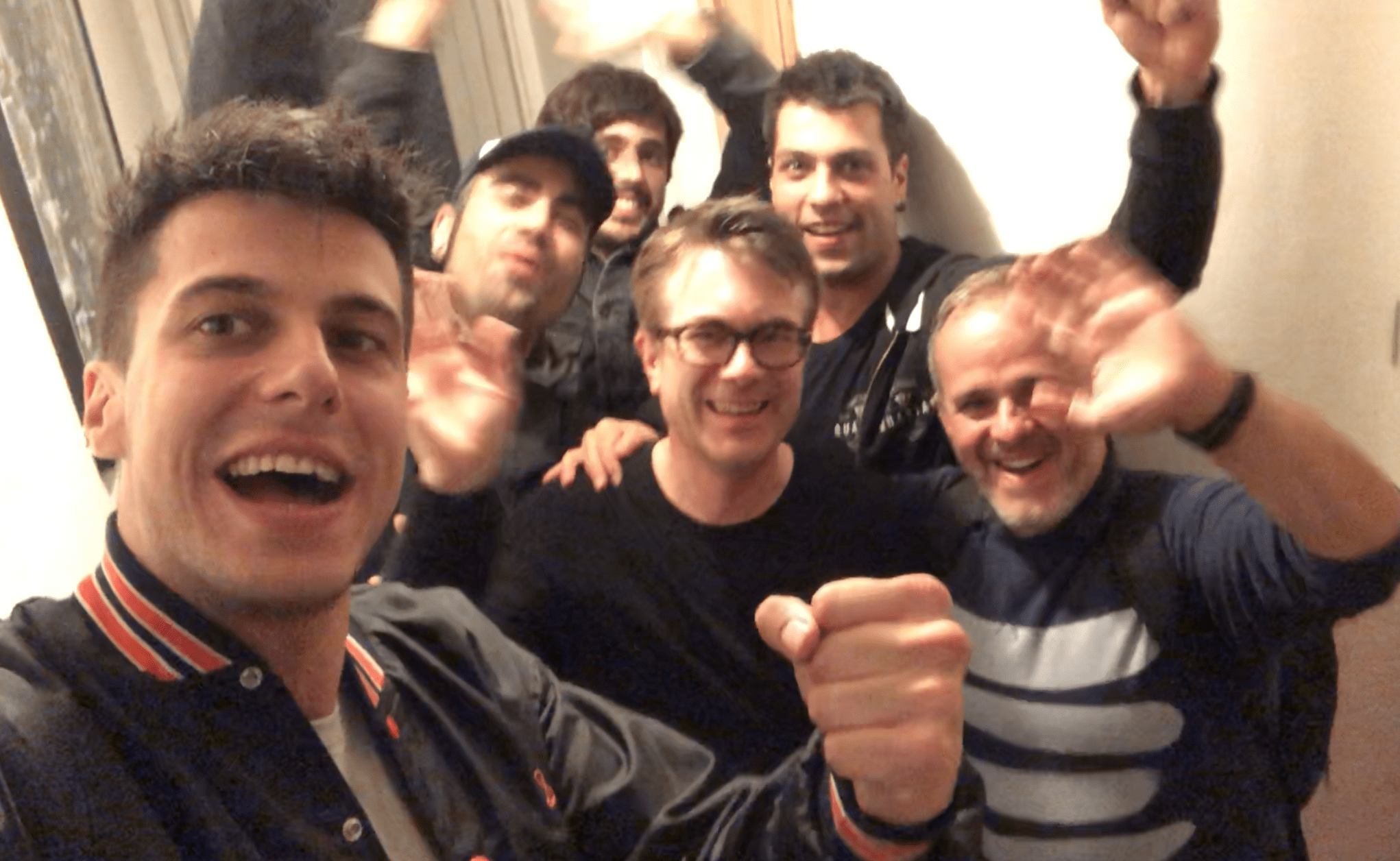 Gero arte! With the crew at the end of the evening

Watching the show: my impressions of the show

Exactly two weeks on from filming day, I settled down in the living room here at Howtogetfluent Towers to watch the London episode live on the EITB website.

The whole show was very enjoyable, with a range of guests. These included a ballet dancer who works at the Royal Ballet, a Basque chef, a Pakistani family whose younger members spoke native-level Basque. The other learner was Daffyd, a US citizen with Welsh/Indian/Australian roots whom I met a few years ago at a London Basque event. Like me, he talked about his linguistic identity and learning Basque and (in his case) his father’s native Hindi. He also played the drums with Pello.

I really liked the way they split my contribution in two. After the introduction, our shoot at Tower and on the boat, was the first segment of the show, about two minutes in. Then, forty-nine minutes in, footage from here in Brixton was the penultimate section.

The weirdest thing for me watching was knowing that the crew were with us just off camera all the time and, of course, knowing that a lot of the polished version is far less spontaneous than it seems.

You’ll get an inside view if you check out the short vlog I’ve done of the afternoon and evening (link at the end of this piece). 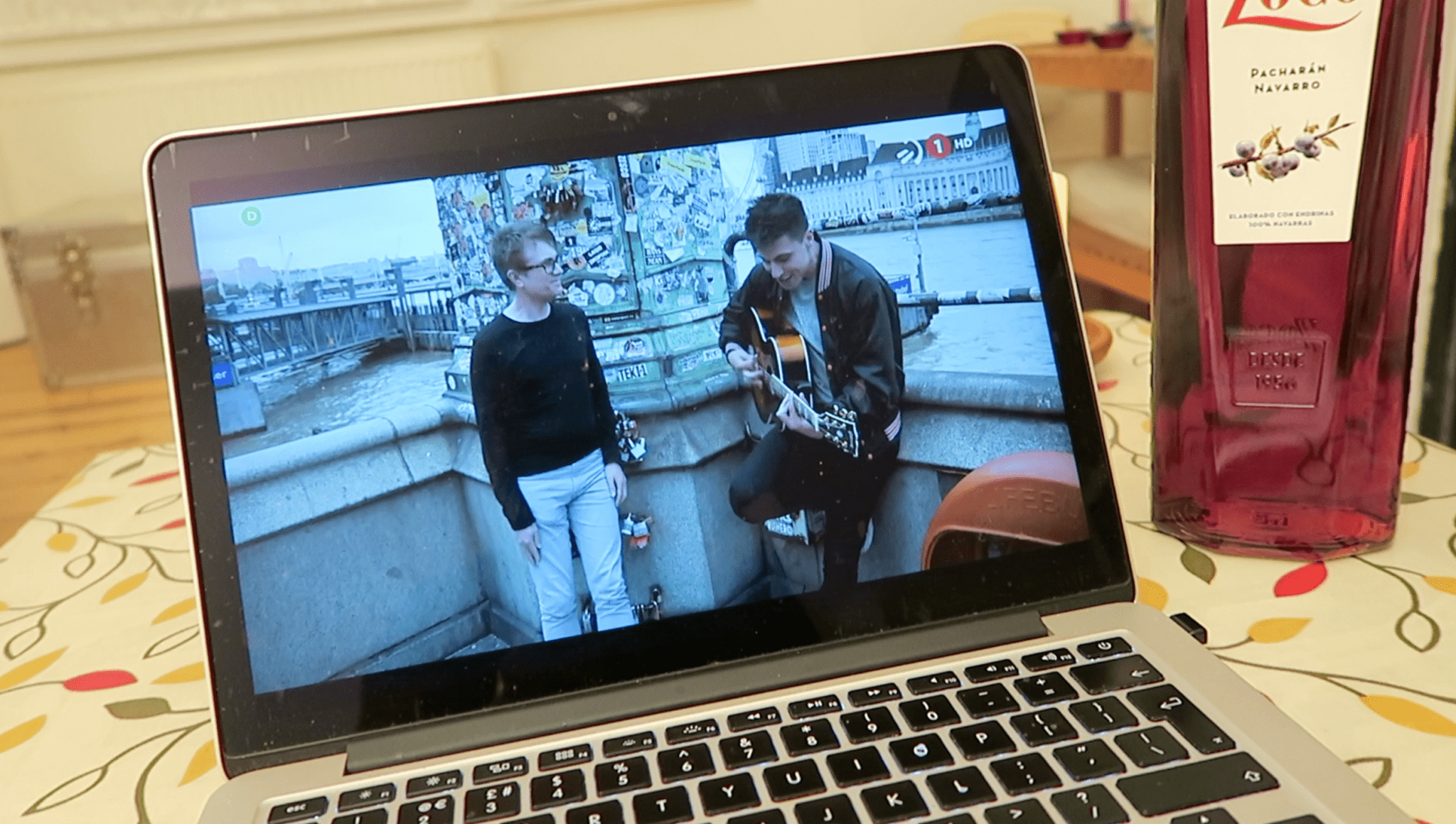 The view from my living room. Watching the show in real time

How was my Basque?

Looking back following the shoot and the broadcast, my spoken Basque still feels very limited but it’s streets ahead of where it was, say, six months ago. Thanks to the clear short-term goal of “Euskalonski”, I’ve done a lot more work at it in the last month than would otherwise have been the case.

This was the first time for ages I’d actually used the language outside a class situation. I sometimes had to ask for a second time what people were saying to me and I made my share of mistakes on air.

All the same, the glass is half full: we did stay in Basque all the time, as we had done at the preparation stage over Skype and in emails.

There’s nothing like showing visitors around London to remind me how wonderful this historic city is, with its majestic river and architecture and its cultural and linguistic diversity.

My participation in the filming of the London episode of Euskalonski made for a memorable afternoon and evening to bring my month’s Basque Boost project to an end. The month may be over but my Basque learning most certainly isn’t.

I can hardly imagine such an opportunity having sought me out through learning a “bigger” language. Never forget that learning a “lesser used” language can sometimes more readily open doors.

The full London episode is on the EITB website, here.

They also made a compilation of my contributions, here.