The Polyglot Conference is an annual two-day event “for everybody who loves languages”. I’ve long wanted to go to Iceland, so I was thrilled when the organisers Richard Simcott and Alex Rawlings announced in Thessaloniki at the end of the fourth Conference that the next one would be in Reykjavík. Here’s a sketch of how it was for me this time in the world’s northernmost capital city.  Well, at least how it was when I wasn’t running around having fun with a camera.  To get straight to the link to this year’s vlog from the Polyglot Conference, scroll on down.

The basic format of the Polyglot Conference in Reykjavik was unchanged from previous years. Two full days of talks and time over lunch and between sessions to talk about a shared enthusiasm and practise the language(s) that you’re learning.

There were also several innovations this year.

One – already the subject on Howtogetfluent of its own short vlog – was the pre-conference crash course in the local language.

Another was a trip out and about the day before the conference. As most of us has limited time in Iceland, this was a great idea.  Though the weather that day was foul.  All the same, two coach-loads of us got to see three famous Icelandic sites. 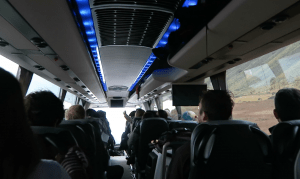 Language coach. All aboard for the pre-Conference day trip.

The first stop was Þingvellir (Þ is the letter thorn – English unvoiced “th” as in “thing”) where Iceland’s parliament first met in 930 and where independence from Denmark was declared in 1944).

Then we went on to Geysir, home to the eponymous water spouts.  We had a great lunch but the sulphurous spurts themselves lacked height (I blame the wind).

Our final stop was the spectacular Gullfos waterfall in a canyon on the Olfusa river. 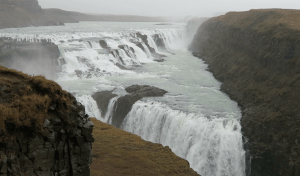 Friday night, damp but invigorated by the bracing Icelandic air, we tumbled from out coaches, straight to the eve-of-conference reception at the central-Reykjavík venue, the Harpa Hall. 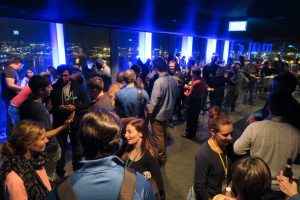 On Saturday morning things kicked off officially with a memorable appearance by Vigdís Finnbogadóttir, a linguist who, as Iceland’s president, was the world’s first ever elected female head of state. 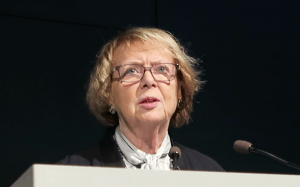 Taking it from the top. “Vigdís” (Icelanders are big on first-name informality) opens the Conference.

Besides the opening and closing ceremonies, there were twenty forty or fifty minute slots. Most of the time there were two tracks running in parallel in neighbouring halls.

Some people like to sample a few and spend the rest of the time meeting new people, catching up with old friends or networking. I do that in the breaks and the evenings but like to see as much of the formal programme as I can live (though speakers are videoed for the Conference’s YouTube catch-up channel).

Thus I attended nine talks and (another innovation) the two end-of-day panel discussions. 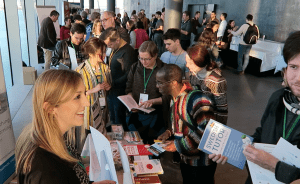 The trees are dead, long live the trees!  Lots of interest in publishers’ latest offerings during a break between sessions.

From my choice, a theme that emerged was the richness of multi directional influences on language development.

So, Johan Vandewalle “Turkic languages, Multilingualism and Polyglottery” showed how this great language family has, over the centuries, been influenced in various ways by the languages around it. We’re not just talking about the vocabulary borrowings.  Ottoman Turkish was written in the Arabic (and even in the Armenian ann Greek) scripts.

At a personal level, Yanjaa Wintersoul expressed the cross-currents with passion. In “Mastering Mongolian as a Modern Nomad”, she told her fascinating individual story. As a little girl she moved from post-Soviet Mongolia to Sweden, learing English and Swedish along the way. 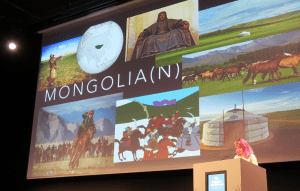 Who said northern winters were grey? Yanjaa collects the prize in the “Most colourful presentation (and presenter)” category.

The session somehow managed to include a quick Mongolian lesson and Wintersoul told of her current engagement with attempts to revitalise her grandmother’s native Buryat (spoken in Russian Siberia along the border with Mongolia).

With 265,000 speakers, Buryat is in the same ballpark as Icelandic (330,000), though Buryatians, like speakers of Irish, Breton or Wales (all with far more speakers) would look in envy at Icelandic’s majority status and the uncolonised confidence of its speakers.

Even Icelandic, though, is feeling the pressure of the technological revolution. This came out in Rob Painter “Can ‘Small” Languages Survive in the Age of Texting”.  It’s never been easier for small languages to have a “huge megaphone” but attitude is the key to success.

Confidence in the language’s future from its speakers and an appreciation of the value of linguistic diversity in the wider public consciousness.  With the latter the “Polyglot community” can help.

Another threat is mass tourism as Iceland has become “hip”, explained Kristín Jónsdóttir in “The Icelandic Culture Boom: Threat or Asset”.  Like Painter, she stressed the importance of a strong presence for the language in the new communication technologies.

My visit to Iceland was certainly (mildly) spoiled by the sheer number of (other) tourists.  I could really do without the ubiquitous gaggles of entitle British school children, well-behaved though the large group on my plane out, and the separate large group on my plane back, undoubtedly were.  What will they have to look forward to?  I digress….

As you’d expect, there was much on the programme about language learning.

Guðrún Theodórsdóttir spoke of the “Icelandic Learning Village” a programme to help learners use the language. It was great to see this innovation.

Despite sterling work such as this (and the Arni Magnusson Institute), I got the impression that Iceland lags behind the Basque Country or Wales in teaching the language to adults (to start with, there’s the outrageous price of the limited number of textbooks and dictionaries). With a langauge in rude health and (previously) off the beaten track, there just wasn’t the need to focus on winning converts. 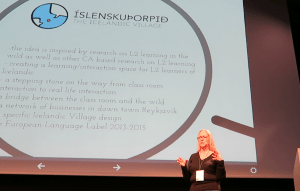 My Icelandic teacher Sigríður Kristinsdóttir gave a joint presentation with her more famous (and successful) pupil, the author Daniel Tammet. I’d heard him speak (equally engagingly) in London a few weeks before.

Tammet’s synaesthesia gives him certain “superpowers” such as an ability to associate language with numbers which mean that some of his message is of limited practical transferability. Some of it, though, we can all apply: looking for patterns; a playful, creative approach with more focus on the journey than the destination.

Speaking of brains, a standout talk for me was Thomas Bak‘s “The cognitive Effects of Language Learning”. Monolingualism is a “Zivilisationskrankheit” (a disease of civilisation). You’re never to old to learn a language.  Knowing more than one language really can delay the onset of dementia.  It can speed recovery after a stroke, too.

The brain, we increasingly understand, is not a limited resource (like a chest with draws for separate functions). Rather, there’s a “dynamic localism”. Neuroplasticity is the name of the game. Certain areas of the brain specialise, but others can step in with the same function when necessary. You’re never to old to start learning and it’s good to learn new skills on a regular basis. 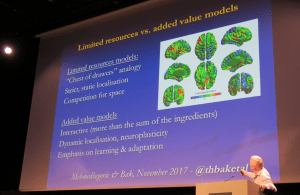 Not so grey matter. “Here’s one I sliced up earlier”, explains neuroscientist and linguist Thomas H. Bak.

On Saturday, Alexander Arguelles chaired a discussion on the relationship between polyglot at academia. (The end of day panels were something else new this year.)

Speaking several languages should be an asset, but it’s less common that it was in linguistics and language departments.  In universities the skill can be under appreciated and seen as not serious. Chomskyan linguistics was held partly responsible as “the perfect linguistics for people who hate languages” (Professor Bak).

If you want to do research among faculty who love languages, look for departments where people have done fieldwork and who publish papers on specific topics on (or even better, in) a specific language (Rob Painter). 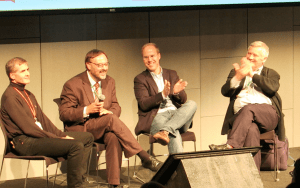 A “No English” zone was something else tried out for the first time (borrowed from the Polyglot Gathering in May). On this hallowed ground, people could try out whatever (other) language they liked, free of the fear of defaulting (or feeling pushed) back into English.

Most of the time, I was in a different “zone” (vlogging). That said, I was a bit more assertive about not speaking English. I used French, German, Russian, Welsh and a bit of Basque….and – but of course – my beginner’s Icelandic. 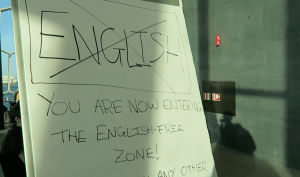 Out of the shadows. My name is Gareth and I’m a native English speaker.

For all the packed programme the star of the show, in a sense, was the venue itself. The new Harpa Hall stands right on Reykjavík’s Old Harbour and you can look out to hills over the bay. The glinting glass made for an especially atmospheric backdrop: come late afternoon, a photographer’s dream. 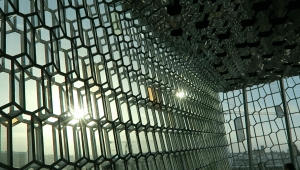 Lightfest. Iceland is bright in winter because it has two suns.

The final act of the Polyglot Conference in Reykjavik was the announcement of the location of next year’s Conference: Ljubljana, Slovenia. The dates are 6-7th October. 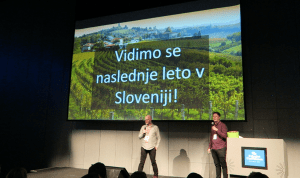 Vinyardies Richard Simcott (L) and Alex Rawlings announce the location of the next Polyglot Conference.

For now, as a memento from Iceland and a taste of things to come, here’s that vlog:

Vlog and review from the Polyglot Conference Thessaloniki

My first ever vlog, from the Polyglot Conference New York