Shadowing is a deceptively simple, little-known language learning technique. You take a native audio recording, with a transcript and you speak along at as close to the same time as you can. That’s it.  Shadowing is sometimes recommended to trainee conference interpreters, which suggests that it’s a well-serious method, worth closer investigation. In this article we’ll look at the benefits claimed for shadowing and different ways to do it. I’ll give you some practical tips and point out one pitfall you need to be aware of.

What are the benefits of shadowing for language learning?

I haven’t yet found any scientific research on the effectiveness of shadowing but its proponents in the interpreter and language learning communities stress several benefits.

First, it’s said that shadowing helps you practise the pronunciation of individual words and phrases.  Shadowing gets your mouth muscles moving as you train on language that you know is correct.

The pronunciation practice aspect includes connected speech. That’s how – in the flow of real speech – individual words are compressed or merge into words that come before or after.

Second, shadowing is said to help with the melody of phrases. If you shadow well, you’re not only pronouncing the words correctly. You’re also using native intonation to freight your speech with the correct emotional load.

This is important because intonation patterns differ between languages. It’s not just what you say, but the music with which you say that makes for (mis)communication in your target langauge.

As a secondary benefit, shadowing could also help you reinforce vocabulary, collocations and structures that you already know, when used as part of a wider study routine.

True, shadowing may not be as effective for imprinting the language into your long-term memory as independent production and recall in a language are.

Even so, any form of repetition is going to help you to some extent and shadowing is a lot more than blind repetition.

It also has the potential to help you learn new stuff, as it’ll flag up new words, phrases or structures that you don’t yet know. 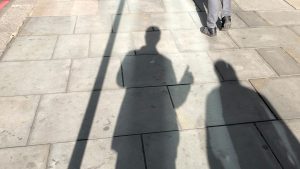 A warning and tips before you start

Here’s the pitfall: if you’re not careful, especially if you’re a beginner in a language, shadowing could ingrain pronunciation mistakes.  The risk is that you mishear sounds and reproduce the nearest familiar sound from your own language.

When shadowing, you’ll usually be working with a text as well as audio. So, if your target language is written in the Latin alphabet, you could, double up the mistake by imposing the sound value English gives to a letter to that letter in your target language.

Remember, then, that shadowing is a supplement to more fundamental work on pronunciation and accent.

When you’re beginning with a language, you need to focus on individual sounds, syllables and words, without the pressure of pace that shadowing involves.

Ideally, you’ll be getting corrective feedback from a native speaker and checks at various stages of your language learning journey to work on sounds that you’re still not getting right.

As long as you really are getting the right sound, shadowing gives you an opportunity to practise the physical feel of articulating your target language. It can help you training up the new moves your mouth needs.

Though shadowing is a simple technique in theory, you may need a little while to get the hang of it.

Even once you know how to shadow, it can get tiring. After all, you are reading, listening and speaking at the same time and so need a high levels of focus.

It gets easier with practice, though.

When you’re staring out, work with a short audio recording of a minute or two (and the same content transcribe, about an A4 page of double-spaced text, maximum).

You can work with the text several times or alternate texts. Maybe aim for sessions of ten or fifteen minutes shadowing a time.

For your first time ever, you could start with run through of the method with recording and transcript in English or your mother tongue (if different).

Armed with target language audio recording and transcript, you may not want to throw yourself straight in at the deep end with a whole text, non-stop in your target language.

No worries. You can train yourself up in stages.

Take your recording and listen to the whole thing a few times without straining, to get a feel for the soundscape and content.

If there are things you don’t understand, use the transcript to help you identify the words or phrases and look up the vocab or grammar, if you need to.

Work phrase by phrase. Whether you have the text in front of you or not is up to you. It’s obviously easier if you do, though.

Once you’re ready, you can do some real shadowing: speaking along with the recording as closely to simultaneously as possible.

Let the audio dominate your senses, really “lock on” to the native voice(s), even though you’re also following the text in written form as you go

If you come across a particularly difficult phrase, you can still use that pause button. When you resume, though, stay simultaneous.

The hardest version is to shadow without the transcript.

If the text is new, this is obviously only going to work with a slightly longer delay of a second or two (and, unless the text is a good way below your level, probably only after a few listens through and checking of words).

If the material is very familiar to you, with experience you may be able to achieve approximate to the same level of synchronisation that you achieve when the text is open in front of you.

Shadowing is a physical thing.  It’s not only your mouth that should be put through its paces.

Professor Alexander Aguelles, whose YouTube videos have helped make the method better known in the language self-study online community, likes to shadow not just standing up, but moving about.

He illustrated shadowing in this video on his YouTube channel.

It’s not significant that he’s going backwards and forward across a small footbridge. That’s just so that he stays within range of his camera.

Don’t mumble. Try to articulate loudly and clearly (while also trying to reproduce the music of the text). This will help shape your mouth.

A bit of theatricality won’t go amiss. You’re playing a part, after all.

Ways to use shadowing in your language learning

As we’ve seen, while shadowing can help with understanding and memorising words and phrases, it’s mainly about accent, intonation, remembering.

So, if you’re using shadowing to work on accent and intonation, work with material at or slightly below your current level. Take the reinforcement effects of focussed repetition of the vocab and grammar as a useful side benefit to help you with the “over learning” that we all need to do.

If you’re learning new stuff, one way of using shadowing would be as your first approach to a new text. Be comfortable with your lack of comprehension. Look at shadowing as a way to get you intrigued, primed before you start working.

More effective, though, could be to finish off with some shadowing, after you’ve pulled a text apart and studied unknown grammar and new words and phrases.

Which texts to use for shadowing?

If your textbook has audio to go with some of the texts, this would be an obvious place to start. You’ll be sure that the material is at the appropriate level.

Good textbooks usually have a lot of dialogues. They offer you the sort of two-way exchanges with natural breaks that could work well for shadowing.  These sort of conversations are probably how you’ll want to use language in real life (well, minus the ums and ahs, false starts, stumbling and repetition of real life speech).

Another source of good conversations is podcasts with transcripts, either for learners or – once you get to upper intermediate and beyond – podcasts aimed at native speakers.

An alternative if to get an audio book plus a copy of the physical book itself.

You might find a recording of a play or film online and get hold of the script.

To develop good listening skills, you need to be familiar with a wide range of accents.

Remember, though, that shadowing isn’t about listening skills.

With a textbook, you can be sure that the voice actors will be relatively neutral.

If you’re straying further afield in your choice of source material, you may find it better to stick to accents that are similar to the one you’ve decide to adopt in your target language.

Don’t pick the audio of a play set in deepest Bavaria, for example, unless that’s the kind of German you want to speak. 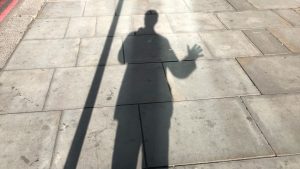 Making your own materials for language shadowing

If you have the text but no audio you could ask a friend to record it for you or pay a native speaker to do so.

In the same way, if you have a recording but no transcript, you could enlist somebody to help you make one.

Better still, first of all try to make your own by doing an impromptu dictation exercise with the audio and have it checked.

Where can you find help with the audio/transcribing for you?

You could ask a native speaker friend.

Alternatively you could ask your teacher to help you with this during lesson time or do the extra work for you at a different time.  If your teacher isn’t able to help, try approach an additional teacher on italki.com.

Another option (especially for the more common languages, is to check out a site like upwork.com where you can find many freelance wordsmiths who do transcribing).

Give shadowing for language learning a go!

Remember, shadowing is intended as a supplement to other techniques.

There are no magic bullets in language learning.  Shadowing won’t help directly to turn you into a spontaneous, fluent speaker.

What it can help with is accent and intonation. As part of a wider study routine it can also help with grammar and vocabulary learning, more particularly, with consolidation.

Maybe give it a try for a couple of months and let me know in the comments below how it goes.