Reading in your foreign language can bring real benefits, even if your main goal is to speak. That was my argument in article that kicked off this series on reading and…my view hasn’t changed 🙂  What, though, if you’re struggling to read in a foreign language? Here are three tips that will help smooth the way.

You started learning French because you wanted to read Proust? It got too difficult?  So, you gave up and started to learn Russian to read War and Peace in the original……I bet that didn’t last long either.

Ok, I’m exaggerating. I’m sure you were much more realistic in your initial aims (even if I am not!). 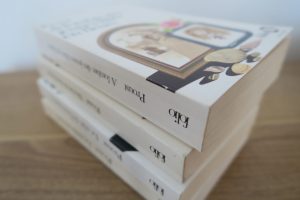 Let’s take a step back.

For starters, as we saw in the preceding post in this series, it’s best to read materials at your current level. Or, for a bit of a stretch, you can choose something just slightly above where you are.

How to you know how hard reading material is, though? Usually, by reference to one of the langauge attainment scales, such as the Common European Framework of Reference for Languages.

Whenever you can, find “graded” material, at your level. Your textbook is an obvious source. Then also look out for “graded readers” with original or adapted material that you can cope with.

I remember in my English literature classes at secondary school, we all had to choose a novel to read and write essays on. We were all in our mid-teens and most of us were not really into reading.

As a result, George Orwell’s Animal Farm was a very popular book to choose. Why?  You guessed it, it was one of the shortest novels in the school library. 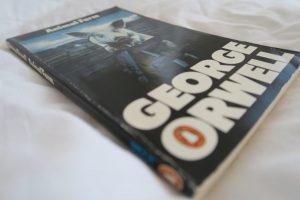 You can take the same evasive action in your foreign language and with your head held higher than ours were back in that literature class.

Reading in a foreign language is a demanding skill which requires a lot of practice. So, start short. The advice is all the more important if your language uses a different writing system. Chinese and Japanese are the hardest here, because their writing systems deviate the most from the Latin-based alphabet system that we use.

Graded readers will often consist of collections of short texts, sorting the problem from the outset.

As you move to native materials, let the level rise but keep the length under control.

Now, if you’re ready to tackle native-level Russian, there’s nothing to stop you tacking War and Peace chapter-by-chapter but how about starting with Checkov’s short stories, instead? 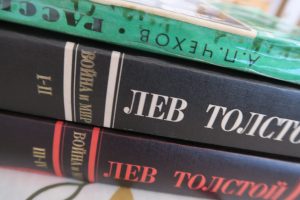 If you’re launching into native material, you may decide to wait a while before you tackle creative literature at all.

The clue’s in the name: “creativity” in the use of language is often part of the game. For this reason, be extra careful with poetry, where each word is most laden with meaning.

Instead, when they’re starting to read native-level materials, experienced language learners often prefer articles from a newspaper, magazine or website.

Look out for graded articles too, either in learner magazines or on learner websites.

Another good half-way house may be factual sites for children or teenagers.

Articles don’t just have their brevity to recommend them. They’re also likely to have a clear structure. The classic beginning, middle and end. The end may be a wrap-up summary or a punchy conclusion, either of which should help you to be sure you’ve got the drift.

Also, if there’s a clear structure or argument, could be the basis for a discussion or an attempt to recall actively.

I have a hunch we’re more likely to re-read something self-contained, too.

To complete a short-self-contained piece can also often feel more satisfying. You achieve some sort of closure, which is another argument against a long novel chapter-by-chapter. I suppose the counter-argument is that the cliff-hanger ending in a page-turning story could leave you eager for more.

Read on topics that interest you

When you’re at the highest levels, there’s a good argument for forcing yourself to open up new topics in your target language and read about things that you wouldn’t normally be drawn to.

As a general rule, though, especially at the lower levels, read things that interest you.

She identified haivng too small a vocabulary as one of the reasons that reading can get boring. “The more our curiosity is satisfied, the less we need discipline to get through the deadlocks”.

When you’re still learning the most frequent vocabulary and essential structures of the language, there’s a lot to be said for keeping the material in your coursebook centre stage. This means you’ll be introduced to new topics and structures in a systematic way. Skip ahead and double back, but let the predetermined order of the chapters be your guide.

It’s also worth gathering together a bundle (whether physical or digital) of level-appropriate supplementary materials very early on in your language learning journey. Have it to hand to supplement your coursebook.

Read things that you already know in English or another language

How about already knowing “the story” as a method for reading in a foreign language? This has the potential to help ease you in to extensive reading in your language

For centuries Christian, language scholars and enthusiasts have used the technique of starting off with the text they knew best: the Bible. They might take an “intensive” reading approach: comparing and pulling apart each sentence in detail.

Another traditional favourite source of familiar reading material has been classics of secular literature. Lomb reports that Lajos Kossuth learned English in an Austrian gaol from sixteen lines of a Shakespeare play.

You could obviously take this approach with another religious or classic text of your choice.

Just try to get a contemporary translation, unless you want to sound like the bible or Shakespeare! When I was on my intensive summer course in 1988, an Australian who had only read the bible.

In many language, simplified “children’s versions” of classic texts are on sale. You could give one of those a try.

Familiar works created for youngsters have their adherents among my language learning friends, too.

Antoine De Saint-Exupery’s The Petit Prince seems to be popular. Maybe that’s because it’s relatively short and because it’s significant and touching.

Harry Potter is another text currently beloved by language learners.

As I said when I bought my (as yet still unread) copy in Basque a few months ago, the magical references may not be the easiest.

That takes us back to tip two, though: interest can pull you through.

Paolo Coelho is often mentioned among contemporary adult-authors, thanks to his fairly simple style and the wide availability of translations.

You could take the opportunity to explore something new from the literature of your target country by starting with an English translation of an author you don’t already know and moving on to the original.

It would be one of your paths into your new culture.

Published “parallel texts” are one accessible way to follow reading in translation with reading in the orignal (or to work the other way). Just be aware that the translations may be quite creative translations of the underlying meaning and don’t let the temptation to check constantly spoil your flow.

Have you already tried out any of these approaches? What texts did you choose and why? How did it go? I’d love to hear your experiences and views in the comments below.

Check out the other posts in this series on reading:

Part 1: How important is reading for learning a foreign language?

Part 2: How to read in a foreign language: the skill unpicked

Part 3: Reading for fluency…and pleasure in your foreign language

Part 6: Reading in a foreign language. Enough of stories? Time for the facts?