“H2GF at Large” is back, this time with a vlog from the 3rd Polyglot Gathering.  The film has been strewn across the cutting room floor here at Howtogetfluent Towers since I got back from Berlin (quite a few weeks ago) but now….(drum roll)….here’s the vlog.

It was actually at the 2nd Gathering, last year, that I decided it would be fun to have a go in this medium and I remember quizzing the Queen of the language vloggers, Lindsay Dow of Lindsay Does Languages, on how you do it.  She very kindly talked me through some basics.

One piece of advice I wasn’t given, because it’s too blooming obvious, is don’t turn up with your camera but without a spare battery and charger.  I had to make an emergency foray to Media Markt Alexanderplatz with podcaster Kris Broholm to re-kit myself out.  Kris had forgotten the memory card for his recording gear.  Pros, eh? 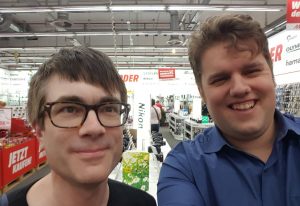 I’ve footage here of Kris making his speaking debut and, near the end of the vlog, he has a go at my “German Pronunciation Challenge”.  That’ll be my next video offering, filmed at the Gathering in parallel with this one.  Watch this space!

Lindsay takes my education further by introducing me to Snapchat, nay, making me a subject of said medium.  Being a bit crusty I’m not sure that I’ll be getting into that one with quite the same enthusiasm but never say never (except in relation to Morris dancing and cricket).  See if you can spot Lindsay at work with her camera for her vlogs from the event which all appeared, erm, somewhat more contemporaneously than mine.  Hey ho, let’s say that my late offering is a way to keep the memory alive. 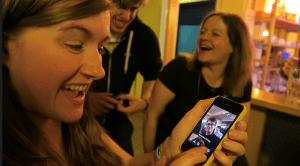 That’s one personal reason for vlogging, the pure pleasure of recollection.  I hope that those of you who were there get as much pleasure from revisiting as I did during the editing.

I don’t dwell on the content of the talks here.  I shared some of the things that made an impression on me in my review post and you’ll be able to watch talks of your choice in full when the Gathering publishes the videos on its own YouTube channel.

What I’ve tried to do instead is to convey something of the rich variety of activities and personalities and a sense of the atmosphere, the excitement and some of the fun.

Among other things, look out for:

….and the absolute best reason for learning German.

If you weren’t there, I hope you’ll feel like you almost were afterwards.  Maybe you’ll even want to come yourself next year.

If that’s not practical for you (and you can’t make it to the Polyglot Conference this autumn either) how about seeking out language learners’ meet ups near where you live?  Have a search on Facebook or meetup.

After all, community is one of the key things that helps so much with any long-term endeavour like learning a language.

Remember, the Gathering – and the Conference – are events for all who are learning one language or more.  You don’t have to speak a whole list of them.

In my latest spectacular high-tech leap forward, I’ve managed to add a YouTube link at the end of the vlog.   If you enjoy, please share and subscribe to the H2GF YouTube channel.  Here goes: