My experience preparing for the writing paper of an advanced Russian exam was a comedy of errors.  It threw up a lot of mistakes connected with the differences between how Russian sounds and how it’s written.  They’re the mistakes of somebody who has spoken and listened to vast amounts of the Russian over the years, but hasn’t had nearly as much experience writing Russian.  You may be an intermediate or advanced Russian learner with a different history.  You may be an elementary learner.  All the same, I’ll bet that you’re making some of these mistakes too.

In this half of this post, I flag them up and think about what’s causing them.

In the second half, it’s solution time.

If you’re of a delicate disposition, get yourself a cushion to hide behind for the coming freak show or, pour yourself a shot of vodka. 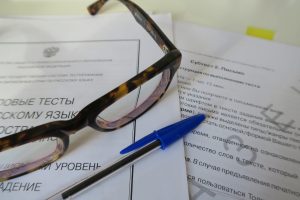 A taxonomy of errors

A victim of the vowels?

Writing the wrong vowel has become one of my specialities.

I often got the two Russian “i” sounds mixed up.

Russian has the front closed vowel “и” represented by [i] in the International Phonetic Alphabet (like the e in English “easy”) and the middle closed vowel ы [ɨ] which is formed further back in the mouth.

Mistakes I made included writing *развязиваются (the *s here indicate an incorrect word) for развязываются and *музикантов for музыкантов.

I think the cause of these mix-ups is partly that my ear is not so well tuned to “ы” [ɨ] sound.   It doesn’t exist in the English sound system, yet, to the native ear, it’s clearly distinguished from “и” [i].

There are other vowel sounds which are written with different letters but which sound very similar even to native Russians. I’m talking about the vowels that are “reduced” if they are not stressed.

I wrote *оснaвном for основном, *парошок for порошок.  That’s an understandable mistake as the unstressed “o” sounds closer to an “a”.  Yet I also sometimes wrote “o” where “a” was needed: *возрoст for возраст, *озобочены for озабочены.  I had a gruesome *стoлкoвать for сталкивать.

I wrote *преодолить for преодолеть. Here I maybe the cause wasn’t sound.  Maybe I just went with the more common ending infinitive verb ending “-ить” instead of “-еть”.

Just because the vowels were giving me some grief didn’t mean that the consonants felt like cutting me some slack.

Sometimes, I left consonants out: *чуствует for чувствует.

Other times, I got just got the wrong consonant: *выпустник for выпускник, ближко for близко (maybe I was mixed up with ближе).

A common confusion was between “c” or “з”, especially in suffixes: *изтекать for истекать, *безплатно for бесплатно.

The main consonant problem by far, though, was the distinction between soft (palatised) and hard (unpalatised) consonants.

This is a very important phonological distinction in Russian.

Othertimes, I was carpet-bombing my written Russian with soft signs: *четырье for четыре, *испольнитель for исполнитель.  I could go on….and on… 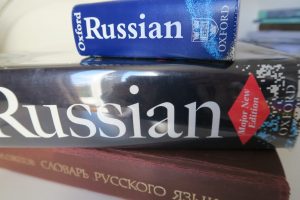 I also have a nice line in non-existent hybrids and other such deformities.

It all started back in my student days (that’s back in the period shortly after Old Russian emerged from Late Common Slavic).

I remember causing amusement to my Russian friends by calling an alarm clock *разбудник. This was my patent derivation from разбудить (to wake somebody up). I should have said будильник.

All this time later, I’m as creative as ever.

If you don’t study Russian, you need to know here that Russian verbs usually come in pairs: the imperfective “aspect” of a verb (often used for repeated or habitual actions) and the perfective aspect (which often puts the focus of the same action on the result rather than the process).

They’re usually rather similar, though.  There are patterns to the pairing, ripe for misapplication.

Wrong! заботиться is imperfect in the first place (the perfective is озаботься).

I also came up with *стремляться as an impefect, extrapolating back from стремиться (already imperfective – there’s no perfective).

My juices can flow in the other direction too: from an imperfective to a “false perfective”.  I wrote *брызгнул as a prefective.  I should have written брызнул. I think my memory had produced a hybrid with the imperfective form брызгать.

Othertimes, I got the root right but forced the verb screaming and kicking into the wrong group (each Russian verb belongs to one of two groups (conjugation patterns): *минился for миновался. Mmmm. So near, yet so far.

Several times I messed up loan words which are very similar to English, but not quite the same: *идентитет for идентичность, *автомизация for автоматизация.

Another tendency was overuse reflexive verbs. Sometimes for no reason at all, otherwise because I was confused about when to use the reflexive ending “-ся”, “-сь” and when to use a form of the reflexive pronoun себя. In English often both “myself”, “oneself”, “yourselves” etc: *позволиться for позволить себе.

Writing practice unearthed some fossilised mistakes that I’ve no doubt been assaulting Russian ears with for years: *проблем in the nominative singular instead of проблема, дешевлый for дешёвый. *Брач was my version of врач. 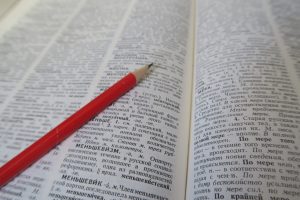 What is to be done?

While preparing for the exam I did lots of writing and had my teachers correct it. That way, I became more aware of such mistakes and greatly reduced their number.

Yes, it was a downer to see red lines going through my work, but hey, better then than in the exam!

Before and since the exam, I’ve been thinking a lot about other specific steps that I could take to improve in these areas.

One thing I’m going to do is refocus on the differences between the Russian and English sound systems.

In particular, the two Russian “i”s (и and ы) and the distinction between hard and soft consonants.

I’ve never turned to a pronunciation trainer to get help with the finer points of pronunciation.  I’m going to look into it.

Whether or not you can afford extra work with a specialist here, you should be spending time with your teacher or language exchange partner to get the sounds right in your spoken Russian.

You could record yourself either having a conversation or reading something out loud.  Then have your teacher critique your sound and work together on the biggest weaknesses.

Focussing on the unphonetic aspects of Russian spelling

Perfect pronunciation won’t help with those mistakes which stem from instances when Russian isn’t written as it sounds.

Russian spelling is generally phonetic.  Still, there are some divergences between how a word sounds and how it’s written.

Be alert to the difference between stressed and unstressed vowels, which is not reflected in the spelling system.

Also be aware of other changes that the orthography doesn’t show, for example :

These and other changes are explained in detail in Terance Wade, A Comprehensive Russian Grammar 3rd ed, p. 15 (citations of “Wade” below are to this edition)).

Some of my mistakes in these areas are actually made by native speakers too. I take some encouragement from that!

Getting on top of the spelling rules

How about dictation exercises as a way of dealing with the non phonetic aspects of Russian?

I’ve never used this method in language learning. A couple of generations ago, it used to be used a lot for less advanced learners but is now out of fashion.

At advanced level, we’ll understand everything we hear.  The point is to get the spelling right. 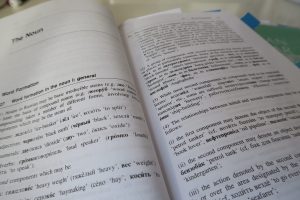 Thinking (twice) from what you know

At times, I was just too creative in my word formation (morphology).  I traced back those “false imperfectives from already perfective verbs, for example.

All the same, there is more scope to “think yourself correct”.

Rather than working from the “maybe to the “wrong”, I’d have done better with my morphology to work from the “known to the unknown”.

So, I wrote *преодолить for преодолеть. If I had tried conjugating in my head, I would have known that the first person is преоделею and, so, first conjugation.

In the same way, thinking more about the meanings of the prefixes and suffixes would sometimes have helped.

It would be worth going back and looking at examples of prefixes which are close in form but different in meaning:

In contrast, пре- signifies trans- as in преобразование or excess (hence *преувеличивает not my *приувеличивает).

With growing experience and understanding we should be able to work a lot of this out on the hoof from first principles (though granted, not necessarily under the time pressure of a written exam).

Further in this vein, for me, and maybe for you, the time may have come for a more conscious study of Russian word formation (morphology).

One approach is “roots” and “braches” – breaking down words into their most basic components and understanding how certain classes of word are derived from others.

This is the approach taken in an older intermediate textbook, Charles E. Townsend’s Continuing with Russian (Slavica, 1980)(pictured below). 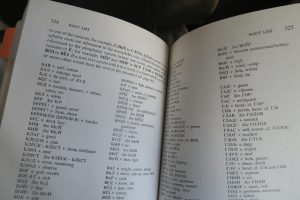 So, take, for example, the formation of nouns from verbs.

As well as word formation, another angle is to look at the frequency distribution of word forms.  On this, Wade has a lot to say.

For example, we can learn that most verbs ending in -ить are Group II except monosyllabic infinatives and почить (to rest) and compounds of -шибить (Wade p. 241).

I wrote *прекрасний for прекрасный but Wade tells me that “soft ending adjective commprise some forty adjectives in -ний and the adjective карий hazel (eye colour)” and that these are mainly adjectives of time (весенний, давний) or location (верхний, домашний)(Wade p. 170-1).

The workbook available with Wade’s Grammar provides a chance to engage in controlled practice of much of Russian grammar. It does not cover all aspects of word formation in detail, though.

I’m now looking for supplementary books (recommendations gratefully received in the comments below).

It is very hard core set of exercises over 364 pages, including loads on morphology.  There are no answers and it’s very dry. It is also very thorough. There’s more than enough to keep an advanced student (and a teacher) busy for a very long time. 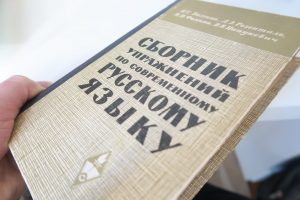 Doing lots of writing practice and getting corrective feedback made me much more aware of about the types of mistakes I’m making.

The experience of making the mistakes means that I can to the detail on specific rules and patterns in a book like Wade’s and the relevant points now stand out and speak to me.

If I was just trying to study the book without mental “hooks” born of painful experience, I’d be unlikely to remember much and would quickly feel overwhelmed.

This deliberate, conscious, balanced approach seems to make sense as a way forward.

I’ve shared my list and my remedies in the expectation that you will have some of the same difficulties and that my remedial suggestions might make sense for you too.

Then again, perhaps what you’re finding difficult is something different?

Let me know in the comments below what your battle scares are how you’re preparing for the next push forward. 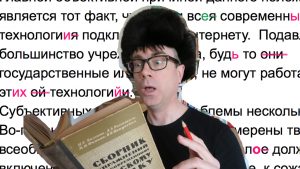