After my five-day project to learn some basic Indonesian came to an end, I had almost two days left in Yogyakarta on the island of Java to explore.  The highlights were the Prambanan temple, the sultan’s palace and Berinharja market.  Here’s my final “on the road” report and video.

On Saturday morning I went on the back of a motor bike to the Hindu temples at Prambanan.  We whizzed down back lanes and through small villages, past paddy fields and banana trees.  There were Mosques, many village food stalls, bamboo and rice out to dry.  I was also struck by the number of carpenters’ shops.  One bridge was being raised so that the next flow of larva from the Merapi volcano does not sweep it away (unlike the last in 2010).

The temple compound was just as impressive and well-organised as Borobudur, which I visited on Friday, and the weather (blazing sun) couldn’t have been more different.  There were a great many visitors, but not in such numbers as to spoil the visit. 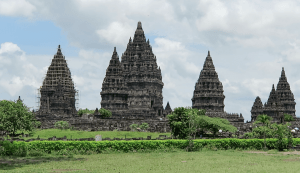 Pick a deity at the Prambanan temples

Back in Yogyakarta, I met up with some fellow language-lovers from Polyglot Indonesia on Saturday evening which was a lovely way to end my last full day on Java.

Sunday was overcast, but it didn’t start to rain until l was inside the sultan’s palace in the “kraton” or walled town in the very centre of Yogya.  Yes, Yogyakarta still has a hereditary sultan, who is also the elected governor of the Yogyakarta special region of Indonesia. 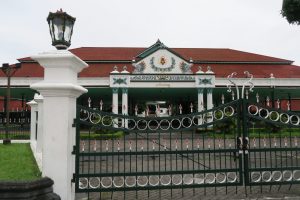 The sultan’s palace in the “kraton” (central walled city)

I was told that the court and its administration is a stronghold of the Javanese language, which is the main mother tongue in the city.  It has a beautiful script, developed many centuries ago from an even older script from the Tamil lands of southern India.

There is a token smattering of Javanese on signage throughout Yogya, though, visually at least, it’s very thin gruel (I’m not far enough ahead to say anything about what normally hits the ear first out and about in the city!). 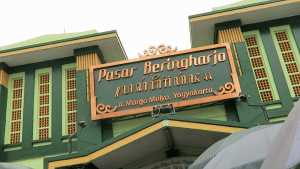 Sign in Indonesian and Javanese at the entrance to Berignharja market

Before the palace, I went to a great gift shop but resisted the temptation to stock up on souvenirs.

I then went to the central market, the Pasar Beringharja.  I love markets.  This one was packed with jewellery, fabric and clothes stalls.  The food section was a bit disappointing: very little fruit (and not much variety) and even less meat (very unappetising looking at that).  The one exception was the wonderful jumble of spice stalls. 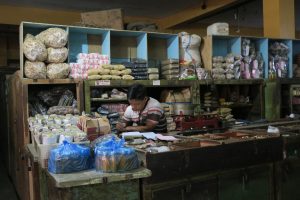 Spicing up my stay: at Beringharja market 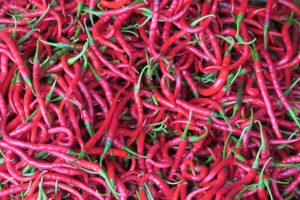 I also visited Vredeberg, the colonial-era Dutch fortress a few hundred meters north of the kraton, which had a great-looking café.

Back at my hotel, I grabbed a sandwich before I was picked up by the same driver from my language school who’d met me exactly a week ago.

At the airport bookstall I noticed this spoof edition of “Time” magazine on sale, proclaiming the victory of Donald Trump in the US presidential elections.  A bit far-fetched, wouldn’t you say? 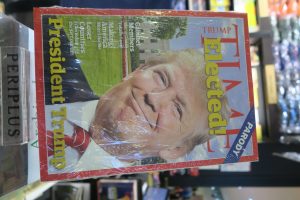 Suspension of disbelief, a pre-US election “parody” edition of Time magazine on sale at Yogya airport

There are four gates at the airport.  The first three are for domestic flights and open out on to the concourse with the bookshop and a couple of cafes.  I made the mistake of going straight through the passport check to the international gate, only to find no café at all on the other side.  So I sat for an hour editing video, waiting for my flight to Singapore to be called.  At quarter to five in the afternoon, the call to prayer sounded over the tannoy.

It was an atmospheric end to my first ever visit to Indonesia.  During the week, I’ve made a start with an interesting language and placed it in a living context.  I’ve met some great people and had a wonderful wider cultural experience.

Look out for a blog post later on the language learning aspect (my progress, the resources I’ve used and you could use yourself, and tips for similar short-stay language adventures abroad).

My first attempt at daily vlogging has also been a big part of the trip and here’s the final video to bring the experiment to a close.  Hope you enjoy watching it as much as I have making it.