After…ahem….something of a delay, I’ve finally edited a vlog on the Slovak language and exploring the sights of Bratislava. Besides seeing the sights, I’m busy trying to decipher Slovak.  The vlog is the latest in my “smash & grab” travel and language videos.  Most of the main attractions appear and city’s multi-cultural heritage comes out. Look out for beautiful historical buildings and some wacky Soviet-style modernist architecture. This video is also a fun illustration of how you can prise open one language with the help of another. 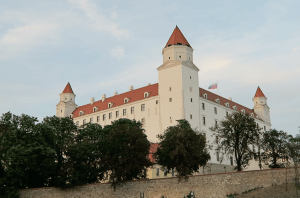 Such “intercomprehension” naturally works best when two languages share a common ancestor and have not changed too much over time (either through their own, internal development or contact with other languages).

The languages that eventually became English and Slovak’s have common ancestor. But they went their separate ways too long ago for you to get very far with the Slovak if you only know English.

It’s a very different matter if you want to make sense of the Slovak language and you speak Russian, Polish, Serbian-Croation…or any other Slavonic language.

The Slavonic languages are one big, closely knit family.

As a result, if you’ve learned ANY Slavonic langauge, you’ll find it a huge help when you learn the next one.

Here’s the good news broken down:

Of course, there are going to be real divergences between the languages as well.

Plus, you need to be alert for false friends (words which look the same but have a completely different meaning).

All in all, we still need a large dose of humility.

There’ll be lots we don’t understand and we’ll still get a lot wrong. 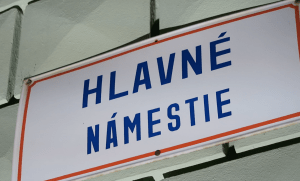 Caveats aside, though, you can find your feet much more easily if you leverage what you know of the Slavonic language that you know.

You could do the same if you were a Slovak leaner visiting Poland or Slovenia.

You can apply the same principles between closely related languages in other language families too.

It could be jumping from Spanish to Italian or Portuguese (in the Romance family – cousin French is further away).

It could be from German to Dutch; Finnish to Estonian; Welsh to Breton.

Or you could have learned Swedish and find yourself in Denmark, Norway, the Faeroes or Iceland.

Be on the lookout for vocabulary borrowings from other, unrelated language as well.

In one café I came across onion soup on the menu. Onion in Slovak is “cibuľová”. In Russian, totally unhelpfully, it’s “luk” (same root as the English word “leek”).

However, I have studied some Italian (“cipolla”) and Finnish (“sipuli”). 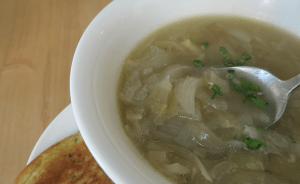 I got onion soup…..as I’d been able to guess that I would

Other borrowings may be modern, international words (often derived from Latin or English) that you’ll at once recognise.

With either type, if you’ve understood the spelling system in the language you’re more likely to see through familiar words in a cunning local disguise.

I illustrate all this in the vlog as I blunder around trying to decipher written Slovak on street names, shop signs, posters.

Pronunciation, I’m afraid, is a quite a different matter.  That’s why I’ve classed my “Slovak” as one of my “sights of Bratislava in this post’s title 🙂

One of the things I could have done in advance, was to learn how the circumflex and acute accents that I point out in the video affect pronuniation.

All the same, when it came to understanding the spoken language, I still felt myself at a huge advantage the few times I had to interact a little with shop assistants who didn’t speak English. 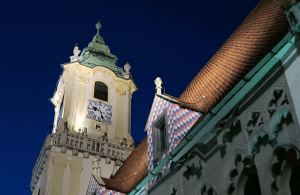 The Old Town Hall (Stará radnica) on the Main Square

Language wasn’t the only delight on my first visit to Slovakia.

The country has a rich history and multicultural heritage.  This is at once clear in the capital city.

Very close to the present Austrian border, Bratislava is at the intersection of German, Slovak and Hungarian speaking territories.

From the city’s origin until the 19th century, Germans were the dominant ethnic group and knew the city as Pressburg. The current Slovak lands were part of the domains of the Austrian Habsburgs.

Know as Pozsony in Hungarian, the city was an important Hungarian centre, as well. It was part of the independent Kingdom of Hungary and, later, the Hungarian part of the Habsburg empire. From 1536 to 1830 Hungarian kings (i.e. the Habsburg Austrian rulers) were crowned as Kings of Hungary in St. Martin’s Cathedral (look out for the Latin plaque in that church in the vid).

There was a Slovak national awakening in the eighteenth and nineteenth century.

The biggest linguistic changes came as a result of the tragic upheavals of the twentieth century.

At the end of the First World War, 40% of the population of Pressburg spoke Hungarian as their native language, 42% German, 15% Slovak.

Many people were bi- or tri-lingual.

After the formation of the independent Czechoslovakia in 1918, Slovakisation proceeded apace.

In 1938, 59% of population of Bratislava were Slovaks or Czechs.  Germans represented 22% and Hungarians 13% of the city’s population.

The other important historical group were the Jews, a thriving community before the Holocaust.

After the Second World War, most of the Germans and Hungarians were expelled or evacuated.

The result of these momentous changes is that, since the 1950s, Bratislava has been 90% Slovak speaking.

Yet as you walk around the town, old signs, museums and monuments are a reminder of Bratislava’s rich heritage.

See what you can spot in the vlog.

If you visit, you’ll also be able to take in a range of Socialist period architecture.

I can’t resist giving you a sneak preview of the Slovak radio HQ building: 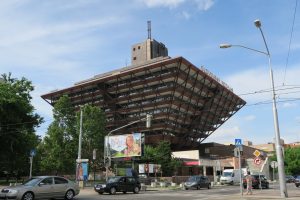 “Are you sure this pyramid from Ikea was supposed to go this way up, Štefan?”

Your experience of the city is going to be enriched not only if you’re alert to language, but also if you find out more about its rather complicated but fascinating history.

Here’s the vlog. I hope it inspires you to visit Bratislava and to hone your own language – and history – detective skills.