I’m now in my hotel room in Yogyakarta on the Indonesian island of Java on “day zero”, the eve of my week’s intensive Indonesian.

The flight from Singapore was smooth, made easier by the efficient civility of the airport there. I was pretty tired on board after only about four hours’ sleep last night and, as a result, I worked less on vocab that I’d have liked….I did try my hand a deciphering some of the signage, though.

One indication of where I was headed was the choice of coffee on board. We were only talking coffee bags here but there was a choice of four different beans. I went for the most local to this region.

Yogyakarta airport is small and we were all quickly through customs , baggage collection and customs (with no competition from other arrivals).  With my thing for hats (well, only on this blog), I couldn’t resist a shot of this sign: 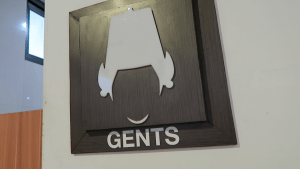 A “sophir” (driver) from my language school picked me up as promised. I hadn’t expected him to be accompanied by a “guru” (teacher).  Not sure if he’s the one I’ll have tomorrow but he was already teaching me a few expressions and working on my pronunciation during the journey to the hotel.

My hotel is just what I needed. It’s a bit “tired” and due for a refit (as I’d read on TripAdvisor) but it’s still not at all bad and the staff seem very friendly. The room is clean and comfortable. There’s a good bed, armchair and desk and good wifi. I’m not going to have any excuses for not studying hard and keeping you updated on my progress.

Once I’d unpacked, I found an ATM and withdrew some money. Even post-Brexit, the plummeting pound buys you 16,000 odd “rupiah” (I’m guessing that the name of the currency reflects Indian influence over here. Another word I learnt today was the word for “West”, which I was told simply means “India” in Sanskrit).

Duly funded, there was a fifteen minute cab ride across town for a meeting of the local Polyglot Indonesia group. I peered out of the cab window at ramshackle buildings, all manner of shops and signage, some of which you could have a good guess at.

Only three hours or so after I’d landed it was great to be sitting in a coffee shop with enthusiastic language learners. I spoke Russian with a woman from Ukraine and French with a Catalan woman, German and French with the Indonesians. Several regulars gave short presentations about their own “local” languages, including regional varieties of Javanese (the main mother tongue here in Yogyakarta). 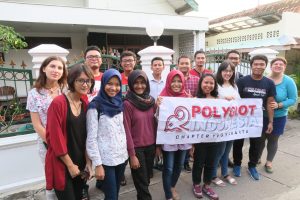 The coffee shop specialises in a delicate bean which has been, erm, processed through the innards of some sort of local racoon. Tasted great.

I felt very privileged afterwards to be invited to eat with three of the Indonesians who were at the meet up. One of them provided the transport.  Here I am, clinging on the back: 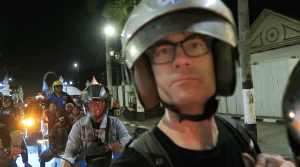 The food was great and very good value for somebody on a Western salary. There was more talk about language (in English) and I picked up a few more words, mainly greetings and menu Indonesian.

Now I’m back in my hotel room and hoping for a good night’s sleep. The real work starts tomorrow morning. I’m being picked up by the same driver at 9:45 and my first session is 10:15 to 12:00. I’ve no idea what to expect but I’ll let you know about it tomorrow!  The promised video’s ready and it’s a fun one….but it won’t upload.  Retrying now and will update this post with a link as soon as…..

Update (Day 1 – Monday morning): not so sure about upload speeds at the hotel.  My first attempt to upload the video failed last night after an hour or more but I woke up this morning to find that it had worked second time round.  Hope you enjoy it 🙂