Hello from Bratislava, capital of Slovakia.  I landed in central Europe from London yesterday for this year’s Polyglot Gathering.  There’s just time for an update about how my various long term language learning projects are going.  There’s also some news about one or two things I’ve got going on “below the radar”.  Why do you care? Well, I hope you’ll be encouraged in your own langauge learning by seeing me chipping away at it… With the internet and YouTube awash with gifted Polyglots showing off their 105 languages or getting fluent in Ancient Chinese before breakfast, here’s a reality check for fellow mortals.

I’ve been learning Basque for several years and it was last centre-stage on the site for Project Basque Intensive! my one-month residential course in the Basque Country.

I came out of that at the border between A1 and B2 and that’s more or less where I’d say I still am: a lower, lower intermediate student or, at least, a wannabe one 🙂

Since I left the Basque Country, I’ve been keeping up with one to one 30-min sessions with Joseba 30 mins via Skype booked through italki.

We usually do a mixture of general chat and revising the pdf materials I get in my “physical” Basque classes in London (a mixture of texts for reading, with questions and “fill in the gaps”-type grammar exercises).

If you want to keep going over the long term, it helps to move the focus away from achievement to establishing a habitual routine.  Mine is two sessions Basque sessions a week (Thursdays before work and Saturday morning).

My performance in the Skype lessons feels very up and down.

To move ahead, I’d need three or four sessions a week.  I’d need to do as much study as possible between them.  Yet it’s not a priority to invest that effort at this stage.

When you’re at the upper intermediate level, you can safely leave a language for years and years.

Not so before you get there.

With my lower intermediate Basque, then, I’m essentially consolidating and protecting the investment I’ve already made.

I’m still enrolled for the London Basque Society’s weekly Tuesday evening classes (where I started learning the language four years ago in September).

For the last year my attendance has been erratic, party because of travel and work because I find a two hour session without a break a bit too much.

I enjoy catching up with the teacher and my class mates and it’s good to use the language a bit face to face but after the summer break, I’ll have to be stricter about where my time and energy is going. 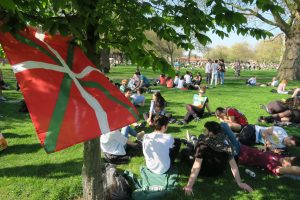 I’ll certainly be continuing my membership and support of the London Basque Society, though. I attend their events whenever I can and really enjoy the chance to use some Basque in real social situations and learn more about the culture.  A community context is the water that lifts your language boat.

In early April there was an evening of new short Basque-language films up in Haggerston in east London.

A couple of days later, there was a party at London Fields (a park in Hackney, also in east London) to coincide with the “Korrika” mass relay race to raise money for language promotion. The “Korrika” is held in the Basque Country every two years and each time follows a different route.

My main focus for the first half of 2017 is on improving my written Russian skills. I announced Project Write Russian Right back in January.

Regular readers will know that I passed four of the five “sub-tests” of the official C1 (“lower advanced”) level Russian language exam (the TRKI 3rd Certificate) in summer last year.

I’ll be re-taking the 70-minute, three-question paper here in London on the second weekend of July.

I’ve resumed work with the two on-line teachers who helped me last year: eleven one-hour lessons with Andrei six half-hour lessons with Mikhail (all mainly in March and May). Last week I also started working with a third italki teacher, Vsevolod, with whom I’ve had two half-hour sessions.  That’s a total of  fifteen and a half hours of on-line lessons.

My difficulties with written Russian are still pretty much as I described them in the post-mortem last summer and I will return to them in a fuller piece on intermediate to advance Russian writing after this year’s exam.

As is typical at this level, though I am making progress, it’s difficult to feel because the battle front is so broad. 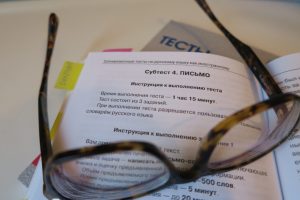 Not quite in focus….my written Russian

I’m doing some extra grammar exercises but, this time, I’m focussing much, much more on practising writing in the format required in the exam within the prescribed time limits.

I do the written work by hand and then (and this is time-consuming) type up the texts in Google Docs.

My teachers then correct them with me live during on-line lessons.

I’ve also been watching Russian films and TV serials, listening to a lot of radio and reading Russian on my thrice-weekly commute to the office.

I pretty quickly abandoned my attempt to expand my vocab with a trial the Gold List method, as I had hoped to do.

The problem was that it proved far too cumbersome to lift and research words and phrases lifted out of a contemporary Russian novel for listing. This is no criticism of the method in itself, to which I will return.

Now, as I set out what I’ve been doing in black and white, it looks like a steady commitment to this retake but it doesn’t seem like nearly enough.

I feel just as I did last year: the writing paper could really go either way. If I fail a second time, though, I’d have to retake the whole thing.

Advanced German in use

I haven’t written about German since my (successful) shot at the Goethe C1 exam the December before last. As I focus on Russian, my German is now in “maintenance mode”.

This means occasional radio while pottering about the house and half-hour Skype chats with Laura, one of my regular teachers. I try to keep a regular slot for this: Friday morning before I set out to work. We’re now 22 weeks into the year and I’ve managed ten sessions so far, so I’m averaging out at once every two weeks or so.

Towards the end of April I had to be in Hamburg for a day with work and I decided to expand the trip by taking a six days out beforehand further south.

First, I was back in Heidelberg. 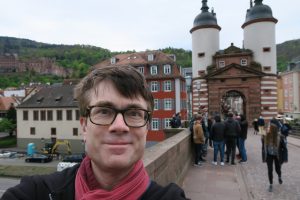 A Heidelberg ruin…and, in the background, the Old Bridge and Castle.

Many moons ago, I lived there for three years and I still have several friends in the area. Two couples in the town itself and another couple in the historic town of Speyer, only about half an hour away by train. I met up with them all and their young (or, in some cases, already teenage) families. We spoke German all the time and it was lovely to catch up and, to some extent, to reminisce about old times.

On my latest trip to Germany, I used the language out and about a lot too: having my hair cut, in the hotel later in Hamburg. People didn’t switch to English, which is a good sign. I’m always worried that people are going to switch to English, which always feels like such a demotivating criticism of one’s efforts. That didn’t happen at all this time, which I take as a good sign.

On the way up to Hamburg, I stopped off in Marburg for a night with Elena and Alexei, a Russian couple I know from my days in Moscow. In Marburg I was mainly speaking Russian…..and Welsh. (Elena is a specialist in Medieval Welsh now based at Marburg University.) 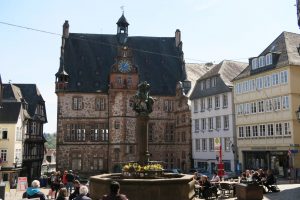 Marburg – and ideal place to practise Russian and Welsh

Below the radar, I’ve also been “dabbling” in other languages.

I’ve been learning Portuguese at a very low level since my first trip there in 2010. I’ve had eight 30-min sessions with Joel this year. They’ve been great fun (even though my Italian (not touched for over ten years) seems to keep making its presence felt.

I’ve also been having sessions with Zacky, the Indonesian teacher I met in Yogyakarta when I was on the “Minimmersion Indonesian” project last year. We’ve had eight 30-min sessions so far this year.

The next Polyglot Conference will be Reykjavik in October and, in anticipation of that, I’ve been making a first acquaintance with Icelandic. I’m finding it a fascinating language: it’s German on steroids. I love seeing the parallels with earthly English words. Bida is to wait (we say in English “to bide your time”). This year, I’ve had seven 30-min sessions with Oskar. We’ve been focussed exclusively on the pronunciation of the conversation transcripts in the early chapters of Colloquial Icelandic.

And finally….during my thrice weekly half hour run round my local park, I’m listening to the complete Greek audio course from Mikhael over at Language Transfer.  He’s using a direct method along the lines of Michel Thomas or SaysomethinginWelsh.  I’ll write more about the method later.

Needless to say, my level of engagement with these languages is too limited to be able to clock any progress….but that’s not my expectation.  I’m enjoying the discovery and putting down a marker for the future.

Earlier in the year I got involved in a new group, “Languages of London”. This has grown out of the Polyglot Pub event founded by Olly Richards.

The aim of the new group is to bring together people in London, and the wider UK, with a shared love of languages.

The meetings so far have simply been social events at a swanky cafe but we’re planning more formal events in the future.

Call by if you’re going to be around on 8th June, 6th July, 3rd August…. Again, it’s something informal, for anybody who loves languages. More details in the new Facebook group or the meetup page. 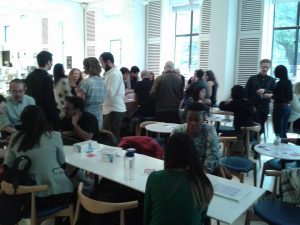 The visit back to Heidelberg coupled with a significant birthday got me thinking about the passage of time and how a life of language learning pans out long term.

It’s going to be the topic of my talk at the 4th Polyglot Gathering. My title is “Fluent in three decades: the joys of lifelong language learning”.

As I’ve noted in my reviews in the past, everyone who is enthusiastic about learning languages is welcome at the Gathering. If you’re interested (or reading this after the event and looking to attend in future, check out their website and the reviews from previous years on this site (plus my vlog from last year).

When I get back to London, I’ll have exactly four weeks till the Russian exam. Pretty much all my language efforts will be going on further ramped up preparation. I have lessons booked and the three “past papers” ready to re-do.

Is that light at the end of this tunnel, or an oncoming train?

In the meantime, Polyglot Gathering, here I come. My pencil is sharpened and my camera is ready to roll. To set the scene, here’s the five minute edit of my full vlog from last year: