A key to success in language learning is don’t be afraid.  Jump in and have a go!  That’s just what a great bunch of language enthusiasts did at the Polyglot Gathering in Berlin when I challenged them to practise their German pronunciation.  The result?  A new fun video, the “Howtogetfluent.com German pronunciation challenge”.

You can dive straight in by clicking on the YouTube screen at the bottom of this post but before you do, here are a couple of tips for getting started speaking – and reading – German.  They’re relevant for other languages too.

Each langauge has its own sound system.  You’re going to be moving and shaking your tackle in ways you’re not used to.

New sounds: it’s part of the fun that’s really worth paying attention to very early on in your language learning.

Don’t be tempted to ignore the pronunciation section in your phrase- or textbook.

Since it’s very difficult to practise the sounds of a language just from a description on paper, always choose materials which come with audio files.

Get down among the “natives” but….

….take time out too for focussed work “tuning” your voice and  your ear.  If you can get a native speaker to help you – best of all a trained specialist – go for it.

You don’t have to sound like a native.  You do want to be understood.

For that intonation, tone, stress, and rhythm can be all important too.

On the pronunciation element: focus on sounds that are alien to your own language.

They may be completely new sounds (such as the soft “ch” [ç] which pops up in Quietscheentchen (rubber duck), to take a random example).  This sound also comes up in “Brötchen” (bread roll), along with that difficult German “o” [ø:]….and we meet both in “Eichhörnchen” (squirrel), too.

They may be fine distinctions which your brain may tell you are one sound simply because the contrast is not significant for meaning in the sound system of your own language. So the English “s” and “th” are difficult for Germans while “b” and “v” are difficult for Spanish natives.

These can be trained by focussing on what are called “minimal pairs” – two words with just one, crucial, sound difference: sink/think; bowel/vowel.

Part of the fun in the video was difficult pronunciations combined with those long words so typical of German.

No wonder you can see people taking a step back from the net in the vid. as I flashed orange cards at them with one string of letters after another.

The key here, though, is to realise that part of what we’re dealing with is a writing convention.  English too often juxtaposes two concepts to create another, usually related one.

They sound just as long as the German words, it’s just that we write them separately: nail polish (“Nagelpolitur”)

Or we hyphenate them: self-portrait (“Selbstporträt”).

Or we do a bit of both: five hundred and fifty-five (“Fünfhundertfünfundfünfzig”).

Or we do just what the Germans do and run ’em together into new, “compound” words: matchbox (“Streichholtzschechtel”).

As if this inconsistency wasn’t enough for poor English learners, they also need to be aware that sometimes English doesn’t take this approach at all, but spells a concept out rather in the style of the Latin-based languages: infraction of the speed limit (“Geschwindigkeitsüberschreitung”).

So, back to German – and other languages which coin “long” words at the drop of a hat, such as Finnish.

Compared with English, maybe it’s really not such a bad deal.

As your vocabulary of the more common, shorter words expands, the long ones will soon seem a good deal less intimidating. 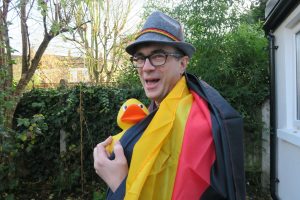 Talking of hats: do you like my new one?